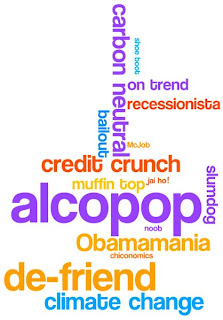 Image from Wordle.net
Language is a dynamic system.  Words can lose favour and become extinct or remain in some archaic form, eg

The adage “the exception proves the rule” does not mean that the exception establishes the rule, which is nonsense, but that the exception tests the rule, the original meaning of "prove". That archaic meaning remains in its original sense in the words proving ground, meaning a military test site for weapons.
Who doesn’t cringe when they hear or sing the words to our national anthem “our home is girt by sea", a matter already mentioned in an Auistralia Day post.
The original wording of The Ode by Lawrence Binyan was “Age shall not weary them, nor the years contemn..”, "contemn" meaning despise or scorn. These days the word used in The Ode is condemn.