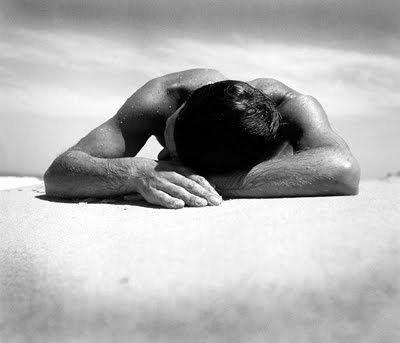 Max Dupain (1911-1992) has been described as one of Australia’s greatest photographers. Born in Ashfield, he was given his first camera at age 13, beginning a life time passion for photography. On his death he left a legacy of over one million photographs.
Dupain’s photographs are characterised by simplicity and directness, sharply focused and dramatic images with bold composition.
Although his works are wideranging, including images of landscapes, beaches, nudes, still life and architecture, he is best known for his portrayals of Australians, especially in the context of beach culture.

Dupain’s most famous work, Sunbaker, was taken in 1937, a photograph of his friend Harold Salvage lying on the beach at Culburra.

The National Gallery of Australia, which purchased the work in 1976, says this about the national iconic image:

Sunbaker was taken while he was on holiday at Culburra, on the New South Wales South Coast, in 1937, a year of popular optimism before the War.
The sunbaker is completely relaxed and at one with the land. He lies with his back exposed to the sun, seawater and sweat sparkling on his skin. Dupain used a low-angle shot, which transforms the simple shapes of the man’s oval head and triangular torso into a mountain-like outcrop set against the horizon.
This image was inspired by the work of European modernist photographers, who were more interested in exploring abstract form than in making descriptive photographs.
Sunbaker has become a national image. The classical simplicity of the figure replaces the cliches of athletic masculine imagery.

Posted by BytesMaster at 5:09 AM