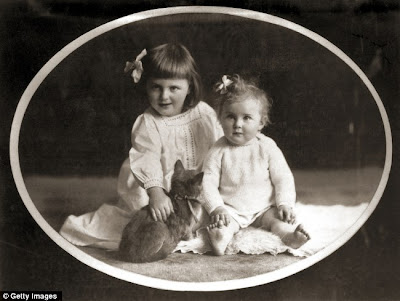 (Click on pics to enlarge).
Today’s youth probably only know of Eva Braun as the name of a cocktail in Fawlty Towers, that marvelous episode entitled The Germans, when Basil develops concussion and upsets his German guests.
London’s Daily Mail yesterday published previously unseen photographs of Eva Braun (pictured above, right, with sister Ilse in 1913), Adolf Hitler’s long time companion. Having met Hitler in 1929 when she was 17, she became his companion in 1931 and moved in with him at the Berghof near Berchtesgaden in 1936. Kept hidden from the German public, Hitler married Braun in the last days of WW2, on 29 April 1945. Forty hours later they both committed suicide in a bunker in Berlin.
Those who have watched Band of Brothers will recall the American soldiers grabbing what they could at Hitler’s Eagle’s Lair, including Hitler’s personal photo albums.
Pretty much the same happened with the Braun photographs, only in this case the albums were seized by the US Army and deposited in the National Archives, where they lay for 65 years unrecognised. Reinhard Schulz, collector and curator of photography stumbled across the images while researching seized records for an exhibition on Heinrich Hoffman, the official photographer for the Nazi Party.
Braun liked to sunbake and swim in the nude at the Berghof, activities frowned upon by Hitler. He also disapproved of her smoking but, because he was absent from the Berghof a lot, she was able to indulge in these activities.
The photo albums of Eva Braun show her from infancy through to the later years with Hitler.
The questions remain: Did she know what a monster Hitler was? How much of the evil of the Nazi regime did she know. And what was it in her own makeup that attracted her to Hitler?
The story can be read at:
http://www.dailymail.co.uk/news/article-1364687/Id-walk-million-miles-Rare-images-Hitlers-wife-Eva-Braun-party-mode-unearthed.html 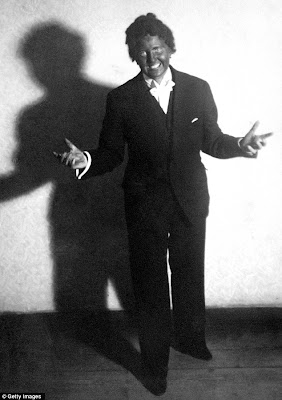 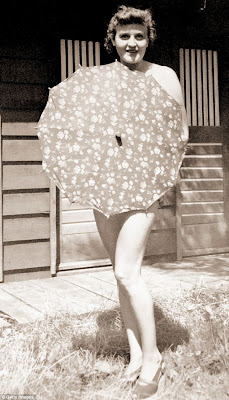 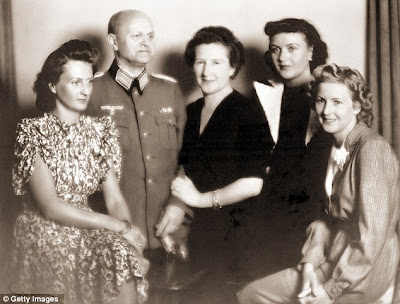 Eva Braun with her parents, Friedrich 'Fritz' and Franziska (centre) and her sisters Ilse (left) and Margarethe Gretl (second from right) in 1940 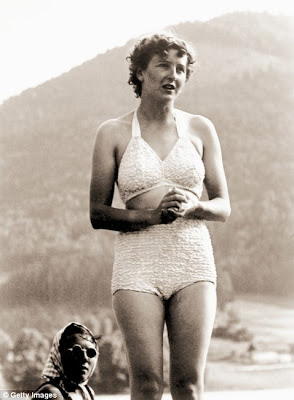 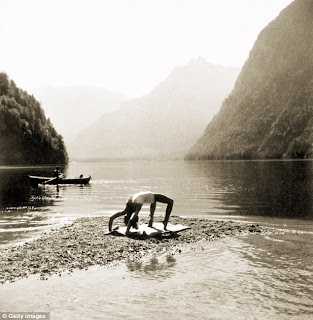 Exercising at Konigssee, Berchtesgaden, Germany, 1942.  The lake is 4 miles from Hitler's Berghof. 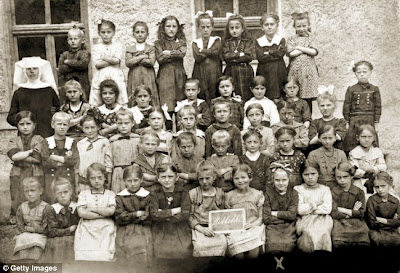 Eva Braun (first row, fourth from the right, cross at the bottom of the photograph), aged nine with her classmates at the Beilngries convent school in 1922.
A comment from one reader of the Daily Mail seems apt, click on the photo and view the enlarged version:
"Those kids have evil eyes, every single one of them! Eek!"
My wife commented that she thought they were sad eyes.
Form your own opinion.

An enlargement of Eva Braun in the previous photograph.

Posted by BytesMaster at 9:23 PM