Once again we have seen tragic loss of life and property from a tsunami.
I do not recall the term ever being used when I was younger, in those days anything in the nature of a large wave was called a tidal wave. That is no longer the case.
Following are some facts about tsunami:

• The word tsunami dates from 1897 and is Japanese from tsu, meaning harbour, and nami, meaning waves. The plural can be tsunami or tsunamis.
• The term tidal wave has fallen into disfavor in recent years in that tsunami have nothing to do with tides. A tidal bore is a phenomenon in which a tide creates an actual wave travelling up a river or narrow bay. A huge wave can also be created by a coastal surge from a meteorological event, such as a tropical cyclone. To that extent they can resemble a tsunami in that all comprise waves of water travelling inland. A tsunami, however, is a series of ocean waves with very long wavelengths (typically hundreds of kilometers) caused by large-scale disturbances of the ocean, such as earthquakes, landslides, volcanic eruptions and explosions. A tsunami can also be caused by an above ocean event, such as impact from a meteorite.


• Because Japan sits in an area where several continental and oceanic plates meet – the Pacific Plate, Philippine Plate, Eurasian Plate and North American Plate – it is located in a volcanic zone so active that it is nicknamed the Pacific Ring of Fire. This also accounts for the numerous earthquakes experienced in and around Japan with resultant tsunami. Japan has suffered an estimated 200 recorded tsunami in its history.

• In October 2004, an earthquake with a magnitude of 6.8 struck the Niigata region in northern Japan, killing 65 people and injuring more than 3,000. That was the deadliest quake since a magnitude 7.3 tremor hit the city of Kobe in 1995, killing more than 6,400.

• Most commonly tsunami are caused when underwater tectonic plates,  which are moving at a rate of about 10 centimeters a year, bulge under strain, causing tectonic uplift. Eventually the plate slips, causing subsidence and releasing energy into the water which then cause the tsunami waves. 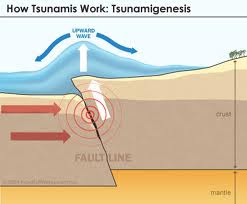 • Because tsunami have wide wavelengths, often hundreds of kilometers wide, they have a very they usually only cause a slight swell at sea, up to 30 centimeters in height. They are therefore rarely noticed at sea. Whereas at sea the tsunami waves travel at up to 500 kilometers per hour, as they approach shallower water they compress and slow. The wavelength becomes compressed to about 20 kilometers, the speed slows to about 80 kilometers per hour but the height increases. When the wave hits land it further slows and increases in height.

• A large tsunami may feature multiple waves arriving over a period of hours, with significant time between the wave crests. The first wave to reach the shore may not have the highest peak.

• The temporary rise in sea level when the tsunami reaches land is called the runup. The first part of a tsunami to reach land may often be a trough, called a drawback, which causes the water along the shoreline to recede dramatically. Persons unaware of the significance may often remain on the shoreline sightseeing or gathering fish.