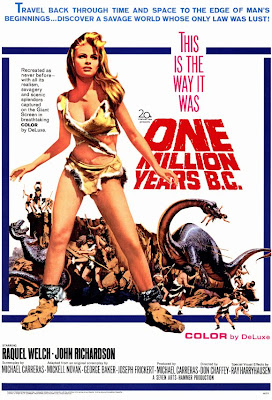 One Million Years BC (1966)
Comment:
I tried to think of a movie that had One Hundred in the title for Movie Moment #100 but couldn’t come up with anything.  So instead I am posting something about the Raquel Welch film One Million Years BC, think of it as 100 with some extra noughts. Okay, so dinosaurs lived 65 million years ago and cavemen kicked in about 200,000 years ago, it still makes for stirring stuff to see them fighting each other.  And as the special effects king Roy Harrryhausen said of King Kong (1933 version), “professors probably don’t go to see these kind of movies anyway.”  Raquel Welch in her makeup may not be an accurate depiction of a woman of one million years BC but her pose in her stone age bikini became a 1960’s iconic image.  As the movie poster says, “Travel back through time and space to the edge of man’s beginnings . . . discover a savage world whose only law was lust!”
Synopsis:
Tomak, the blue eyed, square jawed hero, gets thrown out of the Rock Tribe through skullduggery, but that’s not too bad because he hooks up with Loana of the more advanced Shell tribe.  Together they battle the bad guys, the dinosaurs and the landscape, including volcanoes.
Cast:
Raquel Welch and. . .  and . . . ?
Quotes:
Apart from “Oogha oogha”, there is a decided lack of quotable material.  The word “Akita” is mentioned a number of times by the Shell tribe people, usually while pointing at something in alarm.
Link:
Fighting the T Rex:
http://www.youtube.com/watch?v=W2bgeq6hAlU
Raquel Welch visuals set to Loreena McKennitt’s Night Ride Across The Caucasus:
http://www.youtube.com/watch?v=DkdBOvhgp04&NR=1
Trivia:
This was Hammer Film’s 100th production – how’s that for the 100th Movie Moment?

Posted by BytesMaster at 8:35 PM