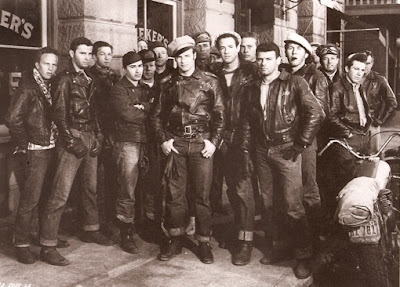 The Wild One (1953)
Comment:
As noted above, the movie is based on a short story which, in turn, was based on a trumped up account of the alleged 1947 Hollister riot, complete with staged photographs.  The movie boosted the sale of black leather jackets (the style even became known as a "Brando"), Triumph motorcycles, jeans, sunglasses and. . . white caps.  The movie is interesting in its own right but more so for its influence in popular culture and history.
Synopsis:
When rival biker groups, The Black Rebels and the Beetles, descend on the sleepy town of Wrightsville, incidents between the two gangs and with the townspeople escalate into fullscale confrontations, violence and tragedy.  Oh, and Johnny, the leader of the Black Rebels, falls in love with the police chief’s daughter.  A modern day Romeo and Juliet with leather and chrome.
Stars:
Marlon Brando, Lee Marvin, Mary Murphy
Quote:
Mildred: What're you rebelling against, Johnny?
Johnny:Whaddya got?
Link:
Johnny meets Kathie:
http://www.youtube.com/watch?v=yCENBce_dls
Trivia:
·       Brando’s haircut in the film inspired a craze for sideburns that was followed by James Dean and Elvis Presley among others.
·       Presley modeled his role in Jailhouse Rock on Johnny in The Wild One.
·       There are suggestions, including from George Harrison, that the name of Lee Marvin’s gang in TWO, the Beetles, inspired the Beatles.  At the time Buddy Holly and the Crickets was topping the charts, they adopted the Beatles but changed  the “ee” to an “ea” to reflect beat music and the beat culture.  A detailed commentary here:
http://www.recmusicbeatles.com/public/files/bbs/name.html

Posted by BytesMaster at 8:12 PM