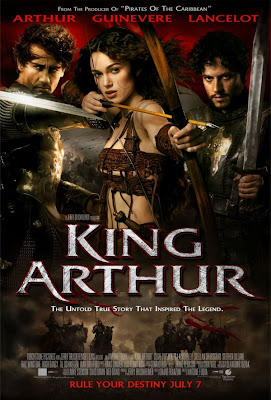 King Arthur (2004)
Comment:
I have been a fan of Roman films since I first saw the 1954 pic Demetrius and the Gladiators (on the Teev, not on first release).  The Robe, Quo Vadis, Gladiator, Ben Hur, Spartacus, even Life of Brian.  Three of the best have Roman pics are recent releases.  One is King Arthur, the other two will be posted in Bytes during the coming week so I will leave you in suspense until then.
“What?” I hear you cry as one.  King Arthur is a Roman pic??  Well, strictly it’s not a traditional sandal and sword but it does give a different, and interesting, twist on the Arthurian legend.  It’s supposedly based on new archaeological findings and puts Arthur in Roman times instead of in the medieval days of knights.
Although many of the film’s elements are based in fact, the weaving together of various themes and the characterisation of the origin of the Arthurian legend are strictly Hollywood, much too detailed to analyse in a short commentary.
Nonetheless it is a better than average pic, a good action film and with a script that has elements for thought.
Synopsis:
Clive Owen plays Artorius Castus, a Roman cavalry officer, the son of a Roman father and Celtic mother, stationed in Britain in 467 AD. Arthur and what remains of his men are part of a Roman force that guards Hadrian’s Wall against the Woads, (Picts),  native Britons led by Merlin, who are rebelling against Roman rule.
Arthur and Merlin form a pact, assisted by Merlin’s daugter Guinevere (a kick arse Keira Knightley), to fight against the invading Saxons.   As the bond with the Woads strengthens, Arthur’s belief and faith in Rome becomes tested.
Quote:
[Lancelot's plans for the future]
Lancelot: Well, if this woman of Gawain's is as beautiful as he claims, I expect to be spending a lot of time at Gawain's house. His wife will welcome the company.
Gawain: I see. And what will I be doing?
Lancelot: Wondering at your good fortune that all your children look like me.
Gawain: Is that before or after I hit you with my axe?
Link:
Trailer:
http://www.youtube.com/watch?v=-N6pZX0sDAk
Trivia:
According to Ioan Gruffudd (Lancelot), the camera operator wore a motorcycle crash helmet and was constantly surrounded by men with riot shields because of the intense action sequences happening around him.