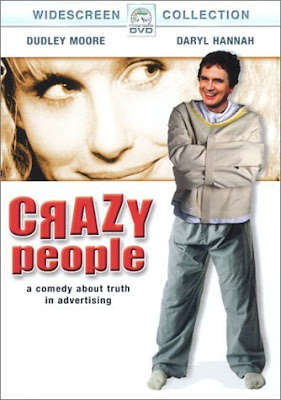 Crazy People (1990)
Comment:
An interesting film with a rare theme:  truth in advertising.  This movie looked at the subject long before The Gruen Transfer and it will leave you questioning ads for a long time after viewing.
Synopsis:
Emory Leeson is an advertising exec who has a nervous breakdown.  Faced with deadlines for various ads, he cracks up and tells the truth.  He is shipped off to a psychiatric hospital but, by error, his truthful ads get published.  Examples: Jaguar – “For men who'd like hand-jobs from beautiful women they hardly know." and “Volvo — they're boxy but they're good."  To the astonishment of the advertising world, they are a success.  The public likes the innovation of being told the truth.  Emory’s firm tries to capitalise but none of them are able to work with truth, so Emory is again recruited.  He gets his fellow inmates to assist and they come up with such ads as one for a Greek travel agency: "Forget Paris. The French can be annoying. Come to Greece. We're nicer." One for the Bahama’s national tourism board states "Come… IN the Bahamas."  For a new horror movie called The Freak, the ad campaign states: "It won't just scare you, it will fuck you up for life!"
Cast:
Dudley Moore, Darryl Hannah
Quote:
Kathy: Hold me. Please hold me.
Emory Leeson: I am holding you.
Kathy:  I know, but it's a woman thing. I have to say it.
Link:
The other inmates become involved:
http://www.youtube.com/watch?v=HWoy1Rfq5Oo
Trivia:
John Malkovich was originally cast in the part of Emory Leeson but walked off the set due to personal problems.