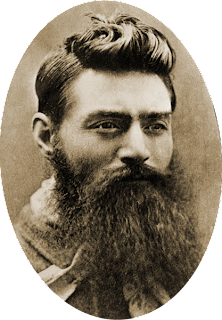 Although Ned had been captured, the battle with those in the Glenrowan Inn continued. 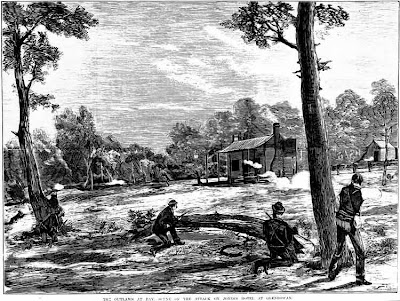 1880 newspaper illustration of the siege at Glenrowan
Superintendent Sadleir, in charge of the siege, sent to Melbourne for a cannon but it did not arrive in time.
At 10.00am the police called on innocent persons to leave the hotel.  According to Sadleir, they came out “buzzing like bees.”
At 4.00pm the police decided to burn down the Glenrowan Inn.  As they piled straw against a wall of the hotel, Kate and Maggie Kelly, Ned’s sisters, arrived.  Kate was asked by Superintendent Sadleir what they were doing here and Kate answered that she wanted to see Dan.  She was asked to invite him to surrender.  She turned to Superintendent Sadleir and said angrily “Surrender to you fucking dogs?  No! I would sooner see him burnt alive!”  She was then forced back and the inn was set alight. 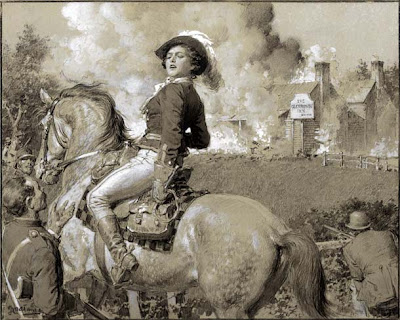 Kate Kelly, an excellent horsewoman, arriving at the Inn.
A Catholic priest, Father Gibney (later Bishop of Perth), who was passing through Glenrowan by train, was overwhelmed by pity for the people inside and he entered the burning hotel, against the demands of the police.  He found the dead body of Joe Byrne, which was removed by a black tracker, and Martin Cherry fatally wounded.  He administered last rites to Martin Cherry, who was also removed from the burning hotel.
In a back room he found the bodies of Dan Kelly and Steve Hart, side by side.  He said that they looked as if they had just shed their armour and that he believed that they had suicided by poison, not seeing any wounds or blood.

The remains of the Glenrowan Inn after the fire
The charred bodies of Dan and Steve were lifted from what remained of the inn after the fire and were taken to the Kelly and Hart families in Greta.
The Melbourne Herald reported:

The scene at Greta was indescribable. The people seemed to flock from the gum trees. There were some of the worst looking people I have ever seen in my life. The two bodies were carried into Mrs Skillion's hut, amid the wailing and groaning of over 200 people. They were laid on the table side by side - a dreadful sight. Their friends rushed to the hut to get a glimpse of them, but Mrs Skillion took down a gun and threatened to blow out the brains of the first person that entered the house without her permission. She then only allowed three at a time to enter. The first who went in were two girls and an old man, a relative of the Harts. He cried like a child. Then Tom Lloyd took Kate Kelly's hand and lifting his right hand to heaven he swore a dreadful oath that he would never leave their bodies unavenged.

The police subsequently wanted to get the bodies back and sent 16 troopers to Greta.  Fearing that such a move might result in a further shootout, the order was countermanded and the police returned to Melbourne.
Both Dan and Steve were buried in unmarked graves in Greta Cemetery.  Steve was 21 years old when he died.  Dan was aged 19.
Because their bodies were so badly burned, making identification impossible, there have been claims and claimants over the years that one or other, or both, escaped from Glenrowan Inn and that the bodies were of persons unknown.  Most experts dismiss such claims and none have ever been substantiated.
Joe Byrne’s body was propped against the door of the lockup at Benalla and tied with flag pole rope.  His soft and gentle features were in contrast to his clenched fists, blood stained hands and bloodied trousers.  Joe’s body was photographed by the press and looked at by the curious. 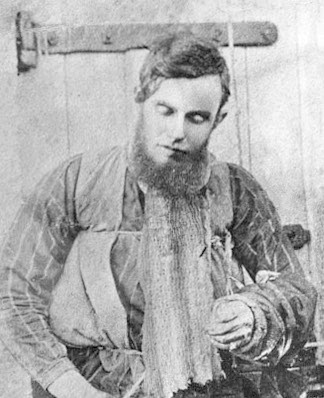 At one stage a young girl burst through the crowd, stood in front of Joe’s body and cried “End the circus.”  She was led away in tears and was never identified, although one writer present thought it was Maggie Kelly.
In the space of four days, Joe Byrne had murdered his best friend, had lost his friends and fellow gang members, had lost his own life and then had his remains treated as a spectacle.
Still one further final sadness awaited.
Mrs Byrne, Joe’s mother, who had frequently been visited by Joe notwithstanding that he was outlawed, often under the noses of police keeping watch, refused to claim Joe’s body.  Although friends wanted to claim his body, the police refused to hand it over, fearing that a funeral would become a rallying point for rebellion and further violence.  He was buried in Benalla Cemetery in an unmarked grave, on the same day as the burial of Aaron Sheritt.  A marker has now been erected, the only one of the four Kelly gang members to have a marked grave.

Posted by BytesMaster at 8:58 AM