Prince William, his bride Kate Middleton, her parents Carole and Michael, sis Pippa l’derriere and her brother James, have been spending some time in the snow in France.  A story about Carole’s headwear gives me the excuse to repost a classic bit of humour . . .
The news item:
“Given that the Duchess of Cambridge frequently raids her mother’s wardrobe, perhaps this is Carole Middleton’s way of getting her own back. The 57-year-old wore an unusual fur headband around her white safety helmet during a family holiday to the upmarket French ski resort of Meribel. While Kate, 30, and her husband were both sporting rather more mundane black protective headwear, Mrs Middleton’s choice of fluffy accessory made her stand out on the slopes.”
- News report, Mail Online 09.04.2012
http://www.dailymail.co.uk/femail/article-2127050/Carole-Middleton-skiing-trip-freebie-fur-hat-meant-Kates-engagement.html#ixzz1rX4kJzWh 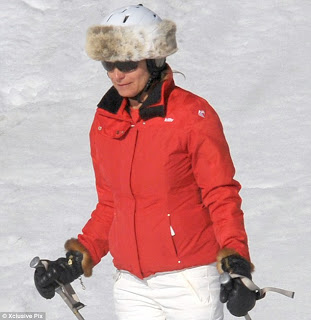 Freebie: Carole's helmet headband was originally destined for Kate's head when it was sent to the Middletons from British firm Fosi 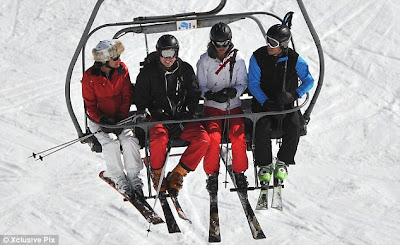 Family affair: Carole Middleton, left, enjoys a quiet moment on the ski lift with the Prince William and her daughter Kate, centre, aswell as her brother James, right.


The oldie but goodie:
On the last occasion that Prince Charles visited Australia he attended a function at Wagga Wagga where he was met by various dignitaries, including Wagga Wagga’s Mayor.
Whilst having a cocktail the Mayor said to the Prince “Your Highness, it’s quite a hot day and yet you have chosen an unusual style of headwear, a fur cap. Isn’t that quite hot and uncomfortable?”
“Well, yes, it is actually,” replied Charles, “but it was Her Majesty’s idea.”
“Her Majesty told you to wear it?" asked the Mayor.
“Yes,” answered Prince Charles. “I spoke to Her Majesty by telephone this morning.  She asked me what I was doing today and I told her I was attending a reception at Wagga Wagga.  She said ‘Wear the fox hat.’ “

Posted by BytesMaster at 9:46 PM