Last year I posted an item for Easter about vintage Easter cards: 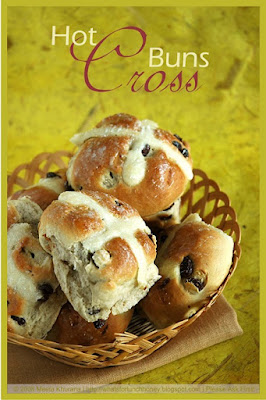 In many Christian countries, buns are traditionally eaten hot or toasted on Good Friday.  The cross on those buns is regarded as symbolic of the crucifixion.  An example is a comment in 2010 by Steve Jenkins, a spokesperson for the Church of England:  "You have got the bread, as per the communion, you have got the spices that represent the spices Jesus was wrapped in in the tomb, and you have got the cross. They are fairly full of Christian symbolism."

It is believed that buns with a cross predate Christianity and relate to alternative religions and festivals.  The cross, either X or  +,  is of ancient origin and connected with religious offerings of bread. This replaced earlier offerings of blood.
The Egyptians offered small round cakes, marked with a symbol depicting the horns of an ox, to the goddess of the moon. The Greeks and Romans had similar practices.  The Saxons ate buns marked with a cross in honour of the goddess of light, Eostre, whose name was transferred to Easter.
When archaeolgists excavated the ancient city of Herculaneum in southwestern Italy, which had been buried under volcanic ask and lava since 79 C.E., they found two small loaves, each with a cross on it, among the ruins.
The English word "bun" probably came from the Greek boun, which referred to a ceremonial cake of circular or crescent shape, made of flour and honey and offered to the gods.

Protestant English monarchs saw the buns as a dangerous hold-over of  Catholic belief in England, being baked from the dough used in making the communion wafer.  Attempts to ban the sale of the buns by bakers were unsuccessful, bing too popular, so that Elizabeth 1 passed a law permitting bakeries to sell them, but only at Easter and Christmas.
The following decree was issued in 1592, the thirty-sixth year of the reign of Elizabeth 1, by the London Clerk of the Markets:
"That no bakers, etc, at any time or times hereafter make, utter, or sell by retail, within or without their houses, unto any of the Queen's subject any spice cakes, buns, biscuits, or other spice bread (being bread out of size and not by law allowed) except it be at burials, or on Friday before Easter, or at Christmas, upon pain or forfeiture of all such spiced bread to the poor..."

Originally the cross on the buns was made by knife cuts prior to baking or by dough overlayed on the top.  Piping in with pastry came much later.

The buns were first known simply as cross buns, an example of such terminology surviving in Boswell’s 1791 Life of Johnson:  “Being Good Friday I breakfasted with him and cross-buns.'

The earliest recorded reference to hot cross buns is in 1733 in Poor Robin’s Almanack:


“Good Friday comes this month, the old woman runs,
With one or two a penny, hot cross buns.”

The street sellers called out not “one a penny, two a penny” as is the wording of the4 nursery rhyme today, but “one ha’penny, two ha’penny”, a half-penny being pronounced “hape-penny” (as it was in Australia when we were kids, prior to the adoption of decimal currency in 1966).  The call for the different prices probably reflected different sized buns. 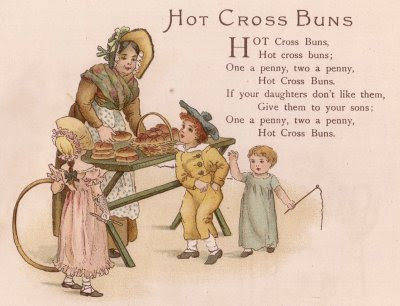 Superstitions regarding bread that was baked on Good Friday date back to a very early period. In England particularly, people believed that bread baked on this day could be hardened in the oven and kept all year to protect the house from fire. Sailors took leaves of it on their voyages to prevent shipwreck, and a Good Friday loaf was often buried in a heap of corn to protect it from rats, mice, and weevils.
Finely grated and mixed with water, it was sometimes used as a medicine.
It was also a common belief in England that hanging a hot cross bun in the house on Good Friday offered protection from bad luck in the coming year, do that it was common to see Good Friday buns or cakes hanging on a rack or in a wire basket for years, gathering dust and growing black with mould.

Posted by BytesMaster at 4:44 AM