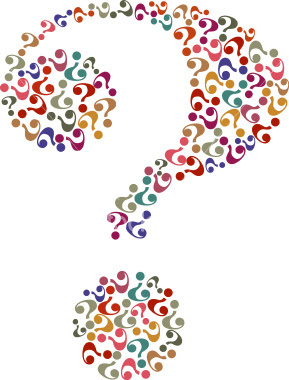 "The Answer to the Great Question of Life, the Universe and Everything is Forty-two," said Deep Thought, with infinite majesty and calm.

Q: What is Readers’ Week?
A: It is a week when all the posts are contributions from readers of Bytes.

Q: Who is today’s contributor?
A: Byter Nadia.

Q: Why do ships and aircraft use 'mayday' as their call for help?
A: This comes from the French word m'aidez - meaning 'help me' -- and is pronounced, approximately, 'mayday'.

Q: Why are zero scores in tennis called 'love'?
A: In France , where tennis became popular, round zero on the scoreboard looked like an egg and was called 'l'oeuf,' which is French for 'egg'. When tennis was introduced in the US, Americans (mis)pronounced it 'love.'

Q. Why do X's at the end of a letter signify kisses?
A: In the Middle Ages, when many people were unable to read or write, documents were often signed using an X. Kissing the X represented an oath to fulfill obligations specified in the document. The X and the kiss eventually became synonymous.

Q: Why is shifting responsibility to someone else called 'passing the buck'?
A: In card games, it was once customary to pass an item, called a buck, from player to player to indicate whose turn it was to deal. If a player did not wish to assume the responsibility of dealing, he would 'pass the buck' to the next player.

Q: Why do people clink their glasses before drinking a toast?
A: It used to be common for someone to try to kill an enemy by offering him a poisoned drink. To prove to a guest that a drink was safe, it became customary for a guest to pour a small amount of his drink into the glass of the host. Both men would drink it simultaneously. When a guest trusted his host, he would only touch or clink the host's glass with his own.

Q: Why is someone who is feeling great 'on cloud nine'?
A: Types of clouds are numbered according to the altitudes they attain, with nine being the highest cloud if someone is said to be on cloud nine, that person is floating well above worldly cares.

Q: In golf, where did the term 'Caddie' come from?
A. When Mary Queen of Scots went to France as a young girl, Louis, King of France, learned that she loved the Scots game 'golf.' So he had the first course outside of Scotland built for her enjoyment. To make sure she was properly chaperoned (and guarded) while she played, Louis hired cadets from a military school to accompany her. Mary liked this lot and when returned to Scotland (not a very good idea in the long run), she took the practice with her. In French, the word cadet is pronounced 'ca-day' and the Scots changed it into 'caddie.'

Q: Why are many coin banks shaped like pigs?
A: Long ago, dishes and cookware in Europe were made of dense orange clay called 'pygg.' When people saved coins in jars made of this clay, the jars became known as 'pygg banks.' When an English potter misunderstood the word, he made a container that resembled a pig. And it caught on.

So there, now you know.

Posted by BytesMaster at 1:10 AM