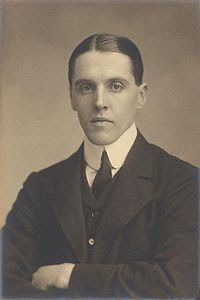 Judge: I've listened to you for an hour and I'm none wiser.
Smith: None the wiser, perhaps, my lord but certainly better informed.

Judge: You are extremely offensive, young man!
Smith: As a matter of fact we both are; and the only difference between us is that I am trying to be, and you can't help it.

Judge: What do you suppose I am on the bench for?
Smith: It is not for me, Your Honour, to attempt to fathom the inscrutable workings of Providence.

Judge: "Are you trying to show contempt for this court, Mr Smith?"
Smith: "No, My Lord. I am attempting to conceal it."

Frederick Edwin Smith, 1st Earl of Birkenhead, (1872 – 1930), commonly known as F E Smith, was a British Conservative statesman, barrister and skilled orator noted for his wit, pugnacious views, hard living and drinking. A close friend of Winston Churchill, he died at 58 from pneumonia caused by cirrhosis of the liver.

Posted by BytesMaster at 4:51 AM