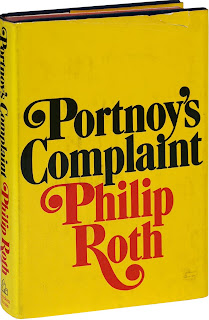 Last weekend my wife, Kate, was suffering the effects of the latest bug that has been going around. All of us in the family have had it and, in some cases, re-had it. I suggested that she take some of the Codral I had left but she declined, saying “I tried it once and it gave me palpitations.”

That passage from the work comprises the Bytes Tuesday quote.

In the interest of domestic harmony I will draw no further comparisons between Kate and Sophie Portnoy and will simply present the extract . . .

Even in the Chinese restaurant, where the Lord has lifted the ban on pork dishes for the obedient children of Israel, the eating of lobster Cantonese is considered by God (Whose mouthpiece on earth, in matters pertaining to food, is my Morn) to be totally out of the question. Why we can eat pig on Pell Street and not at home is because . . . frankly I still haven't got the whole thing figured out, but at the time I believe it has largely to do with the fact that the elderly man who owns the place, and whom amongst ourselves we call Shmendrick, isn't somebody whose opinion of us we have cause to worry about. Yes, the only people in the world whom it seems to me the Jews are not afraid of are the Chinese. Because, one, the way they speak English makes my father sound like Lord Chesterfield; two, the insides of their heads are just so much fried rice anyway; and three, to them we are not Jews but white-and maybe even Anglo-Saxon. Imagine! No wonder the waiters can't intimidate us. To them we're just some big-nosed variety of WASP! Boy, do we eat! Suddenly even the pig is no threat-though, to be sure, it comes to us so chopped and shredded, and is then set afloat on our plates in such oceans of soy sauce, as to bear no resemblance at all to a pork chop, or a hambone, or, most disgusting of all, a sausage (ucchh! ). .. But why then can't we eat a lobster, too, disguised as something else? Allow my mother a logical explanation. The syllogism, Doctor, as used by Sophie Portnoy. Ready? Why we can't eat lobster. Because it can kill you! Because I ate it once, and I nearly died!

Posted by BytesMaster at 9:14 PM