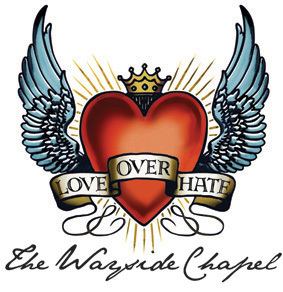 Whilst I pondered weak and weary on what to post today in Bytes, there came a visitor to my chamber door. Nahh, I don’t have a chamber door, ‘twas Kate with a coffee for me, only that and nothing more. But she did ask me to look into the origin of the phrase “fall by the wayside”. Having consulted many a quaint and curious volume of forgotten lore, here are some comments.

To fall by the wayside means to fail to be completed, especially from lack of interest.

The phrase “fall by the wayside” comes from William Tyndale’s 1526 translation of the Bible. Tyndale’s translation was the first English Bible to draw directly from Hebrew and Greek texts, the first English one to take advantage of the printing press and first of the new English Bibles of the Reformation. Sadly, 10 years later he was executed by strangulation for heresy and his body was burnt at the stake.

The passage from which the wayside quote comes is Luke 8:5.5:

A sower went out to sow his seed: and as he sowed, some fell by the way side; and it was trodden down, and the fowls of the air devoured it.

Jesus develops the parable by saying that the seed of the sower falls in various locations but that only the seed – the Word of God – that falls on fertile ground grows.

Which started me thinking about Onan, a minor Biblical character who has had a significant and profound effect on modern civilization.

Onan makes his appearance in Genesis 38. His brother, Er, was killed by God for being wicked so under the rules that applied to that society, it was his duty to get his brother’s widow, Tamar, pregnant. I kid you not. Onan’s father, Judah, told him to do the right thing and put a bun in Tamar’s oven but Onan wasn’t having it. Perhaps he had sibling issues, maybe he was worried about liability for future child support, but at the climactic moment he withdrew, one of history’s first recorded instances of coitus interruptus. According to Genesis 38:9, “Onan knew that the seed should not be his; and it came to pass, when he went in unto his brother's wife, that he spilled it on the ground, lest that he should give seed to his brother.” Another example of seed falling by the wayside, so to speak. This mightily pissed off God, who then slew him as well.

Remember the musical number in Monty Python’s The Meaning of Life? It includes the lyrics

Let the heathen spill theirs
On the dusty ground.
God shall make them pay for
Each sperm that can't be found

If anyone is wondering how the story with Tamar finished, here is an episode synopsis:

Judah told Tamar to live in his house with him and his wife until their third son, Shelah, grew up. After a long time, Judah’s wife died. When Judah went off to shear his sheep, Tamar put on a veil and waited at crossroads on the way to the sheep. She had seen that although Shelah had grown up, she had not become his wife. Judah, not seeing her face, thought she was a prostitute and asked to sleep with her, promising her a goat. She agreed, taking his staff and seal as security. She became pregnant and went back home. Judah, meanwhile, looked for the prostitute with whom he had slept so as to give her the goat and get back his possessions, only to be told that there was no known prostitute in the area. He headed home. Three months later he was told that Tamar was a prostitute and was 3 months pregnant. Judah hit the roof that his daughter in law was a prostitute. He ordered that she be burned to death. As she was led away she sent a message to him with his staff and seal, the message being that she was pregnant by the man who owned those items and asking whether he recognised them. He did, declaring that she was more righteous than he in that he had not given his son Shelah to her. She was freed and had twin boys, Pharez and Zerah, the ancestors of David. 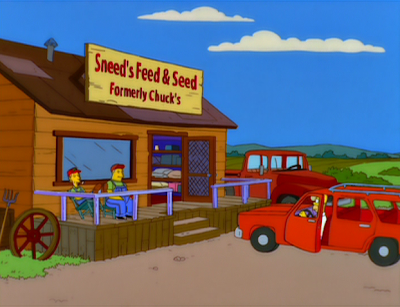 Oftentimes shows that are thought of as kids’ shows have risqué humour that only adults will detect and understand. That is the case with pantomime and it is also the case sometimes with shows such as The Simpsons.

In one episode of the Simpsons there is a sign for Sneed’s Feed and Seed, a convenience store close to the farm on which Homer grew up. They sell seeds, candy and many other products.

The sign says that the store was previously Chuck’s.

Posted by BytesMaster at 6:04 PM