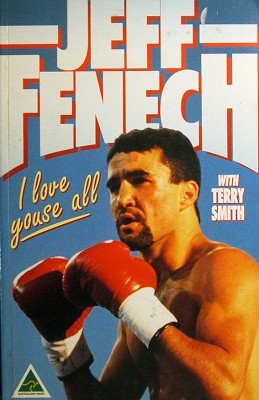 Australian boxer Jeff Fenech was born in Marrickville, New South Wales, in 1964. A street thug who made good in the boxing ring, he was known as The Marrickville Mauler. Upon his retirement in 1996 he had had 33 fights for 31 wins (21 by knockout), 2 losses and one draw. He had also been the holder of 3 world titles and has been inducted into the International Boxing Hall of Fame.

Defeating Thailand’s Samart Payakarunin a 1987 title fight, and in the process beating him to a bloody pulp, Fenech declared to the crowd “I love youse all.” It became the little Aussie battler’s catch cry but was later also used to satirise and ridicule him. In that same post match public utterance, Fenech declared

"With 12,000 of the most beautifullest people in the world cheering me on, it’s hard to feel pain."

By 1999 Fenech no longer loved youse all. Bemoaning that he wasn’t being given sufficient recognition, he stated that

“We’ve been having an argument for the last couple of weeks and I went over there to really try and fix things up and Peter was a little agitated still and said a few things and we got into a grappling motion and all of a sudden Peter threw a couple of punches. I threw one and I tried to punch Peter just in the chest to try and wind him or something but it kind of rebounded off his chest and hit him in the mouth. I’m getting several stitches put into my hand and hopefully my friend is alright and hopefully we can get it fixed up today and I can go over and help him.”