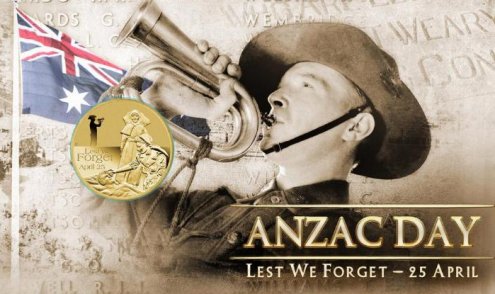 One of the sites I like to browse at every now and then is Cracked, a humour website that attracts over 300 million monthly page views. Don’t let the title turn you off, it is an interesting, entertaining and informative site. It can be viewed by clicking on the following link:
http://www.cracked.com/

So what does that have to do with Anzac Day? Cracked ran an item in March of this year that was headed “The 4 Most Inspiring Tributes to Spectacular Human Failure”. No 2 in that list was “Anzac Day in Australia and New Zealand".

Here is Cracked’s take on that day, a summary that encapsulates both the history and the significance in a few short paragraphs. It can be read at:
http://www.cracked.com/blog/the-4-most-inspiring-tributes-to-spectacular-human-failure_p2/
and reads as follows (caution: some swearing):

Every year on April 25, New Zealand and Australia have a holiday to honor the joint campaign of their respective countrymen to infiltrate the Ottoman Empire during World War I, and also the crushing failure of that offensive. The campaign was so poorly orchestrated right from the start that they ran aground on the wrong shore in complete darkness at the base of a heavily fortified cliff. Then, for eight months, the Turkish military picked them off from above until the ANZAC soldiers were finally evacuated. It was, in all respects, a disaster.

So why would anyone create an international holiday celebrating the worst military showing in the history of New Zealand and Australia? Well, partially because it's less a celebration and more of a day of remembrance for all lives lost in war, and partially because it's important to their national identity to remember that it wasn't their goddamn fault.

When the war started in 1914, Australia and New Zealand were dominions of Great Britain, which meant they were automatically thrown in with the Allied forces. Their introduction to the war was landing on that miserable beach and getting slaughtered for eight months under the command of British generals. In fact, just about everything that went wrong with that offensive was the fault of the British generals. Australian officer William Bridges realized after the first day what a terrible position they were in and urged British commanding general Sir Ian Hamilton to evacuate everyone, but Hamilton wouldn't allow it, opting instead to watch everyone explode around him (including William Bridges). The rest of the campaign was more or less the same thing.

So for Australia and New Zealand, April 25 is extremely important to their sense of independence, in a "I fucking told you so" kind of way. It's what made Australia and New Zealand realize they'd be better off standing on their own two (four?) feet, while simultaneously being a day of respect for everyone who suffered through war under the looming authority of the British Empire. It's the equivalent of two teenage twins whose mother won't let them drive until she nearly kills them both in a drunk driving accident. Ooh, I don't know if it's possible to make an analogy that's even more depressing than dead soldiers, but I think I may have just done it.

Australian kids grow up knowing what the acronym Anzac stands for and its significance, but does anyone know how the acronym came to be used or who was responsible for it?

The following commentary thereon comes from the Australian War memorial website at:
http://www.awm.gov.au/encyclopedia/anzac/acronym/origin/

Origins of the acronym ANZAC

It is difficult to say for sure who thought of the acronym. A number of accounts have been written.

One of the first occurrences of the word appeared in a book of sketches by Signaller Ellis Silas and in its foreword by Sir Ian Hamilton. Silas Ellis served with the AIF at ANZAC Cove.

Silas dedicated his book Crusading at ANZAC anno domini 1915, published in 1916 "to the honour and glory of my comrades with whom I spent those first terrible weeks at ANZAC".

In the foreword General Sir Ian Hamilton attributes to himself the coining of the acronym as a convenient piece of telegraphese devised for security purposes. He writes,

As the man who first seeking to save himself the trouble, omitted the five full stops and brazenly coined the word "ANZAC", I am glad to write a line or two in preface to sketches which may help to give currency to that token throughout the realms of glory.

...In the "ANZAC Book",General Birdwood stated that when he took over the command of the Australian and New Zealand Army Corps in Egypt, he was asked to select a telegraphic code address for his Army corps, and adopted the word"ANZAC". Later on after the landing, he was asked by General Headquarters to suggest a name for the beach, and in reply he christened it "ANZAC Cove".

The Australian war historian C.E.W. Bean attributed the acronym to a Lt A.T. White RASC of the British Regular Army.

One day early in 1915 Major C.M. Wagstaff, then a junior member of the "operations" section of Birdwood's staff, walked into the General Staff office and mentioned to the clerks that a convenient word was wanted as a code name for the Corps. The clerks had noticed the big initials on the cases outside their room - A. & N. Z. A. C. and a rubber stamp for registering correspondence had also been cut with the same initials. When Wagstaff mentioned the need of a code word, one of the clerks, (according to most accounts Lieutenant A.T. White) suggested: "How about ANZAC?" Major Wagstaff proposed the word to the general who approved of it, and "ANZAC" thereupon became the code name of the Australian and New Zealand Army Corps. It was however, some time before the code word came into everyday use, and at the Landing at Gallipoli many men in the divisions had not yet heard of it.

Two Australian sergeants, Little and Millington had cut a rubber stamp, with the initials A. & N. Z. A. C. at Corps headquarters, situated in Shepheard's Hotel, Cairo... When a code name was required for the Corps, a British officer, a Lt. White suggested "ANZAC". Little later claimed that he made the original suggestion to White. It was in general use by January, 1915. 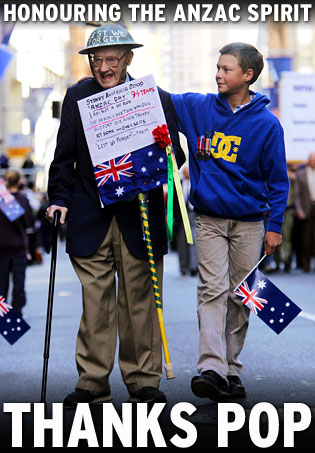