All I Really Need to Know I Learned in Kindergarten

I have previously observed that our age is smarter, better educated, more advanced at younger ages and the most technologically advanced in history. And yet we also seem to have become more alone, isolated from each other, communicating via computers and iPhones. Divorce and separation are easier and more prevalent, military conflicts are more deadly. General Omar Bradley, a WW2 military leader, one of only nine five star generals and first Chairman of the Joint Chiefs of Staff, said in 1948:

"We have men of science, too few men of God. We have grasped the mystery of the atom and rejected the Sermon on the Mount. The world has achieved brilliance without conscience. Ours is a world of nuclear giants and ethical infants. We know more about war than we know about peace, more about killing than we know about living. If we continue to develop our technology without wisdom or prudence, our servant may prove to be our executioner."

One of the sadder characteristics of our age is the increased cynicism of people of all ages. It is uncool to feel sentimental or emotional; to dismiss homespun advice and writing as corny and saccharine. Oscar Wilde commented that

“A cynic is a man who knows the price of everything, and the value of nothing.” 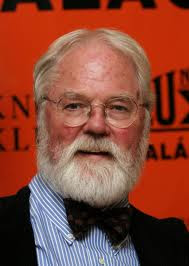 Robert Fulghum (pronounced Full-Jum”) (1937 - ) is an American Unitarian minister and author whose book of essays entitled All I Really Need to Know I Learned in Kindergarten has taken a lot of flak as being trite, saccharine and superficial. His philosophy of seeing the world through the eyes of a child has been similarly pilloried. That doesn’t worry him:

''I don't think there is a hidden purpose to the universe that you have to puzzle out. 'You are free to give life meaning, whatever meaning you want to give it. Most ordinary things can be sources of pleasure if one invests that in it.''

The book contains 50 short essays of 200-1,000 words in length, covering various topics. The essays are mostly the bi-weekly columns he wrote for his church newsletter. He himself admits that the writing isn’t great. It is, however, from the heart and has some good commonsense, so I make no apologies for posting the first essay in the book, the one that gives the book its title:

All I really need to know about how to live and what to do and how to be I learned in kindergarten. Wisdom was not at the top of the graduate school mountain, but there in the sand pile at school.

These are the things I learned:

Put things back where you found them.

Clean up your own mess.

Don't take things that aren't yours.

Say you're sorry when you hurt somebody.

Wash your hands before you eat.

Warm cookies and cold milk are good for you.

Live a balanced life - learn some and think some and draw and paint and sing and dance and play and work every day some.

Take a nap every afternoon.

When you go out in the world, watch out for traffic, hold hands and stick together.

Be aware of wonder. Remember the little seed in the Styrofoam cup: the roots go down and the plant goes up and nobody really knows how or why, but we are all like that.

Goldfish and hamsters and white mice and even the little seed in the Styrofoam cup - they all die. So do we.

And then remember the Dick-and-Jane books and the first word you learned - the biggest word of all - LOOK.

Everything you need to know is in there somewhere. The Golden Rule and love and basic sanitation. Ecology and politics and equality and sane living.

Take any one of those items and extrapolate it into sophisticated adult terms and apply it to your family life or your work or government or your world and it holds true and clear and firm. Think what a better world it would be if we all - the whole world - had cookies and milk at about 3 o'clock in the afternoon and then lay down with our blankies for a nap. Or if all governments had as a basic policy to always put things back where they found them and to clean up their own mess.

And it is still true, no matter how old you are, when you go out in the world, it is best to hold hands and stick together.

Posted by BytesMaster at 2:52 AM