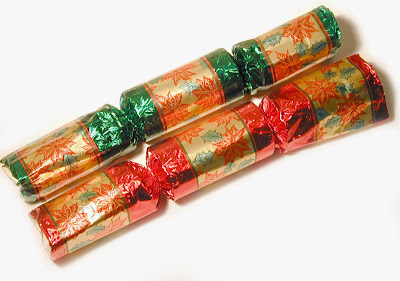 I went to dinner last weekend with some friends.  There were Christmas crackers on the table, you know the type: you and another person pull an end, it pops and someone ends up with the end that contains a paper party hat, a little gift and a joke, a really bad joke. So as each cracker was pulled, the jokes were read out:

What does a fireman say at a church fire?
Holy smoke.

What do you call a fairy who hasn’t washed for a week?
Stinker Bell

When it was my turn I decided to substitute a good joke instead.

Pretending to read from the bit of paper from the cracker, I said “What’s the difference between a wizard’s magic wand and...” at which point my wife said that it did not say that and that I should not finish it. This, of course, prompted a call by one of the persons at the table to finish it, so I read “What’s the difference between a wizard’s magic wand and a policeman’s truncheon?” Prompted to give the answer I said “A wizard’s magic wand is used for cunning stunts.” The other person thought about it and said “I don’t get it.” She was told to think about it and we moved on.

My trying to make a Christmas cracker joke funny prompted son Thomas to volunteer an interesting bit of information, that a Christmas episode of QI had looked at the issue of Christmas cracker jokes being universally bad. In most cases not everyone will find a joke funny. If a good joke is told, it’s likely that the room will be divided in two: those who like the joke and those who either do not like it or do not get it. That may also cause some of those persons to dislike the joke teller. However, if if the joke is bad, then the figure of hatred is the joke itself rather than the person telling it.

The policy that Christmas cracker jokes should be bad is confirmed by Julian Reed, of Robin Reed Hand-Made Crackers: "The whole point is that they are not meant to be that funny - they are groan-inducing. The bigger the groan, the better the joke. Next to political incorrectness, the main reason jokes are rejected is that they're too funny."

At the beginning of December 2013 British TV channel Gold had a Twitter competition to find the 10 best Christmas cracker jokes. A shortlist was prepared and these were then voted on by 2,000 British adults.

The top 10 favourites chosen by the public were:

What does Miley Cyrus have at Christmas?
Twerky.

Why did no-one bid for Rudolph and Blitzen on eBay?
Because they were two deer.

Mary and Joseph – now they had a stable relationship.

What does the Queen call her Christmas Broadcast?
The One Show.
(I believe that The One Show is a BBC programme with topical stories and big name studio guests).

What did Santa do when he went speed dating?
He pulled a cracker.

Why don't you ever see Santa in hospital?
Because he has private elf care.

How did Mary and Joseph know that Jesus was 7lb 6oz when he was born?
They had a weigh in a manger.

Why is it getting harder to buy advent calendars?
Because their days are numbered.

How do you know if Santa's been in your garden shed?
You've got three extra hoes.

Why was the Brussels sprout sent to prison?
Because it was a repeat offender. 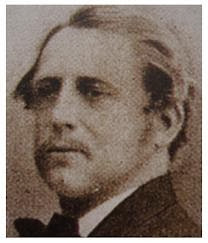 In 1846 one Thomas Smith visited Paris and discovered bon bons, a sugar almond wrapped in tissue paper, twisted at each end. He began selling them in London but although he did well with them at Christmas, for the rest of the year business was slow. To increase sales, he came up with different gimmicks and promotional marketing ideas. The first such idea, in the early 1850’s, was to insert "love messages" into the wrappers of the sweets. Since many of the sweets were bought by men to give to women, this proved successful.

In about 1860 Smith added the "crackle" element when he heard the crackle of a log he had just put on a fire. The size of the paper wrapper had to be increased to incorporate the banger mechanism, and the sweet itself was eventually dropped, to be replaced by a trinket such as fans, jewellery and other substantial items to differentiate them from rivals who were imitating his product. The new product was initially marketed as the Cosaque (i.e., Cossack), but the term "cracker" soon became the commonly used name.

The other elements of the modern cracker —the gifts, paper hats and varied designs— were all introduced by Tom Smith's son, Walter Smith, to differentiate his product from the rival cracker manufacturers which had suddenly sprung up. The paper hat was added in the early 1900’s and the jokes and riddles replaced the love poems in the 1930’s.

As the demand for crackers increased, Tom Smith merged with Caley Crackers in 1953 taking over their headquarters and factory in Norwich, East Anglia. 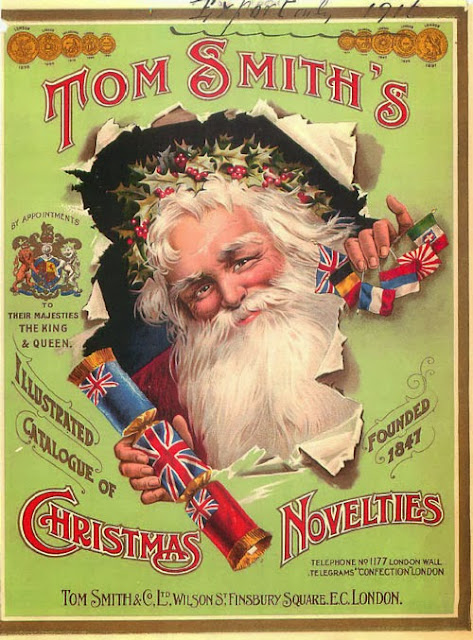 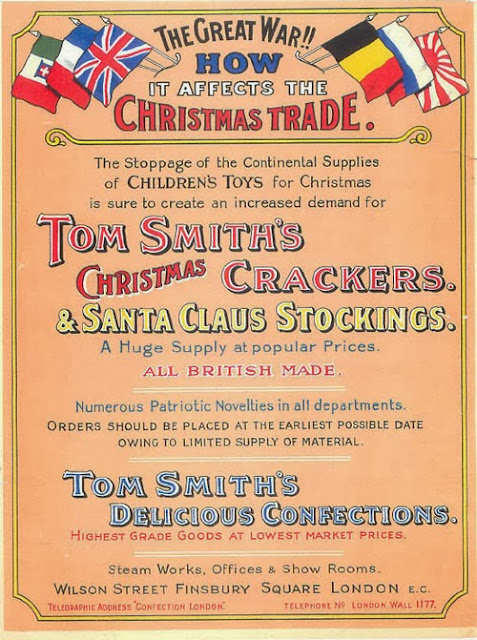 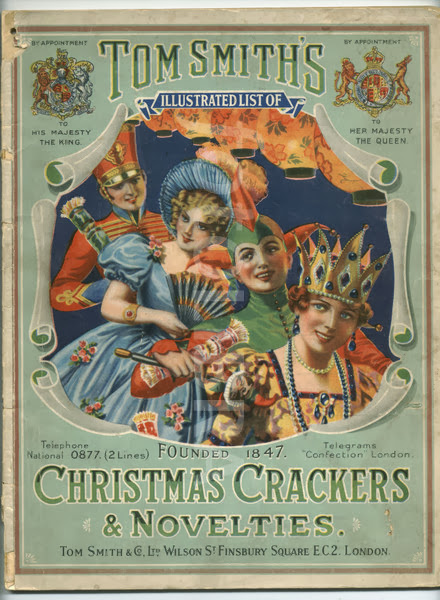 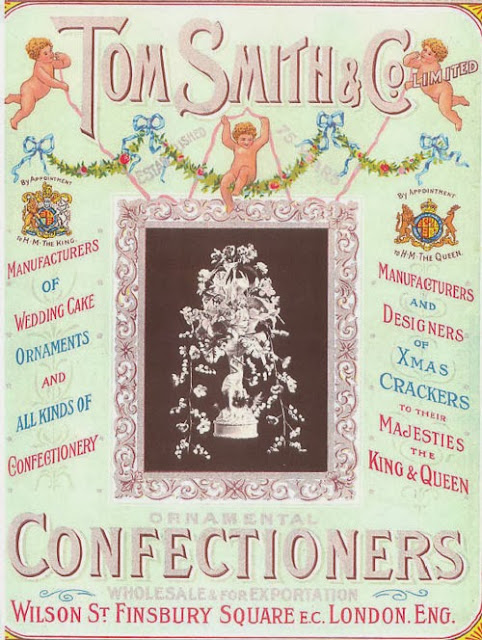 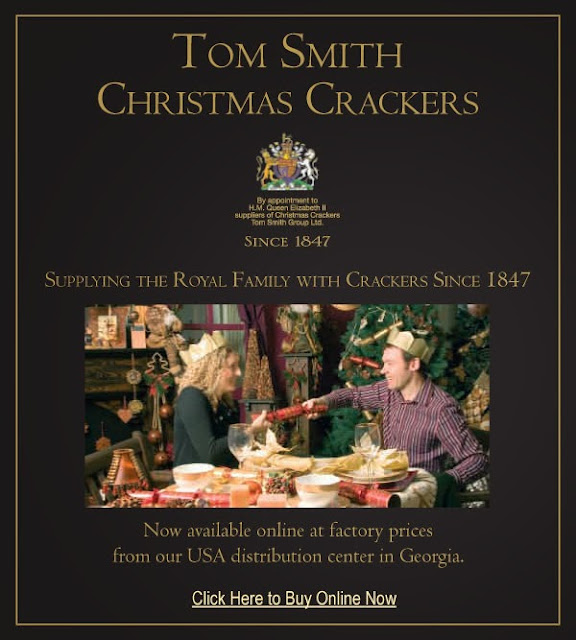 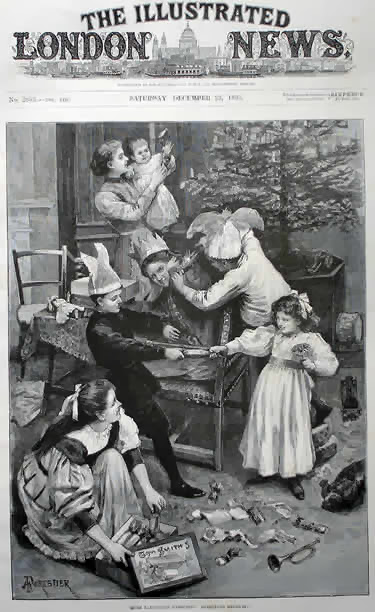 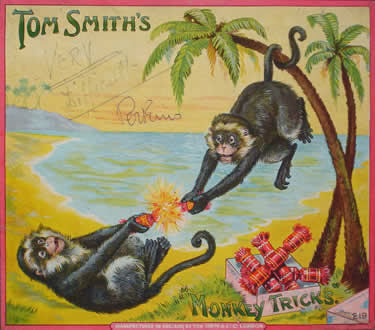 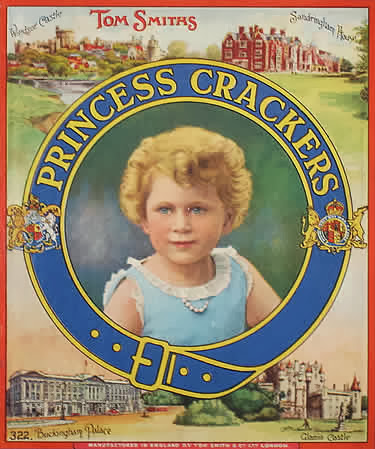 The proper way to pull Christmas crackers is that everyone at the table pulls at once with crossed arms in a circle: 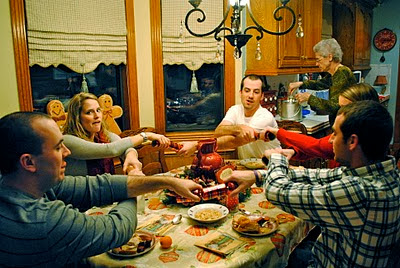 On 10 December 2013 office workers in Birmingham claimed to have broken the Guinness World Record for the longest Christmas cracker chain. 749 people linked together to each pull a cracker at the same time, breaking the previous World Record of 603 which was set in November. 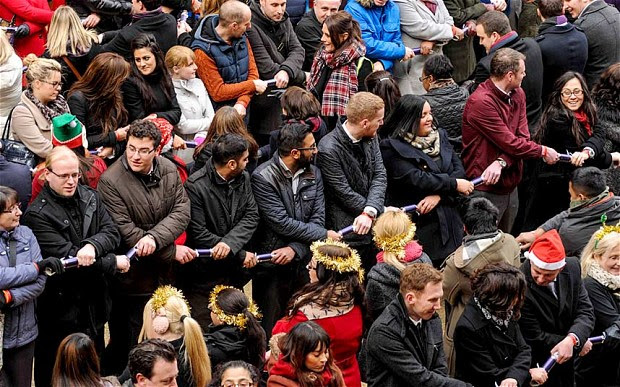 Posted by BytesMaster at 2:32 AM