My thanks to Byter Peter M for sending me the pics below and putting me on to the story.

Overseas readers may not be aware that there has been a controversial issue in Australia since the 1970's of policies relating to "boat people", a term coined by the then Prime Minister Gough Whitlam in lieu of references to "refugees". On the one hand there are humanitarian issues such as compassion for asylum seekers and detention centres (inlcuding those at Nauru and Christmas Island) pending assessment for refugee status. On the other hand there is opinion that boat people are jumping the queue and, in many cases, are simply economic refugees. Both Tony Abbott and Kevin Rudd included "Stop the Boats" policies in their recent election platforms and as recently as October this year the Minister for Immigration issued a departmental memorandum that henceforth asylum seekers were now to be referred to as "illegal arrivals" and as "detainees". This has resulted in counterclaims of dehumanisation.

One young couple, Carolyn and Robert Woodhead, highlighted these issues in their contribution to their street's Christmas lights display in the inner city suburb of Erskineville: Underneath a sign framed by Christmas lights declaring that the location is "Merry Christmas Island" are further signs and placards:

"WE GREW HERE, YOU FLEW HERE"

The Woodhead's front yard is surrounded by strings of lights resembling barbed wire.

According to Mrs Woodhead:

"I don't consider this a protest, I consider it a discussion starter.

Everything's gone a bit crazy, I didn't expect it to go right as far as it has. I didn't want to offend anyone." 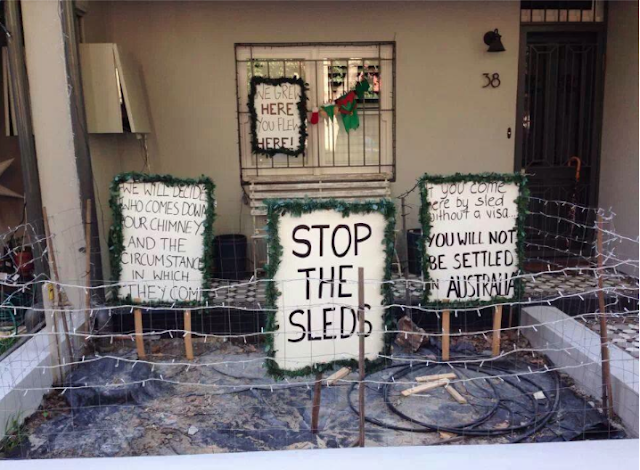 Posted by BytesMaster at 2:47 AM