On June 3 1969 the light aircraft carrier HMAS Melbourne of the Royal Australian Navy (RAN) and the destroyer USS Frank E. Evans of the United States Navy (USN) collided whilst participating in SEATO exercise Sea Spirit in the South China Sea. Around 3:00 am, when ordered to a new escort station, ahead of Melbourne from astern, Evans sailed under Melbourne's bow where she was cut in two. Seventy-four of Evans's crew were killed.

Following the collision, the forward part of Evans sank shortly afterwards while the after part of the ship swung around and was secured to Melbourne's starboard side aft. US Navy personnel from the after section of Evans were taken on board Melbourne, either onto the flight deck or onto the quarterdeck. Then, after a search confirmed that no one remained in this section of Evans, it was let go. The 74 sailors who died, out of a total crew of 272, were all in the forward part which sank. Only one body was recovered.

No RAN personnel died in the collision, though Melbourne sustained extensive bow damage.

A joint RAN–USN board of inquiry was held to establish the events of the collision and the responsibility of those involved. This inquiry found that both ships were at fault for the collision despite admissions by members of the USN, given privately to personnel in other navies, that the incident was entirely the fault of Evans.

Captain Stevenson, in charge of Melbourne, was court martialed, with charges being eventually dropped and a verdict of “Honourably Acquitted" being entered. He elected to retire, after what he was put through, as he no longer wished to serve under people he no longer respected.

USN Commander Albert S. McLemore and Lieutenants Hopson and Ramsey also faced courts-martial for their contributions to the collision. Hopson and Ramsey both pleaded guilty to charges of dereliction of duty and negligence, and had their positions in the promotion list moved down. McLemore, who pleaded not guilty to the charges against him, was found guilty of dereliction of duty and negligently hazarding his ship. The formal reprimand effectively ended his naval career. In 1999, McLemore publicly claimed that the collision was his responsibility, as he had left two inexperienced officers with the con of his ship. 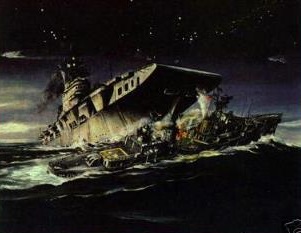 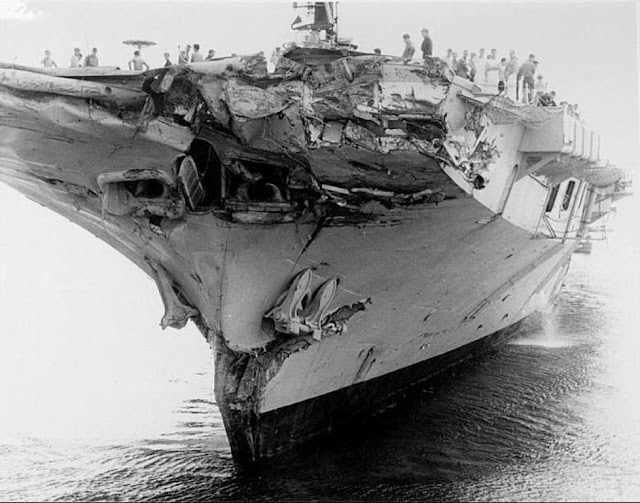 The bow of HMAS Melbourne after her collision with USS Frank E Evans.

HMAS Melbourne had been involved in a similar coliision in 1964.

On the evening of 10 February 1964, the Melbourne and the Australian destroyer HMAS Voyager were performing manoeuvres off Jervis Bay, New South Wales. Melbourne's aircraft were performing flying exercises, and Voyager was tasked as plane guard, positioned behind and to port (left) of the carrier in order to rescue the crew of any ditching or crashing aircraft, the same as the USS Frank E Evans at their collision. After a series of turns effected to reverse the courses of the two ships, Voyager ended up ahead and to starboard of the carrier. The destroyer was ordered to resume plane guard position, which would involve turning to starboard, away from the carrier, then looping around behind. Instead, Voyager began a starboard turn, but then came around to port. The bridge crew on Melbourne assumed that Voyager was zig-zagging to let the carrier overtake her, and would then assume her correct position. Senior personnel on Voyager were not paying attention to the manoeuvre. At 20:55, officers on both ships began desperate avoiding manoeuvres, but by then a collision was inevitable. Melbourne struck Voyager at 20:56, with the carrier's bow striking just behind the bridge and cutting the destroyer in two. Of the 314 aboard Voyager, 82 were killed, most of whom died immediately or were trapped in the heavy bow section, which sank after 10 minutes. The rest of the ship sank after midnight. Melbourne, although damaged, suffered no fatalities, and was able to sail to Sydney the next morning with most of the Voyager survivors aboard – the rest had been taken to the naval base HMAS Creswell.

The four-month Royal Commission, headed by Sir John Spicer,[1] concluded that Voyager was primarily at fault for failing to maintain effective situational awareness, but also criticised Melbourne's captain, John Robertson, and his officers for not alerting the destroyer to the danger they were in. Robertson was posted to a shore base and banned from serving again at sea; he resigned soon after. Opinions were that the Royal Commission had been poorly handled, and Robertson had been made a scapegoat. 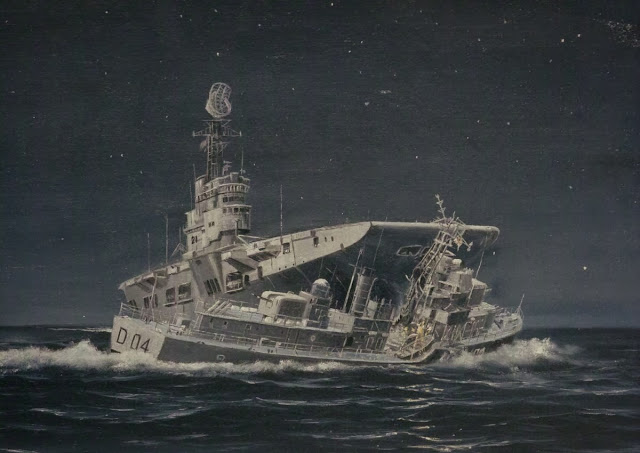 Artist’s depiction of the collision 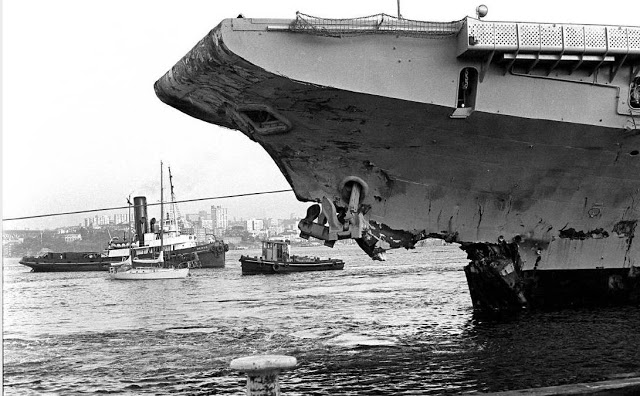 HMAS Melbourne on return to port following the collision.

Posted by BytesMaster at 1:51 AM