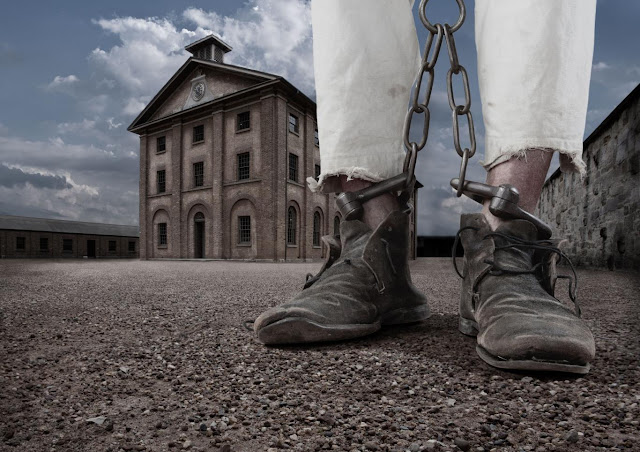 Where now there are international airport runways, container terminals and national parks, there once were convict ships, men in chains and men with guns to guard them.  The First Fleet, which settled Australia in 1788, was a consignment of convicts sent halfway across the world from England to Botany Bay.  Despite the move of convict settlements to Sydney Cove, in England the Australian penal colony continued to be referred to as Botany Bay, also reflected in Songs such as Botany Bay and Bound for Botany Bay.

Between 1788 and 1868, about 162,000 convicts were transported from Britain to various penal colonies in Australia.The British Government began transporting convicts overseas to American colonies in the early 17th century. When transportation ended with the start of the American Revolution, an alternative site was needed to relieve further overcrowding of British prisons and hulks. Earlier in 1770, James Cook charted and claimed possession of the east coast of Australia for Britain. Seeking to pre-empt the French colonial empire from expanding into the region, Britain chose Australia as the site of a penal colony, and in 1787, the First Fleet of eleven convict ships set sail for Botany Bay, arriving on 20 January 1788 to found Sydney, New South Wales, the first European settlement on the continent. Other penal colonies were later established in Van Diemen's Land (Tasmania) in 1803 and Queensland in 1824, while Western Australia, founded in 1829 as a free colony, received convicts from 1850. South Australia and Victoria, established in 1836 and 1850 respectively, remained free colonies. Penal transportation to Australia peaked in the 1830s and dropped off significantly the following decade as protests against the convict system intensified throughout the colonies. In 1868, almost two decades after transportation to the eastern colonies had ceased, the last convict ship arrived in Western Australia.The majority of convicts were transported for petty crimes. More serious crimes, such as rape and murder, became transportable offences in the 1830s, but since they were also punishable by death, comparatively few convicts were transported for such crimes. Approximately 1 in 7 convicts were women, while political prisoners, another minority group, comprise many of the best-known convicts. Once emancipated, most ex-convicts stayed in Australia and joined the free settlers, with some rising to prominent positions in Australian society. However, convictism carried a social stigma, and for some later Australians, the nation's convict origins instilled a sense of shame and cultural cringe. Attitudes became more accepting in the 20th century and it is now considered by many Australians to be a cause for celebration to have a convict in one's lineage. Around 20% of modern Australians, in addition to 2 million Britons, are descended from transported convicts. https://en.wikipedia.org/wiki/Convicts_in_Australia#cite_note-3


Which is all by way of introduction to an anonymous song dating from pre 1830 when bushranger Jack Donahue, who is named in the song, was fatally shot by troopers. (The song is included in the Quentin Tarantino film The Hateful Eight).

Come gather round and listen lads, and hear me tell m' tale,
How across the sea from England I was condemned to sail.
The jury found me guilty, and then says the judge, says he,
“Oh for life, Jim Jones, I'm sending you across the stormy sea.
But take a tip before you ship to join the iron gang,
Don't get too gay in Botany Bay, or else you'll surely hang.
Or else you'll surely hang", he says, says he, “and after that, Jim Jones,
Way up high upon yon gallows tree, the crows will pick your bones.”

Our ship was high upon the seas when pirates came along,
But the soldiers on our convict ship were full five hundred strong;
They opened fire and so they drove that pirate ship away
But I'd rather joined that pirate ship than gone to Botany Bay.
With the storms a-raging round us, and the winds a-blowing gales
I'd rather drowned in misery than gone to New South Wales.
“There's no time for mischief there, remember that,” they say
“Oh they'll flog the poaching out of you down there in Botany Bay.”

Day and night in irons clad we like poor galley slaves
Will toil and toil our lives away to fill dishonoured graves
But by and by I'll slip m' chains and to the bush I'll go
And I'll join the brave bushrangers there, Jack Donahue and Co.
And some dark night all is right and quiet in the town,
I'll get the bastards one and all, I'll gun the floggers down.
I'll give them all a little treat, remember what I say
And they'll yet regret they sent Jim Jones in chains to Botany Bay.

Listen by clicking on the following links: