Macquarie Dictionary Word of the Year 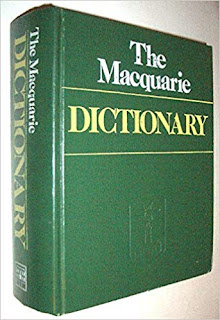 The Macquarie Dictionary is a highly regarded dictionary of English as she is spoke in Australia and New Zealand.

By the way, English As She Is Spoke is the name of a 19th-century book that sought to translate Portuguese into English. 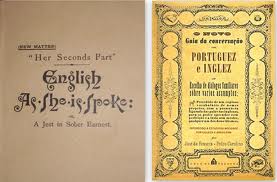 The English translations provided are usually inaccurate or incoherent and it is believed that the author, Pedro Carolino, could not speak English, and that a French–English dictionary was used to translate an earlier Portuguese–French phrase book. Hius literal translations have lost the meanings  and resulted in some real howlers, such as translating the Portuguese phrase chover a cântaros as "raining in jars", when an analogous English idiom is available in the form of "raining buckets".

Anyway, back to the Macquarie Dictionary, which has announced its word of the Year and the list of finalists.  In my view, some are codswallop.

To qualify as Macquarie's word of the year, a word must be newly added to the dictionary in that year or, as is the case with "cleanskin", an old word with an additional new meaning.

Macquarie states that it differs from other dictionaries, as some simply choose the most common word being searched, or most topical word, regardless of its status as "new".  The people at Cambridge Dictionary, which chose "upcycling" for 2019, relied on their Instagram account to make the call.  If the Macquarie committee had done this, its 2019 Word of the Year would have been "cheese slaw" (a salad of grated carrot, grated cheese, and mayonnaise), which it admits would have been a "niche and controversial" choice.

My choice from the MD list as Word of the Year would have been “anecdata”: nformation which is presented as if it were based on systematic research, but is actually based on personal observation or experience.

An example close to home:
“Don’t go over the speed limit on Namatjira Drive, the police are always here.”
“How do you know?”
“Because I got booked here once.”

Also an extract from Portnoy’s Complaint by Alexander Roth, which I have previously quoted (I love this book and his writing style . . . ):

Even in the Chinese restaurant, where the Lord has lifted the ban on pork dishes for the obedient children of Israel, the eating of lobster Cantonese is considered by God (Whose mouthpiece on earth, in matters pertaining to food, is my Morn) to be totally out of the question. Why we can eat pig on Pell Street and not at home is because . . . frankly I still haven't got the whole thing figured out, but at the time I believe it has largely to do with the fact that the elderly man who owns the place, and whom amongst ourselves we call Shmendrick, isn't somebody whose opinion of us we have cause to worry about. Yes, the only people in the world whom it seems to me the Jews are not afraid of are the Chinese. Because, one, the way they speak English makes my father sound like Lord Chesterfield; two, the insides of their heads are just so much fried rice anyway; and three, to them we are not Jews but white-and maybe even Anglo-Saxon. Imagine! No wonder the waiters can't intimidate us. To them we're just some big-nosed variety of WASP! Boy, do we eat! Suddenly even the pig is no threat-though, to be sure, it comes to us so chopped and shredded, and is then set afloat on our plates in such oceans of soy sauce, as to bear no resemblance at all to a pork chop, or a hambone, or, most disgusting of all, a sausage (ucchh! ). .. But why then can't we eat a lobster, too, disguised as something else? Allow my mother a logical explanation. The syllogism, Doctor, as used by Sophie Portnoy. Ready? Why we can't eat lobster. Because it can kill you! Because I ate it once, and I nearly died!

Word of the Year:

Cancel culture:
the attitudes within a community which call for or bring about the withdrawal of support from a public figure, such as cancellation of an acting role, a ban on playing an artist's music, removal from social media, etc., usually in response to an accusation of a socially unacceptable action or comment.

Anecdata:
information which is presented as if it were based on systematic research, but is actually based on personal observation or experience.

Big minutes:
a period of time spent by a player on the field, court, etc., during which they maximise their impact, having a substantial effect on the game: playing big minutes despite a knee injury.

Cheese slaw:
1. coleslaw to which grated cheese has been added.
2. Broken Hill a salad of grated carrot, grated cheese, and mayonnaise.

Drought lot:
a type of sacrifice paddock in which livestock are kept with provisions of water and feed, the confinement allowing the stock to maintain their condition while pasture paddocks can recover more quickly and erosion damage can be minimised in periods of drought.

Eco-anxiety:
feelings of distress and fear brought on by the effects of climate change.

Flight shaming:
criticism or ridicule directed at someone for travelling on an aeroplane because of the carbon emissions and consequent environmental damage produced by such travel.

Healthwashing:
the marketing practice of presenting a food brand or product as being more nutritious or wholesome than it actually is, usually by ignoring or understating the less healthy aspects of the product.

Mukbang:
a broadcast streamed online in which someone films themselves eating, often a large amount, and speaking to their audience.

Silkpunk:
a subgenre of science fiction which draws on Asian history and culture for setting and aesthetic.

Whataboutism:
a technique used in responding to an accusation, criticism or difficult question, in which an opposing accusation or criticism is raised.

Posted by BytesMaster at 7:09 AM