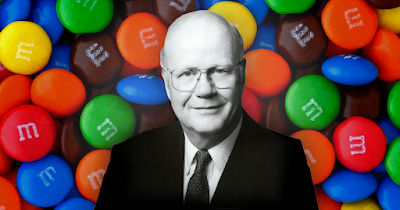 Forrest Mars Snr (1904 – 1999) created Milky Way (1923), Mars Bars (1932) and M&M's (1941). He copied the idea of M & M’s in the 1930’s from the similar British confectionery, Smarties. The other M in the name is for Bruce Murrie, son of Hershey Chocolate's president William F. R. Murrie, who had a 20 percent share in the product for allowing the use Hershey chocolate, Hershey having control of the rationed chocolate at the time.

During the Cold War, the U.S. considered airdropping enormous condoms labeled "Medium" on the Soviets. 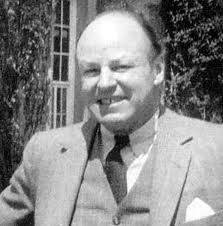 After World War II, Wisner helped found the Office of Policy Coordination which ostensibly assisted refugees and worked with the International Red Cross but which secretly was involved with covert actions against the Soviet Union. Using early psychological warfare, proposals forward included delivering American toiletries across the Iron Curtain (to demonstrate superior Western standards of comfort) and airdropping enormous condoms labeled “Medium” onto the Soviets, to demoralize them against an anatomically superior American army. The latter was not implemented but is it any crazier than OSS plans in WW2 to secretly add oestrogen to Hitler’s food to make him more female, cause him to develop breasts, make his voice rise and make his hair fall out. Or any crazier than the Russians thinking that they could hack another country’s computers and leak information about a Presidential candidate to influence an election? No, wait, that one did happen.
______________

Speaking of oestrogen and developing breasts, you may have seen the Netflix series The Bletchley Circle or the film The Imitation Game. Both are about the British (and later, Allied) code cracking installation at Bletchley Park and both tell the story of how the codebreakers there cracked the German Enigma and Lorenz ciphers. According to the official historian of British Intelligence, the "Ultra" intelligence produced at Bletchley shortened the war by two to four years, and that without it the outcome of the war would have been uncertain. 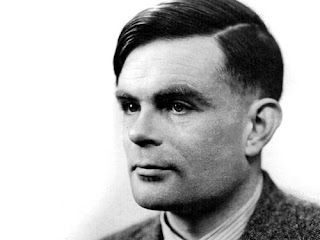 Alan Turing was one of the leaders at Bletchley Park, where he devised a number of techniques for speeding the breaking of German ciphers, improved various codebreaking methods and devised an electromechanical machine that could find settings for the Enigma machine. Turing played a pivotal role in cracking intercepted coded messages that enabled the Allies to defeat the Nazis in many crucial engagements, including the Battle of the Atlantic, and in so doing helped win the war. After the war Turing worked in developing computers, earning him the title of Father of Modern Computer Science.

Sadly, the problem for Turing is that he was gay at a time when such activity was legally defined and “gross indecency” and was a criminal offence in the UK. In 1952 when the police were investigating a burglary at Turing’s home, he admitted to being in a sexual relationship with another man, one Arnold Murray. He, then aged 39, and Murray, 19, were charged with criminal offences, he pleaded guilty and was given a choice: imprisonment or probation, conditional upon accepting chemical castration. Opting for the latter, he was given doses of oestrogen by injection which caused him to become impotent and develop breasts. As a consequence of the convictions his security clearance was revoked, he was no longer able to work in government areas and he was prevented from entering the US.

In 1954 his housekeeper found him dead. Death was established to be from cyanide poisoning and a finding of suicide was entered, it being assumed that a half eaten apple was the means of administration. Others have questioned this, arguing that a more likely cause was accidental inhalation of cyanide fumes from an electroplating device Turing used in his flat.

Fast forward to 2009, to a speech by Prime Minister Gordon Brown:

Thousands of people have come together to demand justice for Alan Turing and recognition of the appalling way he was treated. While Turing was dealt with under the law of the time and we can't put the clock back, his treatment was of course utterly unfair and I am pleased to have the chance to say how deeply sorry I and we all are for what happened to him ... So on behalf of the British government, and all those who live freely thanks to Alan's work I am very proud to say: we're sorry, you deserved so much better.

By the way, Murray had received a conditional discharge. 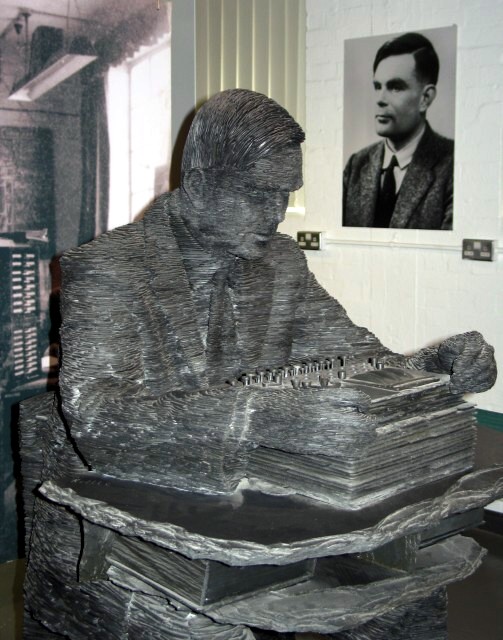 The statue, commissioned from Stephen Kettle by the late Sidney E Frank, depicts Alan Turing seated in front of an ENIGMA ciphering machine. Turing was the inspirational mathematician at the heart of Bletchley Park’s success in breaking into Enigma-enciphered wireless traffic during World War Two. The one and a half ton, life-size statue was created from approximately half a million individual pieces of Welsh slate. 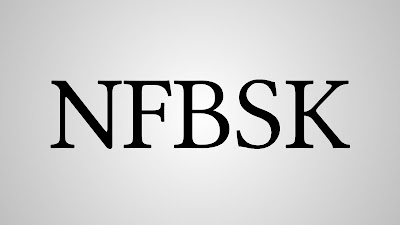 The abbreviation NFBSK, should you see it used, stands for Not For British School Kids. At the snopes.com message board, an irate woman posted saying the other posters should watch their language, because there were British school children reading the message board. From then on, as a joke, the other posters started using NFBSK in place of swear words or in the subject lines of topics that might not be suitable for children. “I moved one Jenga block and the whole NFBSKing thing fell down!”
______________ 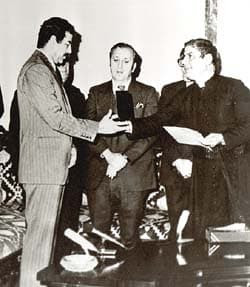 In 1980, Detroit presented the key to the city to Saddam Hussein. Iraqi President at that time, he was awarded the key to the city by Mayor Coleman Young, for having donated hundreds of thousands of dollars to a local church. Hussein had donated to all Chaldean Catholic churches world wide. It is believed that the US government encouraged the gift of the key under the principle “The enemy of my enemy is my friend.” Hussein’s Iraq was engaged in a war against Iran, the US having its own problems with Iran. It therefore backed Hussein.

Posted by BytesMaster at 7:24 AM