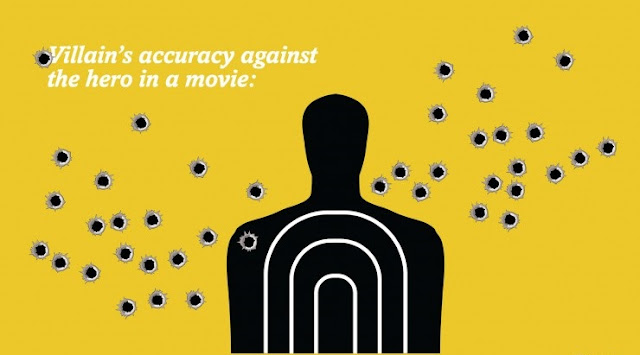 1. If staying in a haunted house, women should investigate any strange noises wearing their most revealing underwear.

2. If being chased through town, you can usually take cover in a passing St Patrick's Day parade - at any time of the year.

3. All beds have special L-shaped top sheets that reach up to armpit level on a woman but only waist level on the man lying beside her.

4. All grocery shopping bags contain at least one stick of French bread.

5. It's easy for anyone to land a plane, providing there is someone in the control tower to talk you down.

6. Once applied, lipstick will never rub off - even while scuba diving.

7. The ventilation system of any building is a perfect hiding place. No one will ever think of looking for you in there and you can travel to any other part of the building without difficulty.

8. You're likely to survive any battle in any war unless you make the mistake of showing someone a picture of your sweetheart back home.

9. Should you wish to pass yourself off as a German officer, it will not be necessary to speak the language. A German accent will do.

10. The Eiffel Tower can be seen from any window of any building in Paris.

12. A man will show no pain while taking the most ferocious beating but will wince when a woman tries to clean his wounds.

13. The Chief of Police is always wrong.

14. When paying for a taxi, never look at your wallet as you take out a note - just grab one at random and hand it over. It will always be the exact fare.

16. Kitchens don't have light switches. When entering a kitchen at night, you should open the fridge door and use that light instead.

17. During all police investigations, it will be necessary to visit a strip club at least once.

18. Mothers routinely cook eggs, bacon and waffles for their family every morning, even though the husband and children never have time to eat them.

19. Cars and trucks that crash will almost always burst into flames.

20. Wearing a vest or stripping to the waist can make a man invulnerable to bullets.

21. A single match will be sufficient to light up a room the size of a football stadium.

22. If a killer is lurking in your house, it's easy to find him. Just relax and run a bath - even if it's the middle of the afternoon.

24. Although in the 20th century it is possible to fire weapons at an object out of visual range, people of the 23rd century will have lost this technology.

26. Any person waking from a nightmare will sit bolt upright and pant.

27. Even when driving down a perfectly straight road, it is necessary to turn the steering wheel vigorously from left to right every few moments.

28. One man shooting at 20 men has a better chance of killing them all than 20 men firing at one.

29. Creepy music coming from a graveyard should always be closely investigated.

30. If a phone line is broken, communication can be restored by frantically beating the cradle and saying, "Hello? Hello?"

31. Most people keep a scrapbook of newspaper clippings - especially if any of their family or friends has died in a strange boating accident.

32. It does not matter if you are heavily outnumbered in a fight involving martial arts - your enemies will wait patiently to attack you one by one by dancing around in a threatening manner until you have knocked out their predecessor.

33. During a very emotional confrontation, instead of facing the person you are speaking to, it is customary to stand behind them and talk to their back.

34. When you turn out the light to go to bed, everything in your room will still be clearly visible, just slightly bluish.

35. Dogs always know who's bad and will naturally bark at them.

36. Police departments give their officers personality tests to make sure they are deliberately assigned a partner who is their total opposite.

37. When they are alone, all foreigners prefer to speak English to each other.

39. No matter how badly a spaceship is attacked, its internal gravity system is never damaged.

40. If there is a deranged killer on the loose, this will coincide with a thunderstorm that has brought down all the power and phone lines in the vicinity.

41. You can always find a chainsaw whenever you're likely to need one.

43. Having a job of any kind will make all fathers forget their son's eighth birthday.

44. Many musical instruments - especially wind instruments and accordions - can be played without moving the fingers.

45. All bombs are fitted with electronic timing devices with large red readouts so you know exactly when they're going to go off.

46. It is always possible to park directly outside the building you are visiting.

47. Guns are like disposable razors - if you run out of bullets, just throw the gun away. You can always find a new one.

48. Make-up can safely be worn to bed without smudging.

49. A detective can only solve a case once he has been suspended from duty.

50. If you decide to start dancing in the street, everyone you bump into will know all the steps.

Posted by BytesMaster at 8:13 PM