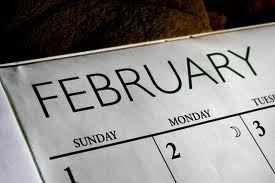 Some facts and trivia about February . . .
February was added to the Roman calendar in 713 BC. The length of the month changed over time and, at one time, it had as few as 23 days. When Julius Caesar remade the Roman calendar, the month was assigned 28 days during normal years and 29 days during leap years which occurred every four years.
The month is named for the Latin word februum which means purification. Together with January, it was the last of the months added to the Roman calendar.
The Saxon term for the month, Sol-monath, means "cake month". This is because they offered cakes to the gods during this month.
About 400 years ago, Shakespearean times, this month was known as ‘Feverell’. In Newton’s time, 300 years ago, it had changed to ‘Frbrueer’, which is where February has its latest derivation.
It is the shortest month of the year, the Welsh calling February "y mis bach" which means "little month".
It is the third month of winter in the Northern hemisphere. In the Southern Hemisphere February is a summer month the equivalent of August.
February 2 is Groundhog Day, which even people in Kazahkstan would know the meaning of as a result of the 1993 Bill Murray movie. Love that movie. For those who have been marooned on a desert island or in a coma, it is the day when people look to the groundhog to predict the weather for the next six weeks. Folklore says that if the sun is shining when the groundhog comes out of his burrow, then the groundhog will go back into its burrow and we will have winter for six more weeks. However, if it is cloudy, then spring will come early that year. 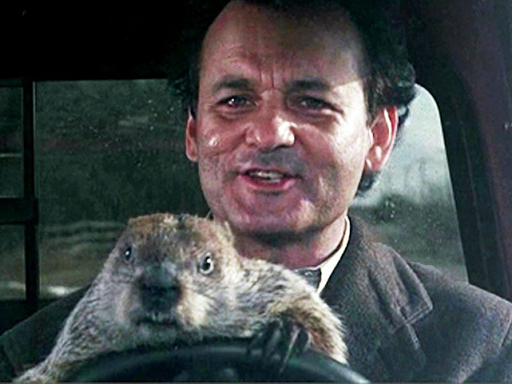 "This is pitiful. A thousand people freezing their butts off waiting to worship a rat. What a hype. Groundhog Day used to mean something in this town. They used to pull the hog out, and they used to eat it. You're hypocrites, all of you!"
- Phil Connors, Groundhog Day
By the way:
The origins of Groundhog Day can be traced to German settlers in Pennsylvania who celebrated February 2nd as Candlemas Day. On this day if the sun came out then there would be six more weeks of wintry weather. At some point people began to look to the groundhog to make this prediction. The earliest reference to the groundhog is in an 1841 journal entry. In 1886 the Punxsutawney newspaper declared February 2nd as Groundhog Day and named the local groundhog as Punxsutawney Phil. Since then the day and tradition has spread throughout the United States.
The largest American sporting event of the year, the Super Bowl, is held in February.
Symbols of February:
Birthstone: Amethyst
Flower: Primrose
Zodiac signs: Aquarius and Pisces
Chinese New Year celebrations start on February 12 this year and continue to February 21. A popular greeting on this day is Kung Hei Fat Choy. It means "We hope you get rich" but I think they stole it from the Vulcan “Live Long and Prosper.”

February 1 is National Freedom Day in the US. This day celebrates the signing of the 13th amendment to the United States Constitution by Abraham Lincoln, the amendment outlawing slavery. The purpose of the holiday is to promote harmony and equal opportunity among all citizens of the United States, something much needed in the current political divide.
February 14 is Valentine’s Day, when people show their love and affection for others, openly or anonymously. 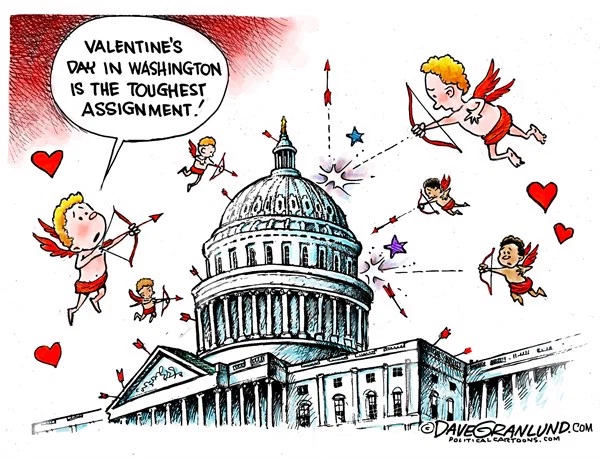 The next day, February 15, is the date of this year’s President’s Day in the US. It takes place on the third Monday in February and, although most commonly called President's Day, the federal holiday is officially called Washington's Birthday. The day honours all of the previous presidents of the United States.
At the risk of pissing off the Trump fans, I love this video:
https://www.youtube.com/watch?v=DZqu8ojifhU
Not long after, February 17, is Ash Wednesday, a Christian holy day that begins the season of Lent, which is 40 days, not counting Sundays, of fasting and repentance prior to the celebration of Easter. Ash Wednesday occurs 46 days before Easter. Since Easter moves around on the calendar, so does Ash Wednesday. In many places, Christians historically abstained from food for a whole day until the evening, and at sunset. Menstruating women are not allowed to take part in the fasting. No, wait, that’s Ramadan.
February has been Black History Month for over 40 years.
The odds of being born on February 29th are about 1 in 1,461. Those born on a leap day can be called a “leaper” or “leapling.” Leapers celebrate their birthdays on February 28 or March 1.
One for the Chocolate Queen Rosie:
This entire month of February has been dedicated to chocolate! The month is celebrated as the National Chocolate Lovers Month. Rosie, how does that reconcile with Lent?

Brett's Monthly:
As usual, Brett B has sent a list of special and bizarre holidays and celebration days for the coming month.  Thanks Brett.
Click on the daily ones to expand . . .

The Day the Music Died - Buddy Holly, Richie Valens and the Big Bopper died in a plane crash in 1959.

National Shower with a Friend Day

Wave All you Fingers at Your Neighbor Day

Clean out Your Computer Day - second Monday of Month

Kite Flying Day - in the middle of winter!?!

Get a Different Name Day

Candlemas - on the Julian Calendar

Do a Grouch a Favor Day

No Brainer Day - this day is for me!