Continuing a display of photographs showing some of what is happening in the Ukraine, from Bored Panda at:
https://www.boredpanda.com/heartbreaking-moments-ukraine-russia-war-part-2/?utm_source=newsletter&utm_medium=email&utm_campaign=Newsletter
Also shown, selected reader comments. 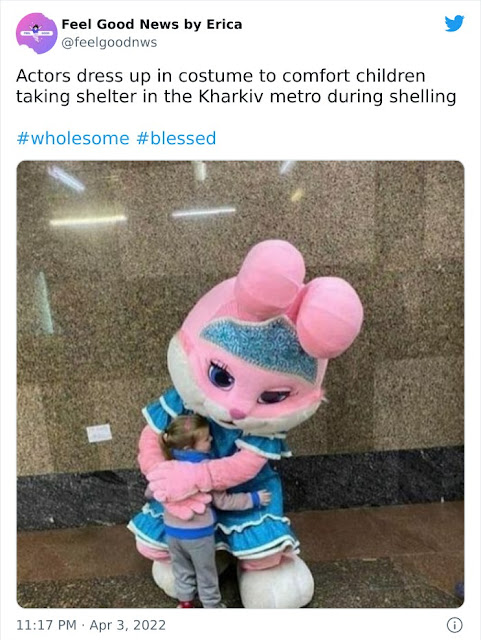 Reader comments:
Precious and so very sad
At least everyone there is doing g what they can. These people are definitely very strong, and comfort is also very important in structure of strongeness. These actors are opening door, these kids are going through very traumatizing times. These actors are helping minimize the trauma. Think of it. When this war ends the children are going to grow up, rebuild, and grow back the land. Trauma is going to slow down, but with thaes wonderful actors soothing these children they are reducing the trauma.
Person who made the above comment:
Sorry for the bad grammar. (I am crying and it makes it hard to see the tiny letters).
Sad beyond words.. God bless the children.
__________ 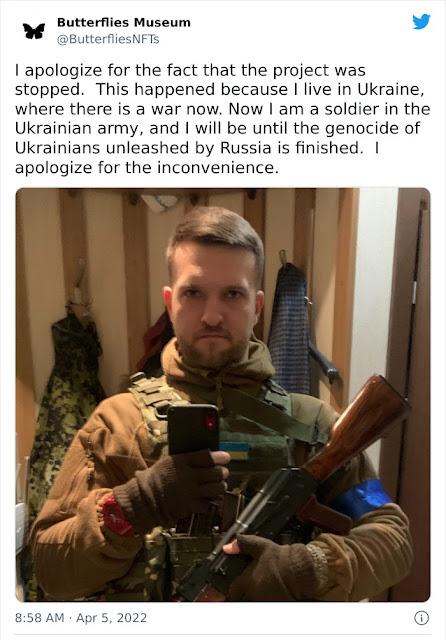 Reader Comments:
Your survival isn't an inconvenience.
DO NOT apologize to anyone for either your life or your country, sir. You are neither an inconvenience or inconsequential. Glory to Ukraine!
Have a look at this man's Twitter page (linked under the picture, ButterfliesNFTs, or Butterflies Museum). He's been posting NFT (digital) butterflies since November. From his page: "I think nature is beautiful, and it’s better that people collect digital butterflies than people kill them for collectibles." Nothing but digital butterflies on his feed and it all stops with this post five days ago. If there's a God in heaven, please keep this butterfly lover safe. Peace for Ukraine!
If a butterfly enthusiast is inconvenienced by this man having to go fight in a war led by a madman where NOTHING is off limits and NO ONE is safe, then they need to go see a surgeon ASAP. It is very dangerous to have one's head that far up one's own butt.
The butterflies await your safe return.
No apologies necessary ! God be with you !
__________ 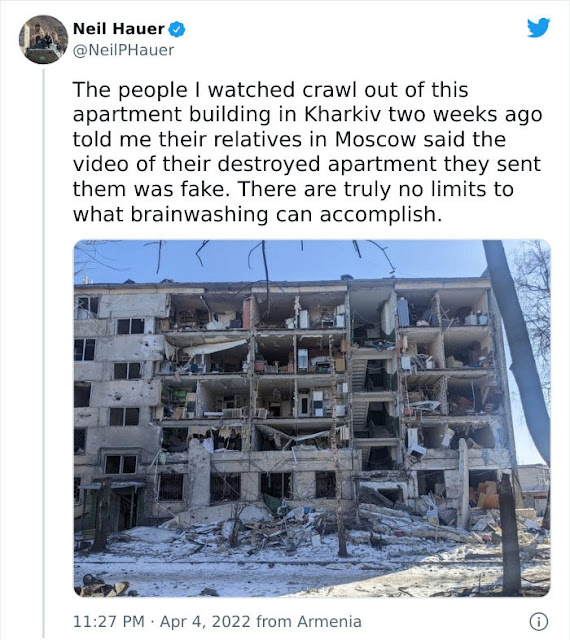 Reader Comments:
Not only Russians. I live in Czechia, and my acquaintance believes that this is all fake and she's on Putin's side. There's over 100 people from Ukraine in our town.. But she believes there's no war. When she said it, I thought it was very bad joke, but no, she meant it.
We have a similar problem here with a former president
I have Russian friends and they feel helpless. Their parents (we're in our 20s-30s, the parents 50s-70s) are brainwashed by the news and refuse to believe even live video calls from family there. My friends are all so upset and some have even got in trouble for being vocal to end the war. I'm in Canada and my Russian expat dentist has even passed around an email that all teeth cleaning money will go to a dental supplies container for those who need emergency mouth surgeries in Ukraine
If you tell a lie big enough and keep repeating it, people will eventually come to believe it.
I always assumed that Russian govt actually blocked things on social media and the internet, like a Russian couldn't read something written by someone in America. I never thought about the logistics of that until I heard an expert (whose name I don't remember) say, "Russians who want the truth have access to the truth." And that it's only the state tv that's really censored like that. That makes me so sad to know that Russian citizens are mostly choosing to turn a blind eye to their own families' horror.
You can blame Putin on that! People in Russia have been cut off from global media,!
There is no end to not wanting to believe or hear the truth because then you would have to do something.
How can you see image after image, video after video, report after report, burned bodies, execution style murders, blown apart buildings, guns, tanks, soldiers and so much more, one right after the other, how can you see a different one EVERY DAMN DAY and still believe it's all LIES?! At what point do you have to actually question and think, "this is still going on, I wonder...." how can you be this brainwashed?!
This also happened in post WW2. People were forced to walk though the death camps.
__________
When The Fighting In Bucha Near Kyiv Intensified, The Russians Went Berserk. The Occupiers Began Killing People En Masse, Shooting And Throwing Grenades At Them. Nikolai Was Given 20 Minutes To Piece Together His Friend And Bury Him 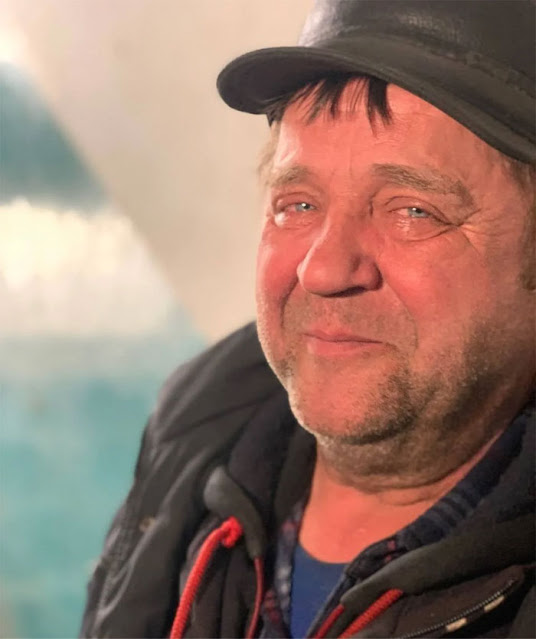 Reader comments:
Putin MUST be made accountable for his horrific war crimes.
Who will ever recover from an ordeal like this...words fail me..
Tears of heartache not hope
Piece together his friend to bury? How brutal is this
I'm so sorry for your loss. Know that your friend appreciated everything you did for him and he would not have wanted you to risk your life further.
__________ 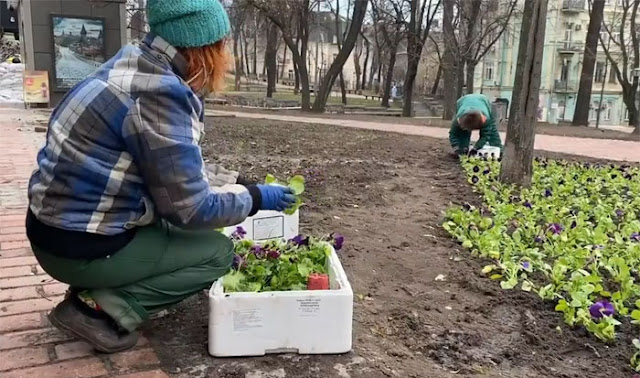 Reader comments:
People do the strangest things during adversity...her way to cope with it all...
This lady is planting hope. Heavenly beauty in defiance of unspeakable ugliness.
Hope Springs Eternal
Anything to take their minds off the horror
I admire and applaud her hope
__________ 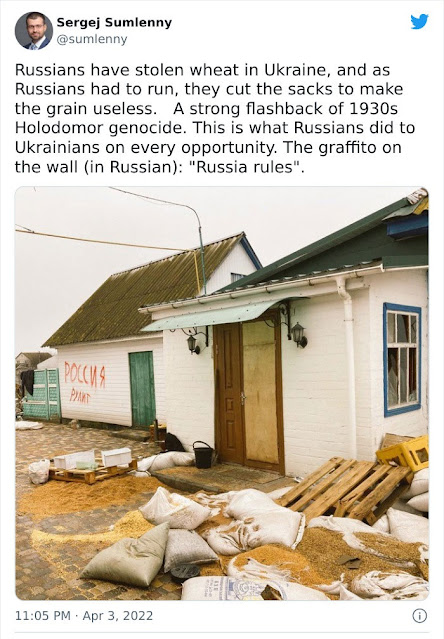 Reader comments:
The Russians are using The Scorched Earth strategy....They have before...when Napoleon invaded Russia but that was to defend themselves....now it is used as pure evil against their brothers...
Ukrainian are not brothers of russians. Russia stolen ukrainian history, culture, name of country ( Rus' is the old name of ukrainian territory). Also they try to destroy Ukraine more than 300 years. So we are NOT brothers. This this fake like all than Russia says.
But "the soldiers don't know what they're doing and are just following orders". F**k off.
I think we are trying to give them the benefit of the doubt, but I don't think all of them knew what they were doing, at least in the beginning.
Barbaric.
This happened in the Armenian Genocide as well. Except it was all food then, not just grain. My great grandpa was alive then, and Ottoman soldiers smeared literal s**t in all of their food. Hopefully it doesn't go any further in Ukraine.
It was done during WW2 on my great grandparent's farm. The mighty Allied soldiers waited until all crops have been gathered and then took everything. Whatever animal couldn't be taken, was shot. My family had to watch, lined up in front of their house, in complete silence under the threat of being executed on the spot. My great grandmother hid the duvets in the chimney to ensure they have something to keep themselves warm with as winter was approaching.
__________ 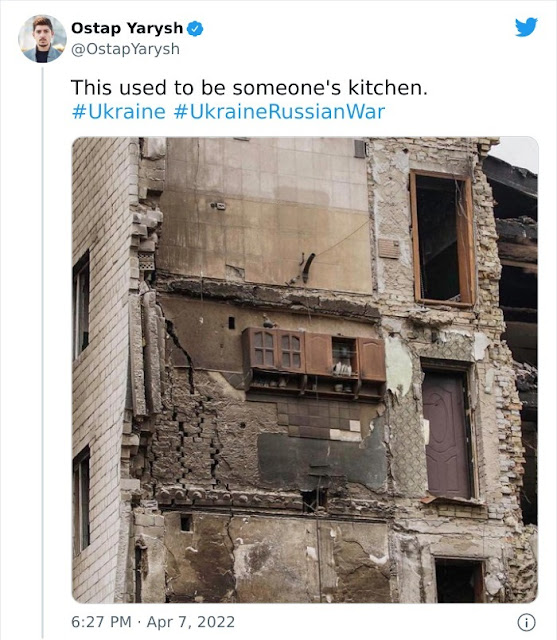 Reader comments:
Kitchens are the heart of a house...a place where you cook, of cause, but somehow it is also the place you gravitate to, and it will fill up with friends and family and where you will talk to grandma, confide in your mother or catch your kids stealing cookies when they were supposed to be asleep...All in another World...I hope the owners are alive and well...kitchens can be rebuilt..
The ceramic cockerel on top of the cabinet was designed by a famous Ukrainian artist. It is now a symbol of survival in Ukraine. The President and the UK PM were both given one yesterday by a resident.
Those plates are just as strong as ukraine.
I hope the occupants are safe.
I am shocked that those cabinets are still there, strange looking photo.
__________ 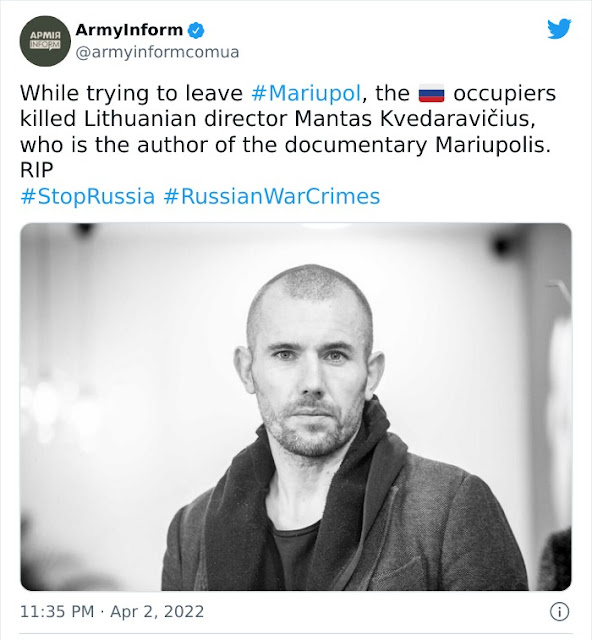 Reader comments:
Although heartbreaking Mantas left behind something lasting and will not be forgotten
Rest in Peace Mantas! Your name will be remembered.
Of coarse he had to die he knew the truth, stood up for it and paid the price with his life . Evil cannot let men like Mantas live.
You poor fella, what did you do so horrible to have your life cut so short!
__________ 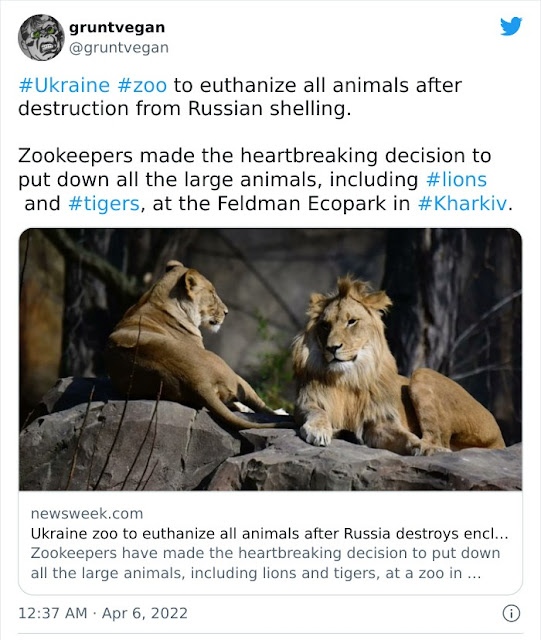 Reader comments:
This is very depressing. I would have never thought of this as yet another horrible result of war.
Way back when the Iraqian troops invaded Kuwait the animals in the zoo died of hunger...
They have not been euthanized at the end. After this news had been announced on TV volunteers came and rescued them. Part of animals are in Kyiv zoo now, part - headed to Western Ukraine
UPDATE: Not sure about other animals, but the lions appear to have been evacuated, yeah! After this story came out, the zoo sent out a plea for financial help. Humanity came through. "A large number of Kharkiv, Kiev, Odessa, Dnipro residents, representatives of many other cities and countries offered their help – it is simply impossible to list them all." From here, includes brief video of lions in cages at the top of the page, scroll down for the story:
https://uk.news.yahoo.com/lions-evacuated-kharkiv-zoo-191220207.html
Thank you for sharing this. I saw a clip of a van that was loaded with wallabies, and other small animals from a zoo, that had been saved. Animals are a casualty of war, just like people.
What what what no, this can't be. (I know it is true, I just mean I feel distressed about it.) I just heard on the most recent episode of This American Life about zookeepers staying in Ukraine to care for their animals. They took turns sleeping next to the elephant to comfort him when he'd get scared during the shellings.
The zoo is on Facebook and you can follow updates. No corridor, animals like mandrakes dying from heart attacks, large stock running into fences and doing grave injury. He’s getting more out. But russia is just petty and vile shelling a zoo
I saw one absolutely horrific picture of an animal who survived a shelling but had the worst burns I've ever seen. I hate to say it but maybe in some instances they'd be better off euthanized. If it was between that and unimaginable suffering.
__________ 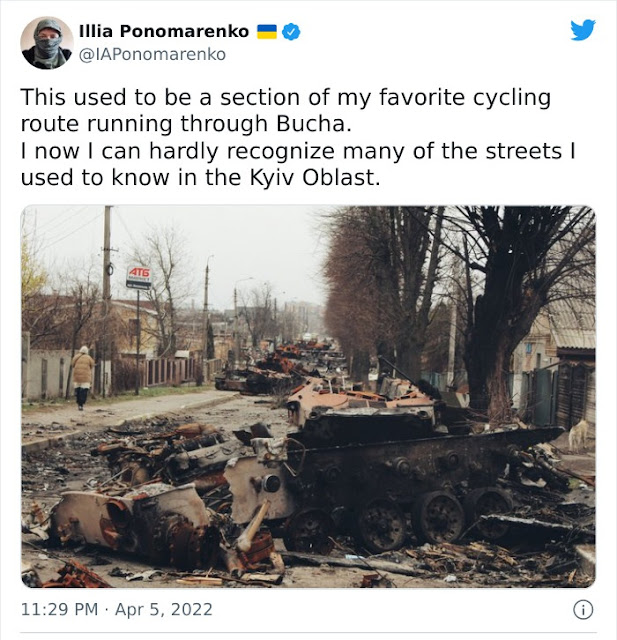 Reader comments:
Just keep telling yourself that things WILL get back to normal...
Better to know you can never go back, only move forward.
Man, I am so lucky my great grandparents left Kyiv/Lviv back in the early 1900s. So much heartache avoided personally, but knowing family and people are suffering so badly hurts my heart.
So sorry, some words are just not enough .
__________ 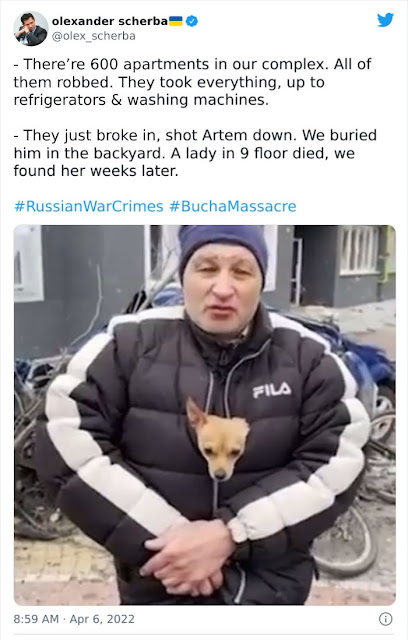 Reader comments:
I can find no words to express my horror !!
Russians the same did in Poland, they robbed killed or raped whole villages after II WW... They called themselves "saviours" but they were worst than nazis. They left villages with diseases and everything was taken, even railways tracks. We used to call them "red plague". They were like the worst type of people. None of grandmothers ever talked about, they just had tears in eyes.
I suppose that, at least while the pigs are thieving, they aren't out killing.
I'm sure they can multitask that way
Has insanity become the rule of the Russian army! Have they opened the doors to an asylum and let them run free. ?
__________ 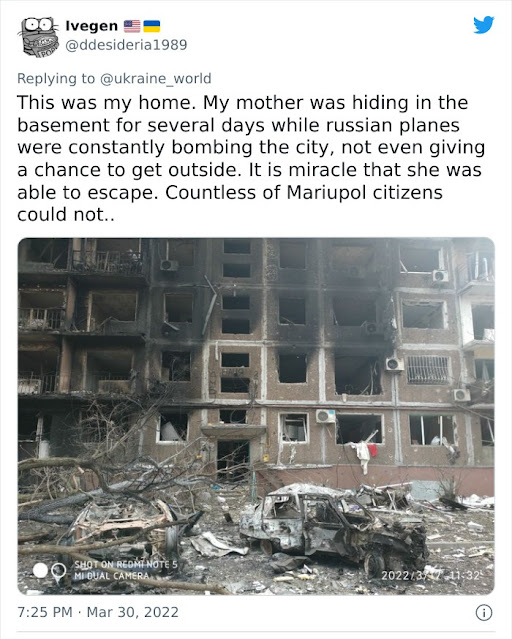 Reader comments:
So happy your mother survived and escaped...
Same! I wish everyone could end this without any more deaths. But unfortunately that most likely won't happen.
My mom is still there, somewhere in Mariupol
Awful what can one say.?
__________ 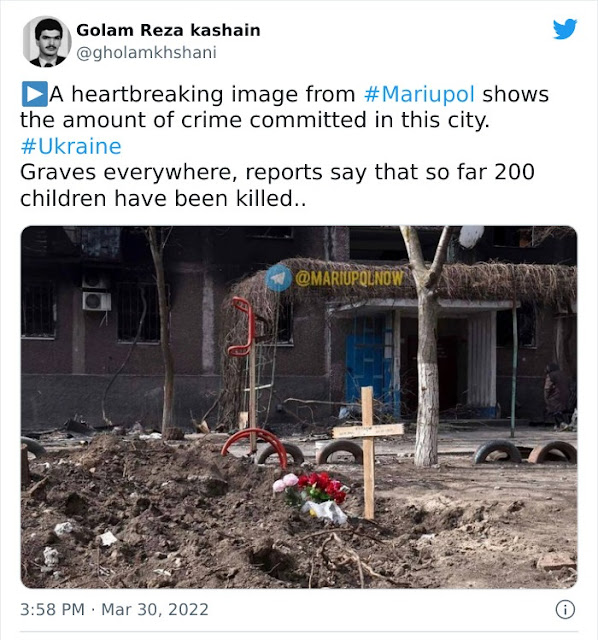 Reader comments:
this is sickening and so very sad.
just no. absolutely f*****g not. F**k putin.
The price of a War that should not have happened. One man's ego Putin should be out down. Unfortunately it does seem that the good die young.
A grave dug where the person fell dead. how insensitive is that? But they have no choice
This is genocide. War crimes. Reprehensible.
200 children? Putin must be punished. This is like the holocaust! History repeats itself...