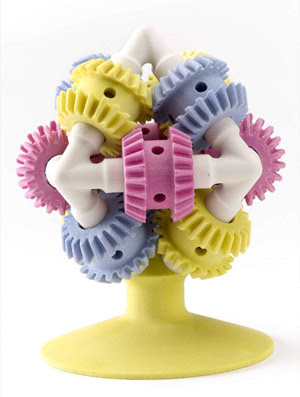 Remember those scenes in cartoons and in sci fi movies where some scientist makes perfect copies of things with a machine?  It was a bit like making copies of documents using a photocopier, only with three dimensional objects, even people.  Well, three dimensional copying is now a reality, although it is not yet possible to invest the objects with life.
The following links show the process and the results, be amazed:
http://www.youtube.com/watch?v=jQ-aWFYT_SU&feature=related
http://www.youtube.com/watch?v=jlq5R84TlVw&feature=related
http://www.youtube.com/watch?v=i6Px6RSL9Ac&feature=related
Some comments:
·         The process is known as 3D printing.  Standard and high-res 3D printers produce intricate plastic models from 3D designs, with the moving parts visible on the surface moving similarly on the copy.  It therefore produce working mechanical devices with moving parts.  It obviously cannot produce internal components.  It will therefore produce a copy of a toy car with the wheels moving, for example, but cannot include the engine under the bonnet.
·         It is especially useful for architecture, product design, jewellery, medical/dental planning, film and video games.
·         At the moment there are commercial 3D printers available for purchase, as well as printers who carry out 3D printing.  An internet search will show examples of both.  Apparently 3D printers have been available and in use for some time but have only recently become streamlined enough to fit into an office space.
·         A desktop 3D printer is expected to be available before long and to be affordable for office and home use.
·         The ability to print in 3D also includes the ability to modify and manipulate the image.
·         The process works by scanning an image and then laying down successive layers of material. A 3D printer takes a 3D computer file and constructs from it a series of cross-sectional slices. Each slice is then printed one on top of the other to create the 3D object.
·         “Three-dimensional printing makes it as cheap to create single items as it is to produce thousands and thus undermines economies of scale. It may have as profound an impact on the world as the coming of the factory did....Just as nobody could have predicted the impact of the steam engine in 1750 - or the printing press in 1450, or the transistor in 1950 - it is impossible to foresee the long-term impact of 3D printing. But the technology is coming, and it is likely to disrupt every field it touches.”  - The Economist, 10 February 2011
·         3D printing has also been used more recently to create, not just copy, 3 dimensional art, to reconstruct heavily damaged evidence acquired from crime scene investigations and to reconstruct bones and bofy parts in forensic pathology.  3D printing can produce a personalised hip replacement in one pass, with the ball permanently inside the socket, and even at current printing resolutions the unit will not require polishing.  Think about it: you can print a dinner set (it is now foodsafe), personal items, trinkets, objects of value, keepsakes.
·         One company invites users to create an object on their computers at home, send it to the company via computer and the company will then produce it in 3D.
·         A California company is even working on building houses. Its printer, which would fit on a tractor-trailer, would use patterns delivered by computer, squirt out layers of special concrete and build entire walls that could be connected to form the basis of a house.  “It is manufacturing with a mouse click instead of hammers, nails and, well, workers. Advocates of the technology say that by doing away with manual labor, 3-D printing could revamp the economics of manufacturing..”
http://www.nytimes.com/2010/09/14/technology/14print.html
·         There are already significant concerns about copyright issues associated with 3D printing.  One article has described the process, in this context, as the next Napster, referring to the earlier copyright file-sharing issues in respect of music –
http://arstechnica.com/tech-policy/news/2011/04/the-next-napster-copyright-questions-as-3d-printing-comes-of-age.ars

Posted by BytesMaster at 1:34 AM