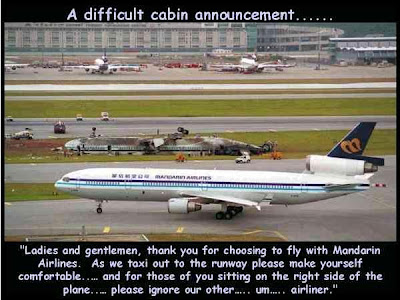 (Click on image to enlarge).
The above photograph is genuine.
It shows a Mandarin Airlines airliner taxiing past the burnt out remains of another Mandarin Airlines plane laying upside down adjacent to the runway.  The plane which crashed was enroute from Bangkok to Hong Kong I August 1999 when it sought to land at Hong Kong Airport at the same time as there was a strong crosswind from Typhoon Sam.  The plane came down too hard on its right side, causing the No 3 engine to hit the runway and the right wing to be torm off.  The plane rolled over and slide off the runway upside down.  It burst into flame and came to a halt on the grassy area shown above.
A video of the crash can be seen at:
http://www.youtube.com/watch?v=JuoeYaR4MP4

Surpisingly, out of the 200 passengers and 15 cabin crew, there were only 3 fatalities.

Posted by BytesMaster at 2:18 AM