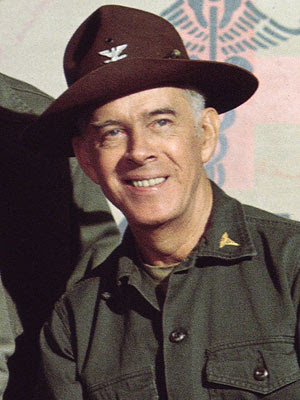 Notwithstanding that this is Funny Friday, the following item is somewhat sad.
Colonel Sherman T Potter of M*A*S*H died yesterday.  He was aged 96.  Actually it was Harry Morgan who died but Morgan played the Colonel Potter role and character so well that it is hard not to think of him as Colonel Potter.
I remember when I first saw the episode that ended with commanding officer Colonel Henry Blake finally finishing his tour in Korea and going home to his wife and kids.  That was back in 1975.  After Henry Blake says his final goodbyes and the rest of the team continues with the usual surgery, Radar  walks into the operating theatre in a daze and is told to put on a mask.  He softly tells them that Colonel Blake’s plane was shot down over the Sea of Japan and that there were no survivors.  The credits then roll in silence.  No one knew that was coming so it was a total shock.
I was determined not to like whoever replaced Henry Blake.  The same reaction was experienced by my son some years ago when he watched episode after episode after we bought the complete series on DVD.  I told him that he would end up liking Henry Blake’s replacement and sure enough he did.
Both Harry Morgan and Colonel Potter had some big shoes to fill, but they did it.
Some Harry Morgan snippets:
·         Harry Morgan was born in Detroit as Harry Bratsberg, of Swedish and Norwegian parents.
·         Harry appeared in films that included The Glen Miller Story (1954), How The West Was Won (1962) and The Shootist (1976).
·         Between 1967 and 1970 he played Joe Gannon, detective sidekick to  Detective Joe “Just the facts, ma’am” Friday in Dragnet.
·         Between 1975 and 1983 he played the fatherly, likable Colonel Potter but this was not his first appearance in M*A*S*H.  In the third season in 1974 he played  Major General Bartford Hamilton Steele ("That's three e's, not all in a row!"), a nutty, racist, nasty General who wants to move the 4077 closer to the front line, to be closer to the action.
·         Morgan also had a dark side.  In July 1997, he was charged with abusing his wife a year earlier, after a beating left her with injuries to her eye, foot, and arm.  Prosecutors dropped the charges after the 82-year-old actor completed a six-month domestic violence counselling program.
·          In several episodes of M*A*S*H, Colonel Potter was seen painting portraits, mainly of the other characters. These portraits were actually painted by Morgan.
Rest in peace, Sherm.