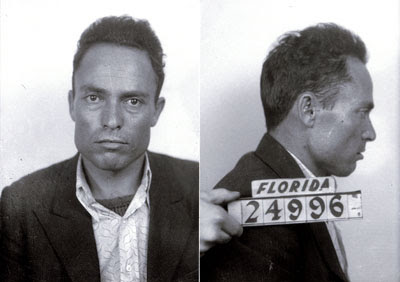 
-          Giuseppe Zangara (1900-1933),
at his execution for the attempted assassin of US President Elect Franklin D Roosevelt.  Not only is his story worth telling for Funny Friday, his exploit resulted in the coining of a well known word that is now part of the English language.  More of that later.
Zangara was born in Italy, served in WW1 and moved to the US in 1923.  Physical and mental problems, including delusions, eventually prevented him from working at his trade, bricklaying.

In 1933 he attempted to assassinate President Elect Roosevelt in Miami, Florida.  Being only 152 centimetres (5 feet in the old measurements, unless you’re American, in which case it is the current measurement) he was obliged to stand on a chair but as soon as he fired the first shot he was dragged down by persons nearby.  As a result he fired 4 more wild shots.  Five people were shot, including Chicago mayor Anton Cermak, who had been standing next to Roosevelt.
Zangara confessed to the shootingsand stated “I have the gun in my hand.  I will kill kings and presidents first and next all capitalists.”  He pleaded guilty to four counts of attempted murder and was sentenced to 80 years in prison. As he was led out of the courtroom, Zangara told the judge: "Four times 20 is 80. Oh, judge, don't be stingy. Give me a hundred years." The judge, aware that Cermak might not survive his wounds, replied: "Maybe there will be more later."
Nineteen days later and 2 days after Roosevelt’s inauguration Cermak died of peritonitis.  Zangara was then charged with murder, to which he pleaded guilty.  On being sentenced to death he stated "You give me electric chair.  I no afraid of that chair! You one of capitalists. You is crook man too. Put me in electric chair. I no care!"
Under Florida law, a convicted murderer could not share cell space with another prisoner before his execution, but another convicted murderer was already awaiting execution at thew prison in which he was held.  Zangara's sentence required prison officials to expand their waiting area and the "death cell" became Death Row.
When he had learned that his final moments would not be filmed by newsreel cameras he had become enraged.
Ten days after being put on Death Row, Zangara was executed in Old Sparky, the electric chair at Florida State Prison.