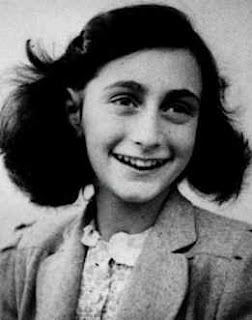 “I don't think of all the misery, but of the beauty that still remains.”

Annelies "Anne" Marie Frank (12 June 1929 – early March 1945) lived most of her short life in or near Amsterdam, Holland.  Being Jewish, she and her family were subject to the Nazi persecution after the German occupation of the Netherlands during World War 2.  From July 1942, when Anne was 13, she and her family went into hiding in hidden rooms of the building where her father, Otto, had a business.  Others were later also accommodated. On the morning of 4 August 1944 the group was betrayed and they were transported to concentration camps.  Anne and her sister Margot died of typhus in Bergen-Belsen.  Otto Frank survived Auschwitz, the only one of the group to survive, and was later given Anne’s diary which she had maintained during the years in hiding.  It had been retained by one of the workers in the building, Miep Gies, who had hoped to return it to her.

Posted by BytesMaster at 8:05 PM