World No Tobacco Day and Blowing Smoke up One's Arse. . .

Today, 31 May, is World No Tobacco Day, hence the posting of the following item.  I try to avoid lengthy items during the week but hopefully it will not be too long a read. 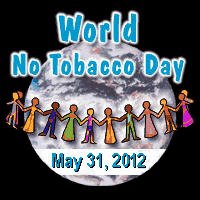 While watching a past episode of Law & Order: SVU (one of my fave TV shows), the hardbitten, older female ADA said to the defence lawyer “Don’t blow smoke up my arse, counsellor . . .”

This started me wondering on the origin of the expression.

In doing some research on the topic, I also became aware that there are a number of suggested meanings for the term.

I used to think that the expression “to blow smoke up someone’s arse” meant to praise excessively and insincerely.

To lie, for selling a line of nonsense to an otherwise naive or unsuspecting rube.

Complimenting a person merely to gain something in return.

Giving a gratuitous and insincere compliment, possibly to deceive. (Can be my, your, his, or her ass, but probably not plural, as in their asses.)

All have the sense of false flattery, insincerity and an ulterior motive.

An explanation that is frequently offered for the origin of the phrase is that it comes from the days when tobacco smoke enemas, the blowing of smoke into the rectum, was an accepted medical procedure. I kid you not.

Europeans began using tobacco as a medicine not long after its introduction from the New World.

Tobacco smoke was used by western medical practitioners as a tool against cold and drowsiness, but applying it by enema was a technique appropriated from the North American Indians. The procedure was used to treat gut pain and to resuscitate victims of near drowning. Liquid tobacco enemas were often given to ease the symptoms of a hernia.


The Dutch had experimented early with methods of inflating the lungs, as a treatment for those who had fallen into their canals and apparently drowned. Patients were also given rectal infusions of tobacco smoke, as a respiratory stimulant. In the 1780s the Royal Humane Society installed resuscitation kits, including smoke enemas, at various points along the River Thames, and by the turn of the 19th century, tobacco smoke enemas had become an established practice in Western medicine. Such a treatment was considered by Humane Societies to be as important as artificial respiration.


The practice fell into decline from the early 19th century when it was discovered that the principal active agent in tobacco smoke, nicotine, was poisonous.

Bear in mind that this was at a time when mercury was used to cure syphilis and morphine/opium compounds were given to children to make them sleep.

The manner of delivery varied. It usually involved the insertion of a tube into the rectum with tobacco smoke then being blown into the tube by either mouth or bellows. 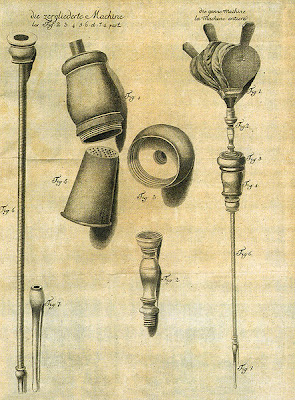 A 1776 textbook drawing of a tobacco smoke enema device, consisting of a nozzle, a fumigator and a bellows. 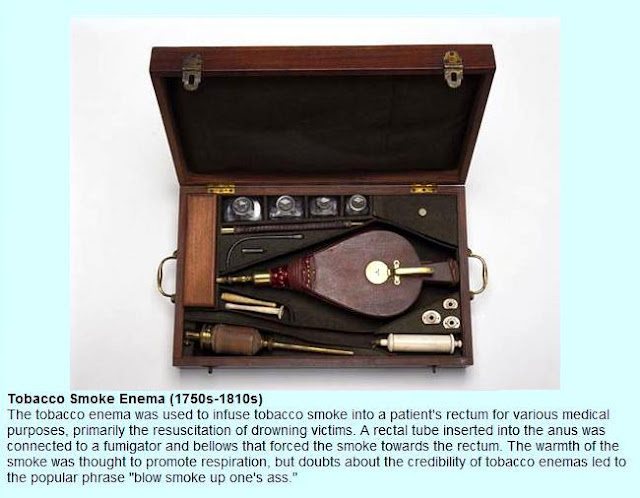 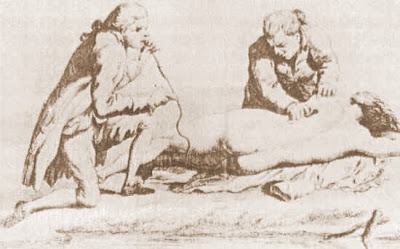 A depiction of an attempt to revive a drowned person using chest massage and a tobacco smoke enema.


There is a very funny discussion in that superb Brit TV program QI on the topic of tobacco smoke enemas. A clip of that discussion can be viewed by clicking on the following link:
http://www.youtube.com/watch?v=6Pgsl8VEZ5E

It has been commonly suggested that when it was proved that tobacco smoke enemas were toxic rather than therapeutic, the term “blowing smoke up [his/her/my] arse” came to be applied to false flattery designed to achieve a hidden purpose.

It is further suggested that the feel good effect for a cold near-drowning victim of warm tobacco smoke being inserted rectally into the body is akin to the warm feelings of flattery and compliments.

This is a nice, neat suggestion but, as someone has pointed out, it is a little two neat and tidy and has the ring of those untrue emails that do the rounds as to how raining cats and dogs etc originated.

Cassell's Dictionary of Slang says that the term comes from an older expression, "to blow smoke".

According to the Online Etymology Dictionary, the association of smoke with "deception, deliberate obscurity" dates back to at least 1565.

The word “smokescreen”, meaning a form of military camouflage dates from 1915 and has the same meaning, to obscure by smoke.

Cassell’s states that "blow smoke up someone's ass, to" dates from the 1950s and is an intensifier of the older phrase “to blow smoke”.

Which leads me to the final item, the enema story:

A travelling clothing salesman found himself in the small town of Climax, Saskatchewan, a little whistle stop that had only one hotel.

He takes a room - No 323 - and goes down to the dining room for dinner. The waiter lauds the specialty of the house, the potato soup. “This hotel is famous for its potato soup,” he says,” people come for fifty, seventy-five miles around just to have some of our potato soup.”

“I don’t want any potato soup, thank you,” says the salesman.

Another employee approaches him and asks, ”Why not have some potato soup after your salad. It is very good. Famous actually, healthy, nutritious, and you really should have some.”

As the traveller was ending his meal the chef came out of the kitchen and said, “Why not finish off the meal with a bowl of our famous potato soup?”

The salesman rose angrily from the table and went up to room 323. There is little to do for entertainment in Climax so he climbed into bed for an early night’s sleep.

During the night the chap in 322 with his wife gets very sick with a gastric disorder. It is so bad that his wife has to phone the doctor. The doc says, ”I know his condition, it is dangerous - he had better have a high colonic enema immediately. I’ll send over two medics from the hospital to do it right away. What room are you in?”

In the excitement the wife gets the room numbers wrong and says “Number 323”.

The medics come and go to room 323. Although the salesman puts up one helluva fight, they give him a high colonic enema anyway.

A week later one of his friends says to the salesman that he has to go down to Climax on business. “I hear you were down there recently. Can you recommend a place to stay?”

“Well,” says the salesman, “there’s only one hotel in town so you have to stay there. But let me tell you this - if they ask you if you want the potato soup - TAKE IT - because you are going to get it one way or the other…!”