Caution:
The following images and contents may be distressing. It concerns what is happening in the Ukraine and adopts an unashamed pro-Ukrainian, anti-Russian stance.

On a visit to my father in law in Canberra over the Easter weekend, we watched with him some of the episodes of The World at War, the excellent 26 part documentary series that aired in 1973-1974 and was narrated by Sir Laurence Olivier. I commented that the episode we were watching about the Holocaust and the treatment of the Jews and other victims was similar in some ways to what was happening in the Ukraine.
I then read a Bored Panda post from 5 days ago that showed some of the heartbreak and tragedy happening in the Ukraine.
Not only did it strongly move me, it had me wondering what would happen in our country, Australia, if similar events took place.
The post deserves re-posting.
Below are the photographs and headings from Bored Panda, together with selected reader comments.
The link for the Bored Panda post is:
https://www.boredpanda.com/heartbreaking-moments-ukraine-russia-war-part-2/?utm_source=newsletter&utm_medium=email&utm_campaign=Newsletter 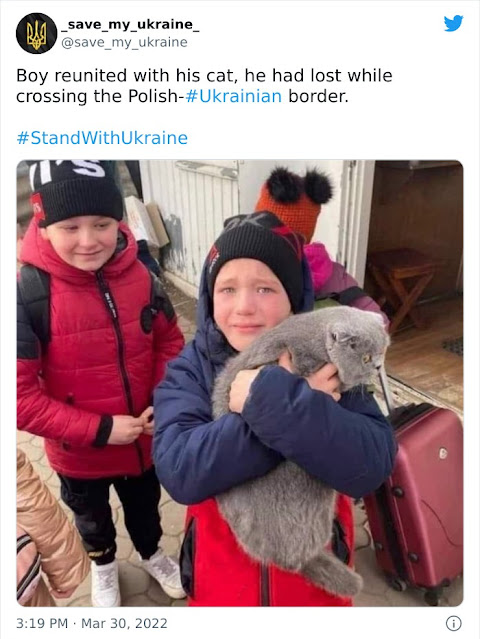 Reader comments:
The trauma on their faces !! Thankfully they managed to survive...
This is so heartbreaking but I'm so so so happy he reunited with his kitty. May they live together in harmony!
His little face.
Pure love
The little things will mean so much.
They really do. You can tell it means a lot to the little boy.
Nothing worse than thinking your beloved pet is dead.
Omg, I cried!
------
A Ukrainian Man With Down Syndrome Bakes Bread To Feed Ukrainian Soldiers Fighting The War. 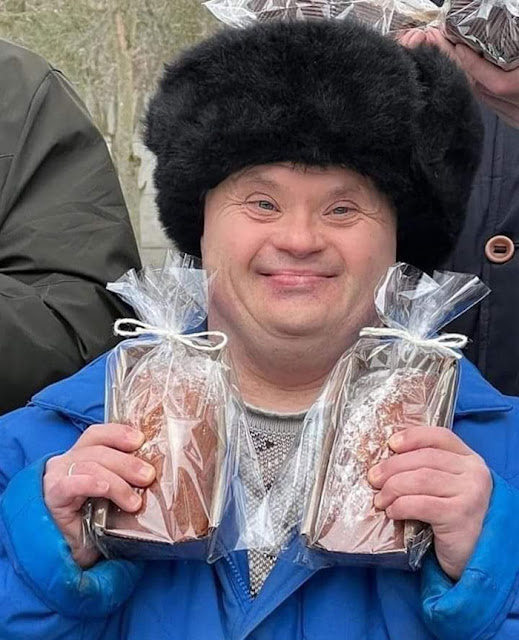 Reader comments:
Bless him !!
I love him. As a mom of an adult male with DS, this is so special.
He looks like the nicest man ever!
Please god protect this man and all the others going through this terrible war
Wow. That’s just amazing! He needs a medal!
So sweet, and sad, at the same time
What a beautiful soul!
------ 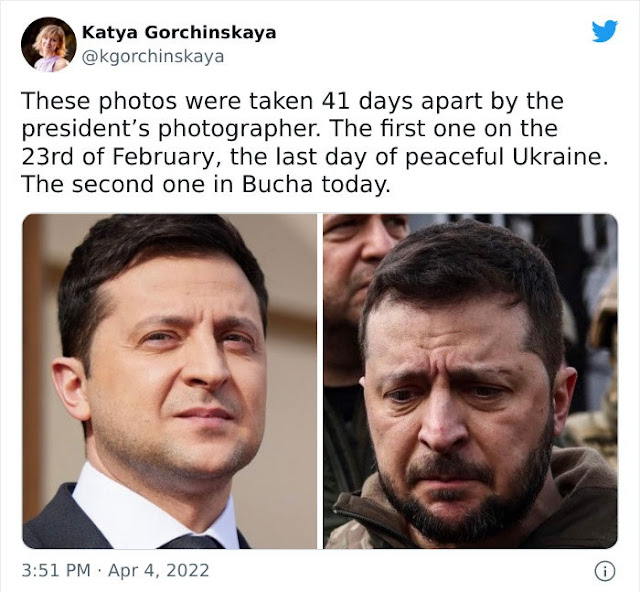 Reader comments:
There was so much focus on president Zelinskyys rise from a comedian to President of Ukraine...some sneering and laughter and not wildly popular amongst Ukranians,but when he started to first stand up to Trump and not give in to the dirty games of Trump and being punished by the then administration of the US ,withholding much needed help then he stood his ground.Heroes do not come ready-made and this man has shown to his people and the World that here is a man with true grit and integrity. The photos tell it all...He Cares... and is passionate about his fight to uphold Democracy and the right to live your life the way you choose...He knows there is a target on his head...may God protect him and help the millions who now are paying the price of being neighbours to a megalomaniac who cares only about his power and illicit gained wealth.
He looks like he's aged ten years in the last six weeks.
These are photos of a true man. One who will win or die in the effort of defending his nation.
His heart is broken.
But he has nerves of steel. True inspirational leader.
My heart goes out.
Zelinskyy is the prime example how important the role of a leader is. People of Ukraine is so lucky to have him as their leader. The stark comparison is between Zelinskyy and Ashraf Ghani, the last (ex-)president of Afghanistan:
1) Ukraine was facing the threat of invasion from Russia, while Afghanistan was facing the threat of coup from Taliban
2) Ukraine was lack of military power and ammunition compared to Russia, while Afghanistan was backing by the US military which made them significantly more powerful than Taliban
3) Both leaders (Zelinksyy and Ashraf Ghani of Afghanistan) were facing rampant corruption in their respective countries.
4) When the enemies attacked (Russia invaded Ukraine and Taliban took over the Kabul, the capital of Afghanistan), their leaders make 2 OPPOSITE actions: Zelinskyy refused to be evacuated by the US, while Ashraf Ghani and family escaped to UEA as political refugees, taking as much money as they could
5) The result: Taliban was taking over Kabul within HOURS after the last of US troops left Afghanistan. The Afghanistan soldiers gave up easily, even though they had abundant of military weapons and equipment left by the US for them to be used against Taliban.
On the other hand, since Zelinskyy chose to stay and fight with his people, the Russia HAS NOT BEEN ABLE TO fully occupied Ukraine, regardless their more superior weapons and military power.
------
23-Year-Old Nazar Nebozhenskyi, Who Saved 20 Fellow Soldiers By Drawing Fire From 3 Russian Btrs To Himself And Destroying 2 Of Them, Being Mortally Wounded In The Process. Remember His Name 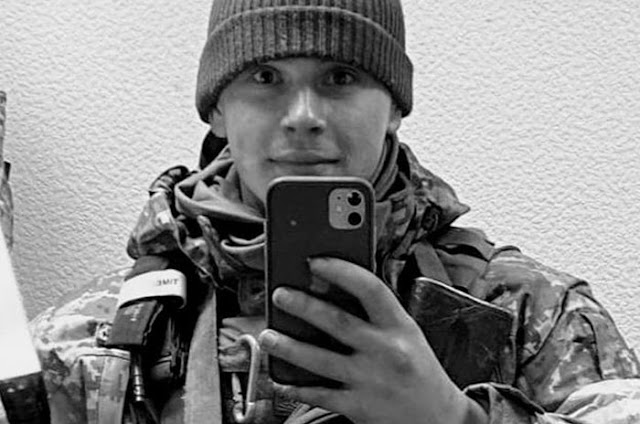 Comment:
A BTR is a Russian amphibious armoured personnel carrier: 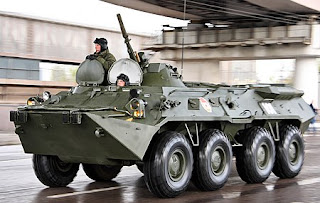 Reader comments:
You won't see this kind of thing from the Russians. Not because Russians aren't brave, but because the Ukrainians are fighting for their lives, their families, their country, their very existence. The Russians have no clue why they're there or what they're fighting for. They know the reasons Putin gave are lies, because unlike the Russians back in Russia, they're seeing the truth with their own eyes. Nazar's heroism is the heroism of a man who believes in what he is fighting for and believes it is worth his life. RIP Nazar.
------ 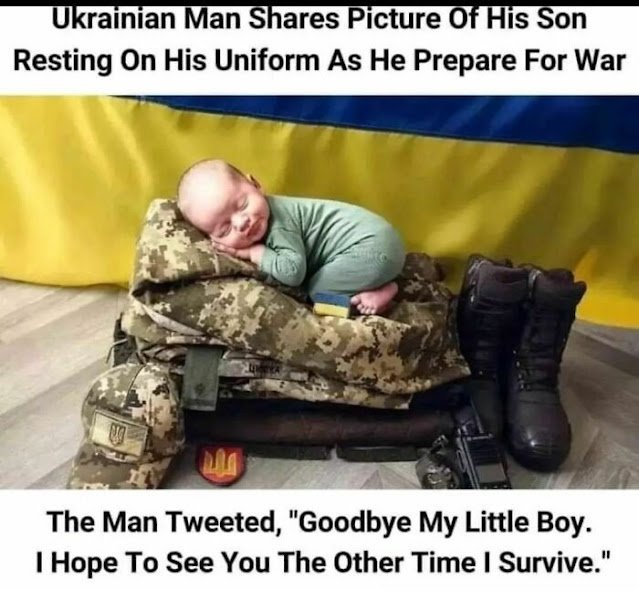 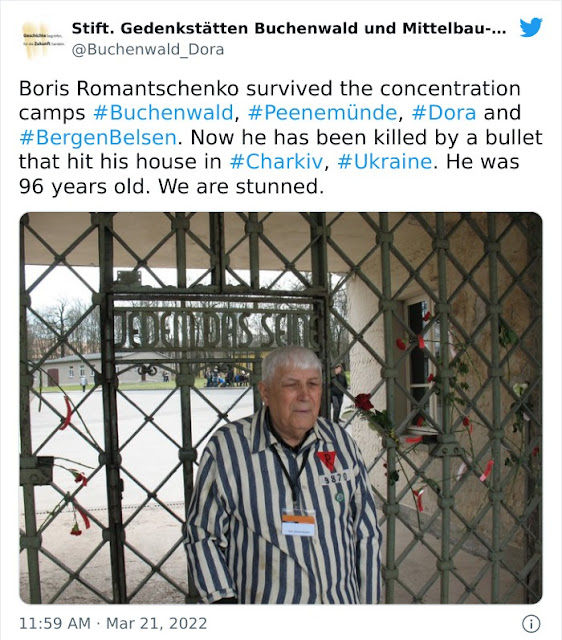 Reader comments:
This is probably one of the saddest stories I've heard so far.
But the Ukrainians are the Nazis in this scenario, Putin says so! RIP Boris, you deserved to die peacefully in your bed surrounded by your loved ones.
G*dd#amnit! I really really really really hate when I read crap like this. You live this long, you lived through that much and this is what happens to you. He deserved to die peacefully in his sleep. This is wrong on so many levels
This whole story is truly heartbreaking. What bothers me even more about this one is that I only recognized two of those camp names. How many freakin' camps were there?! Damn, humanity sucks sometimes. May he finally rest in peace.
At least he wasn't young. He lived a long life. Can't really say a good one.
------ 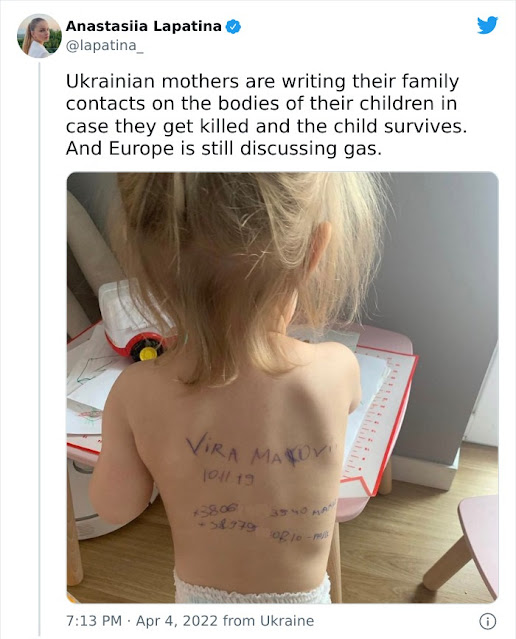 Reader comments:
I can't even imagine what must be going through the mother's minds as they have to decide which family members should be contacted because their death is a very real possibility.
Dear Lord please take care of these people. Brings tears to my eyes.
I have kids around this age and I cannot imagine how this is happening. I feel sick for them
Evil must not prevail.
OMG!
------ 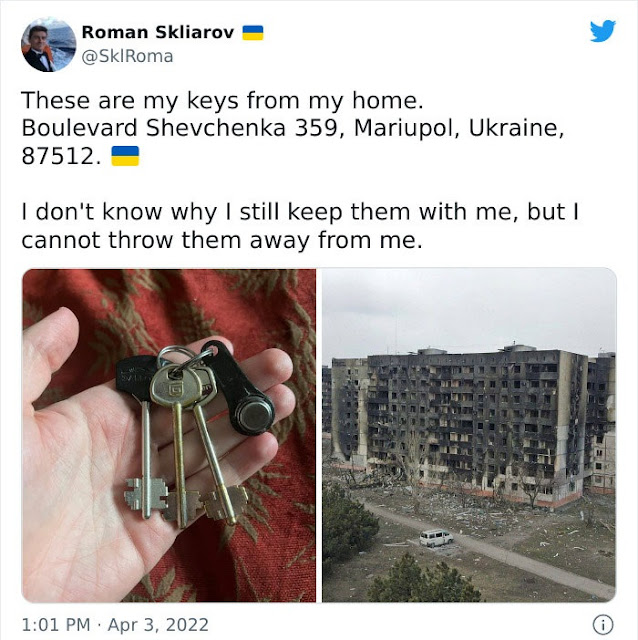 Reader comments:
The last link to a once peaceful life....of cause you hold on to them...hope is the last to die and God willing you will one day once again unlock a door to a new home..
Don't ever let those keys go my friend!! I hope you make it I hope you survive to see better days!! I don't know you but I love you! I wish I had powers.....I'd make all this go away!! :(
You cannot throw them away because they represent your home, your safe haven. I pray you can use them again when Ukraine has triumphed over tyranny
Because they are the keys to where you heart still is.
Maybe it's the good memories
------ 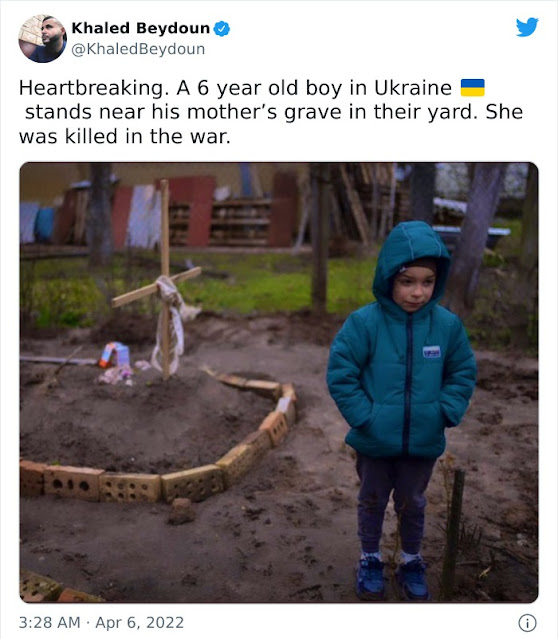 Reader comments:
The poor little mite...my heart breaks for him..
This made my heart hurt so bad. My son is 6, and this hit home. This poor boy, I wish I could reach into the picture and hug him and help him. 😢
There is a later picture of this boy bringing cans of food to the grave. Breaks my heart
He and his brother, 10, said they bring food for their mum to not be hungry anymore.. she was starved to death.. absolutely devastating
Jesus I hate humans at times.
They are burying people in the medians of busy highways as well
His mother wasn't killed "by the war" unless she was in the Ukranian forces. She was killed as a civilian victim of Russian war crimes, more likely,.
His mother starved to death during the siege of Mariupol. The boy keeps bringing food and water to her grave. Heartbreaking.
------
Defenders Of Ukraine Don't Leave Anyone In Trouble 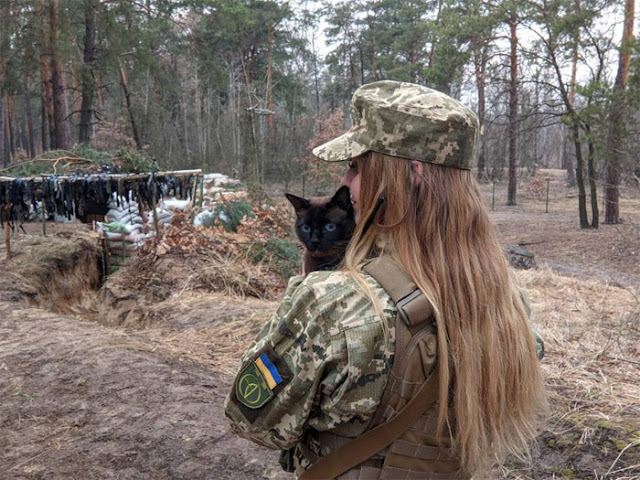 Reader comments:
This fur warrior is doing something important for her. Petting animals lowers BP, among other things both physical as well as psychological. They rescued each other.
Make me wonder what animals think of human madness?
------ 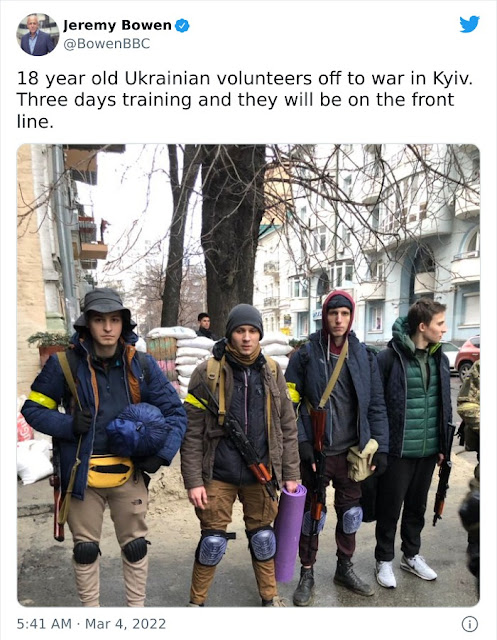 Reader comments:
This picture hurts my heart. My oldest is 20, my middle is 17. This could be either of them
Yes, I have a son who will be 18 in a few months. I can't imagine sending him off to war.
Without the rifles, they look like kids getting ready for a camping trip.
They have the eyes of tired old men. At 18.
Stop it. Those are boys. They hate this, but it is not their job. What will we say? That they died fighting against Putin ? That we forgot what boys are for? Or maybe we say oops, sorry you got caught in a war?
------
Volodymyr Zelenskyy Awarded The Order "For Courage" Of The Third Degree to Mayor Of Melitopol Ivan Fedorov, Who Returned From Captivity And Refused To Cooperate With The Occupiers. Glory To Ukraine. 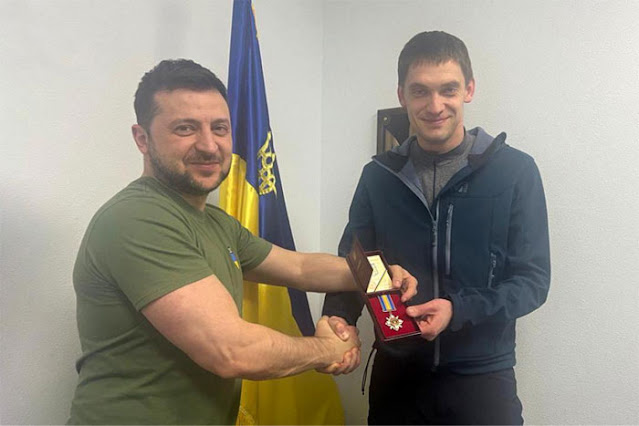 Reader comments:
Slava Ukrayina!
Mayor is an unpaid role, right? I have so much admiration for these people that will not be cowed
He looks so young...
These are the type of people that I would love to have running the country. They are brave, loyal to the people and stand up for what is right
------
Ukrainian Female Soldiers Rescued From Captivity. The Afu Army Manual Does Not Provide For Women To Shave Their Heads. This Was Done In Russian Captivity 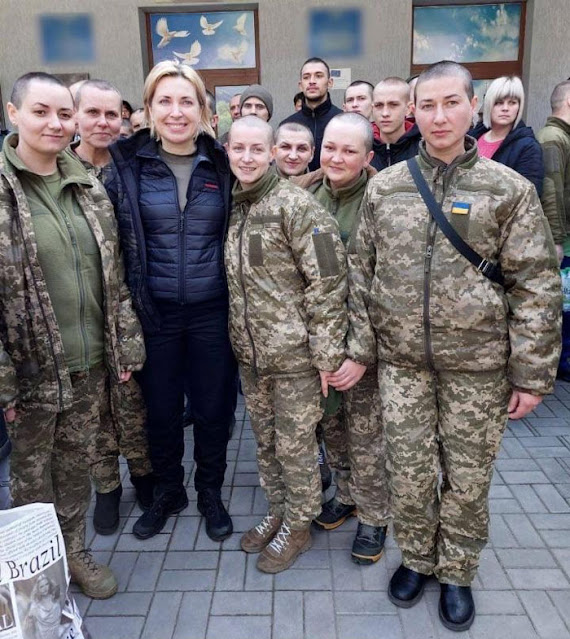 Reader comments:
Can the world's leaders please wake up and realise how similar this is to the holocaust? I'm sure the whole world can agree that should never happen again, but look at these photos!
With this comment, why is no one stating the obvious: Putin called the Ukrainians Nazi mongers. The irony!
The Germans did this in the Camps. It helped differentiate any escaped prisoners from local populations. Women with shaved heads stand out in a population where it's not a common hairstyle. Makes it easier to find escapees trying to blend in with the locals. It was disgusting then, it's disgusting now.
Shaving a woman’s hair is also a way to dehumanize them, and take away their power.
Powerful photo. The caption is interesting because having their heads forcibly shaved most likely ranks among the least of their problems.
Being a captured female soldier would be horrible...
Gods..female PoW? Yea...I'd rather die. These women are strong and brave and I am so sorry for the trauma each suffered
Everyone is saying 'never again' but it's happening right now in villages and cities in Ukraine. Shame the world isn't doing more
I think world leaders are doing as much as they can, while trying to avoid world war three.
It's done to dehumanize them, mental torture.
Wear that style with pride. You lived through what most people have nightmares about.
Considering the head shaving is just a reminder for all the other torture they suffered, including (but certainly not limited to) rape. I wouldn't want to keep that short hair. It would remind me too much of what happened to me. This comment is hella short sighted.
When people don't learn from the past...it's destined to repeat !

More to come.
Posted by BytesMaster at 12:10 AM