Yesterday being International Talk Like a Pirate Day, it seemed obvious as to what the theme for today’s Funny Friday should be. . . 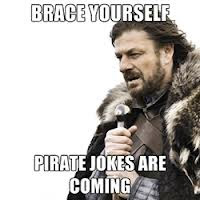 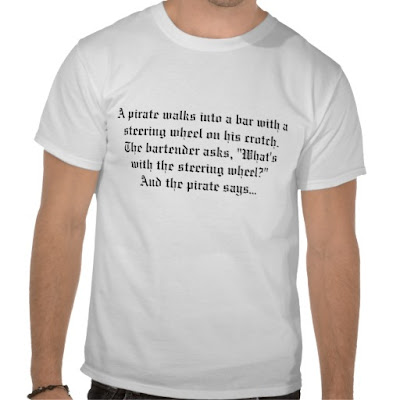 How much does it cost a pirate to get his ears pierced?

What has eight arms, eight legs and eight eyes? 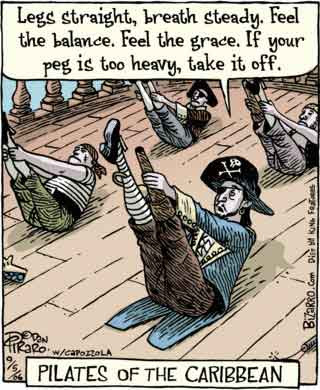 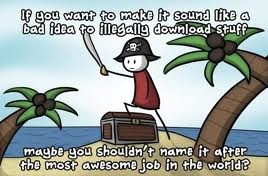 A pirate is starting his first day aboard his new ship and the captain is giving him the tour. ''That be the plank for trouble makers, that be the deck that needs swabbing everyday and there be the barrel for all your sexual needs.''

''Well, you stick your willy in the bung hole and you'll be serviced, anytime you want, except for Wednesdays.''

''What happens on Wednesdays?''

I'll finish the steering wheel one for you... ...but this one you will have to work out:

There was an old man from Dunoon,
Who ate soup with a very small fork.
He said "As I eat
Neither fish, foul nor flesh,
I should otherwise finish too quick."

Okay, I'll help with that one as well. The original is:

There was an old man from Dunoon
Who ate soup with a very small spoon.
He said, "As I eat
Neither fish, fowl, nor meat,
I should otherwise finish too soon."

Posted by BytesMaster at 3:38 AM