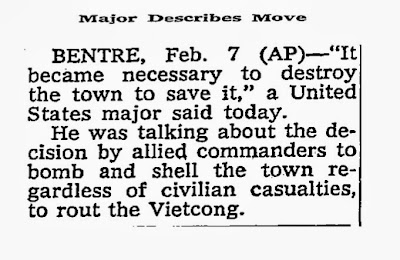 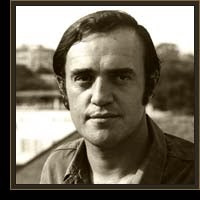 " 'It became necessary to destroy the town to save it',
a United States major said today. He was talking about the decision by allied commanders to bomb and shell the town regardless ofcivilian casualties, to rout the Vietcong.”

- Statement attributed to an unnamed U.S. officer by Associated Press correspondent Peter Arnett in his writing about Bến Tre city on 7 February 1968.

Ben Tre is the capital city of Ben Tre Province in the Mekong Delta area of southern Vietnam. Nearly destroyed by Allied bombing, it played a significant role in the Vietnam War.. Reports of the assault and resulting civilian casualties called into question the war aims of the United States. 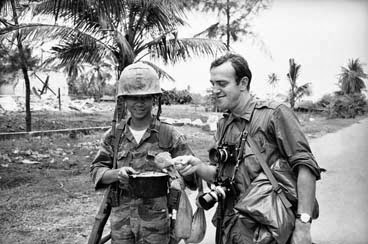 Arnett (above, right) was a junior AP reporter when he was covering the war in Vietnam, later going on to become CNN’s chief correspondent during the Gulf War. Back in 1968 during the Tet Offensive a small American unit battled the Viet Cong for 2 days in the battle of Ben Tre. Arnett entered the city after it was secured and spoke with various army officers, later saying that the comment was made by one of the officers he spoke to but refusing to identify which officer. Then Major Phil Cannella believes he is the officer quoted but says that it was taken out of context and quoted incorrectly, maintaining that he said the Viet Cong had destroyed the town and it was a shame.

Nonetheless the phrase has developed a life of its own and is often quoted, as it was then, to illustrate the absurdity of war and of military thinking.

"Bomb them back to the stone age."
- U.S. General Curtis LeMay during the Vietnam War

“Better dead than red.”
- Anti-communist phrase first used during World War 2 and believed to have been coined by Nazi Germany’s propaganda minister Joseph Goebbels to incite opposition to the Soviet Red Army. It was used udring the Cold War and trotted out again during the Vietnam War.

“If you've got them by the balls, their hearts and minds will follow.”
- U.S. Green Berets slogan during the Vietnam War.

Posted by BytesMaster at 2:29 AM