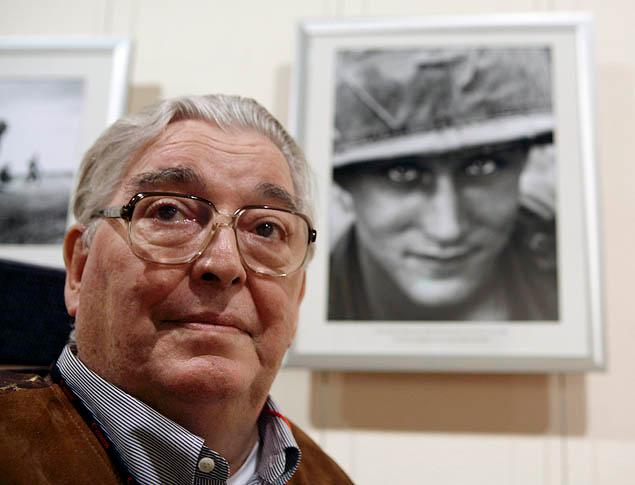 Although legendary photo-journalist Horst Faas (1933-1912) was best known for his images of the war in Vietnam, his bio makes Chuck Norris look like a pussy.  Horst Faas was the John Wayne of photo journalists.

Here is the bio on him from Wikipedia:

Born in Berlin, Germany, Faas began his photographic career in 1951 with the Keystone Agency, and by the age of 21 he was already covering major events concerning Indochina, including the peace negotiations in Geneva in 1954. In 1956 he joined the Associated Press (AP), where he acquired a reputation for being an unflinching hard-news war photographer, covering the wars in Vietnam and Laos, as well as in the Congo and Algeria. In 1962, he became AP’s chief photographer for Southeast Asia, and was based in Saigon until 1974. His images of the Vietnam War won him a Pulitzer Prize in 1965. In 1967 he was severely wounded in the legs by an RPG (rocket-propelled grenade)) and used a wheelchair for the rest of his life. In 1972, he collected a second Pulitzer, for his coverage of the conflict in Bangladesh. Inside Bangladesh, photographer Rashid Talukder considered it too dangerous to publish his photographs and he released them more than twenty years after Horst's photographs had appeared.
Faas is also famed for his work as a picture editor, and was instrumental in ensuring the publication of two of the most famous images of the Vietnam War. The notorious :Saigon Execution” " photograph, showing the summary execution of a Vietcong prisoner by Saigon police chief Nguyen Ngoc Loan, taken by Eddie Adams in Saigon on February 1, 1968 was sent under his direction. Nick Ut's famous “Napalm Girl” photograph caused a huge controversy over at the AP bureau; an editor had objected to the photo, saying that the girl depicted was naked and that nobody would accept it. Faas ordered that Ut's photo be sent over the wire.
In September 1990, freelance photographer Greg Marinovich submitted a series of graphic photos of a crowd executing a man to the AP bureau in Jiohannesburg. Once again, AP editors were uncertain if the photos should be sent over the wire. One editor sent the images to Faas, who telegrammed back, "send all photos."
In 1976, Faas moved to London as AP’s senior photo editor for Europe; he retired in 2004. In retirement he organised reunions of the wartime Saigon press corps and ran international photojournalism symposiums.
He produced four books on his career and other news photographers, including Requiem, a book about photographers killed on both sides of the Vietnam War, co-edited with fellow Vietnam War photojournalist Tim Page.

According to the 1965 jury that made recommendations for the Pulitzer awards:

“First choice: a portfolio on the Vietnam war by Associated Press photographer Horst Faas.  The jury was struck by the richness and diversity of the photographer’s work, consisting on the one hand of spot pictures, made in the midst of violent action, laden with the drama of the instant, and on the other hand a series of studies filled with artistry, compassion and deep sensitivity to the tragic environment of war.”

The recommendation was accepted by the determining Advisory Board and Horst Faas was awarded the 1965 Pulitzer.

Faas has such an extensive body of outstanding work that it is had to select images.  The Pulitzer jury was spot on in saying that his photographs graphically bring home the horror of war and its effect on humanity, not only on the innocent civilian men, women and children but also on the soldiers. On viewing his photographs, one is struck by the dehumanising, the poignancy and the randomness of death and war. . . 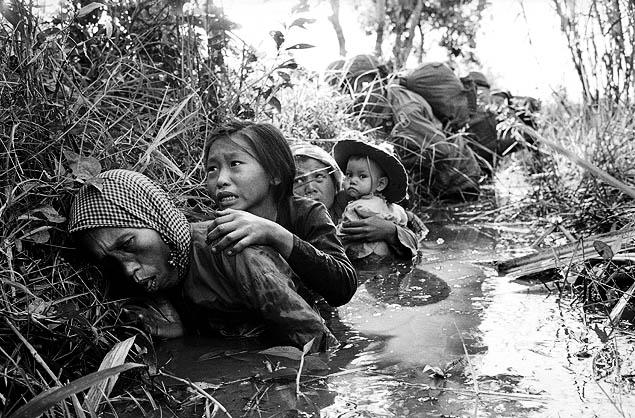 Women and children crouch in a muddy canal as they take cover from intense Viet Cong fire at Bao Trai, about 20 miles west of Saigon, in January of 1966 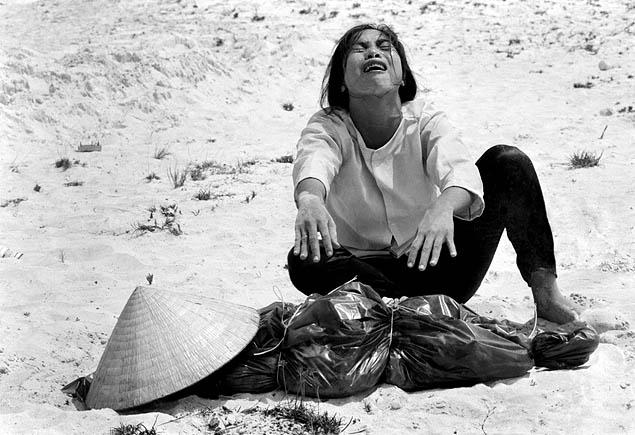 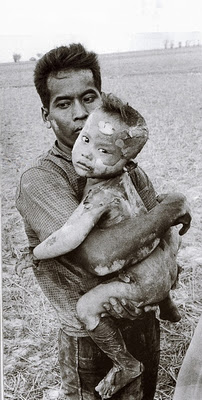 A father holding his son, a small child covered in napalm burns. The photograph was taken on March 19, 1964, shortly after Vietnamese forces had devastated a small village where suspected communist Viet Cong were hiding. The attack killed dozens of innocent people. 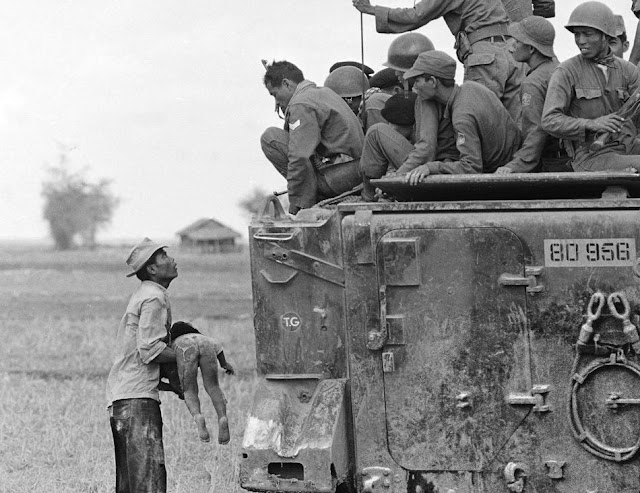 A father held the body of his child as South Vietnamese Army Rangers looked down from their armored vehicle on March 19, 1964. The child was killed as government forces pursued guerrillas into a village near the Cambodian border. This photo was one of several that earned Faas the first of two Pulitzer Prizes. 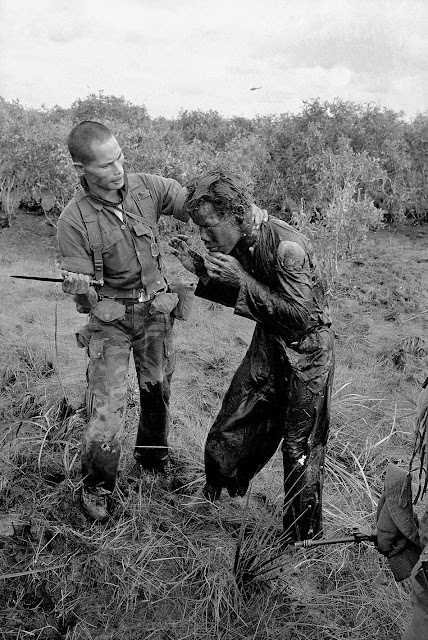 A South Vietnamese soldier uses the end of a dagger to beat a farmer for allegedly supplying government troops with inaccurate information about the movement of Viet Cong guerrillas in a village west of Saigon, Vietnam, on Jan. 9, 1964. This photo was also one of several that earned Faas his first Pulitzer. 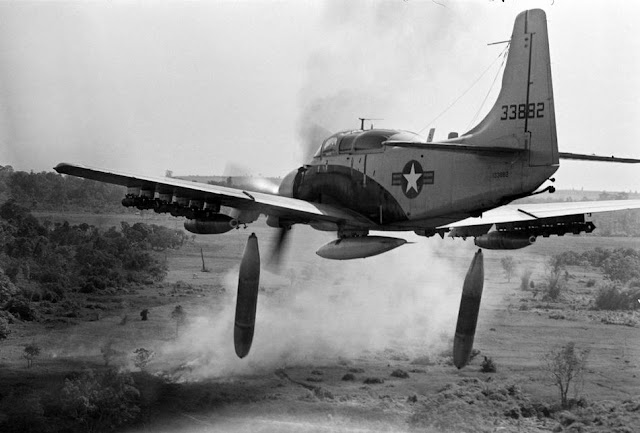 Flying low over the jungle, an A-1 Skyraider drops 500-pound bombs on a Viet Cong position below as smoke rises from a previous pass at the target, Dec. 26, 1964. 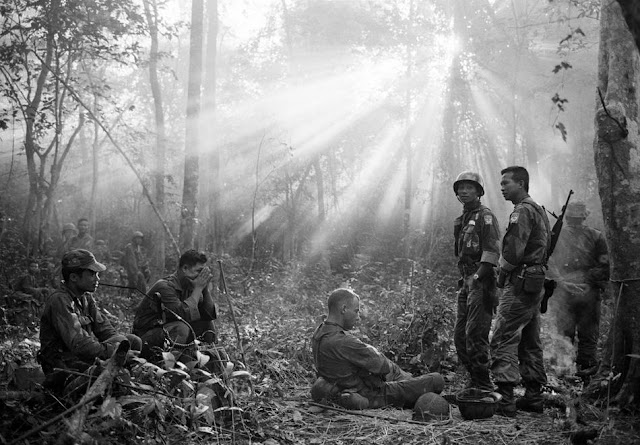 January 1965:   The sun breaks through dense jungle foliage around the embattled town of Binh Gia, 40 miles east of Saigon, as South Vietnamese troops, joined by U.S. advisers, rest after a cold, damp and tense night of waiting in an ambush position for a Viet Cong attack that didn't come 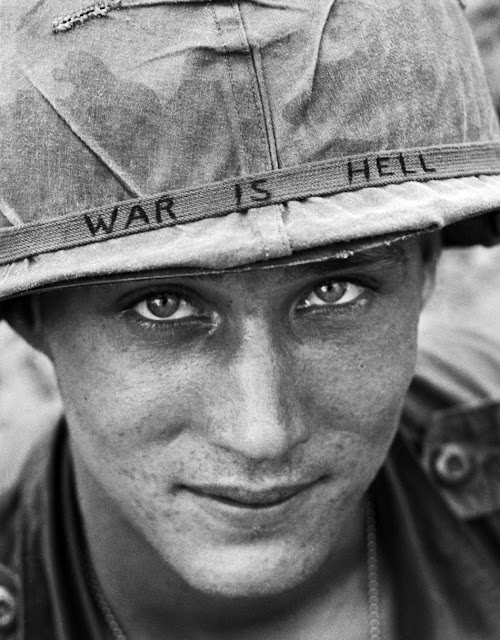 An unidentified U.S. Army soldier wears a hand lettered "War Is Hell" slogan on his helmet, June 18, 1965, during the Vietnam War. He was with the 173rd Airborne Brigade Battalion on defense duty at Phouc Vinh airstrip in South Vietnam. 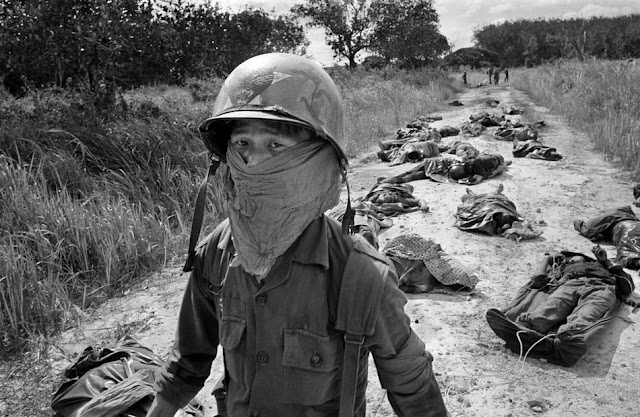 In this Nov. 27, 1965 photo, a Vietnamese litter bearer wears a face mask to keep out the smell as he passes the bodies of U.S. and Vietnamese soldiers killed in fighting against the Viet Cong at the Michelin rubber plantation, about 45 miles northeast of Saigon. 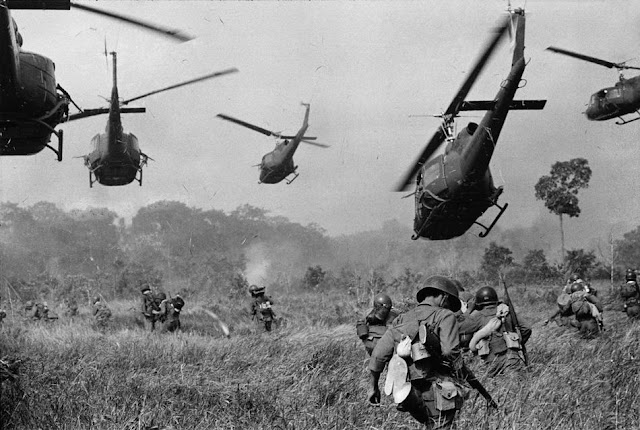 In this March 1965 photo, hovering U.S. Army helicopters pour machine gun fire into the tree line to cover the advance of South Vietnamese ground troops in an attack on a Viet Cong camp 18 miles north of Tay Ninh, Vietnam, northwest of Saigon near the Cambodian border. 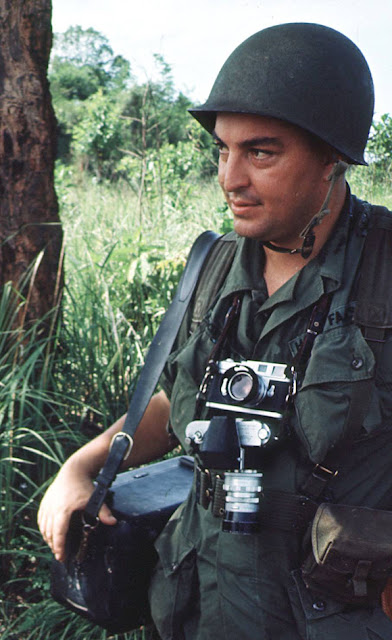 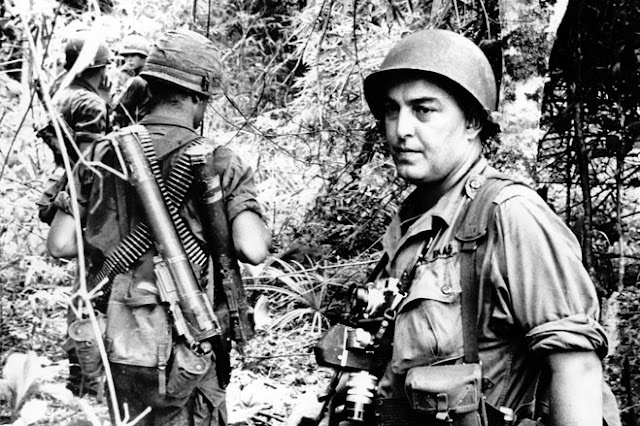 Horst Faas on assignment in Vietnam

Posted by BytesMaster at 3:24 AM