Some reader emails . . .
Email from Steve M in response to the most recent post about Hollywood’s Golden Years:

Enjoyed the Hollywood silent movie bytes yesterday, Otto. Some great wit and comebacks in there!
When was the word ‘movie’ first used instead of the word ‘film’? And when they added sound to film, were films then known as ‘talkies’?
Steve

The use of the word “movies” in 1913 in the weekly newspaper The Outlook was in inverted commas, suggesting that the word at that time was still slang.
---------oOo--------
Film:
The word “film” originates from the Middle English filme, from Old English filmen (“film, membrane, thin skin, foreskin”).
Photographic film is a strip or sheet of transparent film base coated on one side with a gelatin emulsion containing microscopically small light-sensitive silver halide crystals.
From the Online Etymological Dictionary:

---------oOo--------
Is there any difference between a film and a movie?
I have read that the preferred, more refined expression in England is film, whereas in the US and Canada the abbreviation of moving film to movie caught on more, so that that became the favoured expression.
It has also been suggested that film refers to more serious works, whereas movie is for more for entertainment, such as Hollywood blockbusters. One commentator has written: “A film can be commercial, but it has a larger purpose than just making money. A movie is a commercialized product created for mass consumption. Its sole purpose is profit.”
https://www.quora.com/What-is-the-root-of-the-word-movie-and-why-is-it-used-instead-of-film
Stanley Kauffman hated the term movie; he said it was baby talk, a little like calling a book a "printie."
For my own part, I think that today the terms are interchangeable with little difference in meaning in common usage, notwithstanding that photographic film is no longer used.
---------oOo--------
Flick:
According to the Online Etymological Dictionary:

As slang for "film," it is first attested 1926, a back-formation from flicker (v.), from their flickering appearance.

It has been suggested that the word was in use much earlier and that it stems from the unreliable equipment and process for showing films. In those early days projectionists had to tend to their projectors carefully, the light in early projectors being a very early arc lamp. This is a form of lighting that goes back to the 1800s and, in its most primitive form, it involves running two different levels of voltage through two carbon rods. The vapour which results is streaked by electricity, illuminating the vapour and whatever is beyond it.
Even the best attendants found their lamps sputtering and shimmering, with the result that the images on screen flickered. This is what got movies the nickname of “flickers” or “flicks.”
---------oOo--------
Talkies:
From Online Etymological Dictionary:

Interestingly, the word walkie talkie dates from 1939, becoming popularised in World War II army slang,. It comes from walk + talk.
---------oOo--------
Silver screen:
When people first started attending “the pictures” in the 1910s, movie screens were coated with reflective metallic paint, resulting in a silver surface to better display the projected images.
By the 1920s, the term silver screen moved beyond the literal realm and into metaphorical territory to apply to cinema in general.
---------oOo--------
Cinema:
The word cinema comes from the French cinéma, shortened from cinématographe, coined 1890s by Lumiere brothers, who invented it, from the Greek cinema (movement).
---------oOo--------
By the way, if you watch the credits at the end of a movie/film/flick, you will see the terms gaffer and best boy.
Here is what they mean:
Gaffer:
The chief electrician in a film or television production unit.
Best boy:
The assistant to the chief electrician of a film crew.
In British slang, a gaffer is also an overseer or boss, who is often older than his subordinates.
The father of Sam Gamgee in Tolkien’s Lord of the Rings is Hamfast Gamgee, who Sam refers to as “the gaffer”. Sam would be using it in that context rather than as the chief electrician to a film crew (ha ha).
The precise origin of the term “gaffer tape” is unknown, one theory being that it comes from the gaffer being the chief lighting technician on a film crew. When cables are taped down on a stage or other surface, either to prevent tripping hazards or conceal them from view of the audience or camera, they are said to be gaffed or gaffered.
---------oOo--------
Bonus item:
Some old theatres and cinemas in Sydney, many now gone . . . 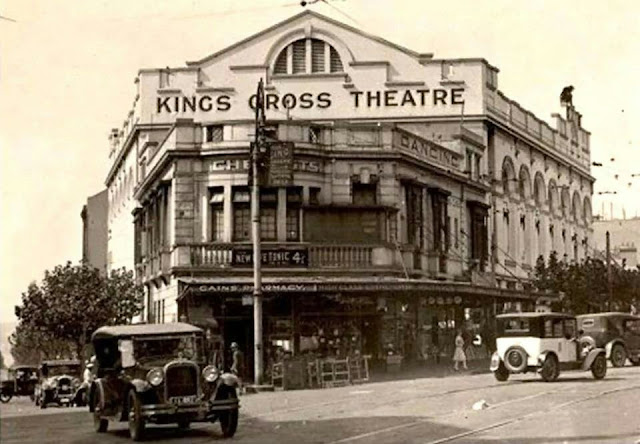 Kings Cross Theatre
The King’s Cross Theatre was opened in April 1916.  It underwent a remodeling in  1937 and was closed in 1963 when it was converted into a discotheque. It was demolished in 1969. Today the high-rise Chifley Hotel and some retail units stand on the site. 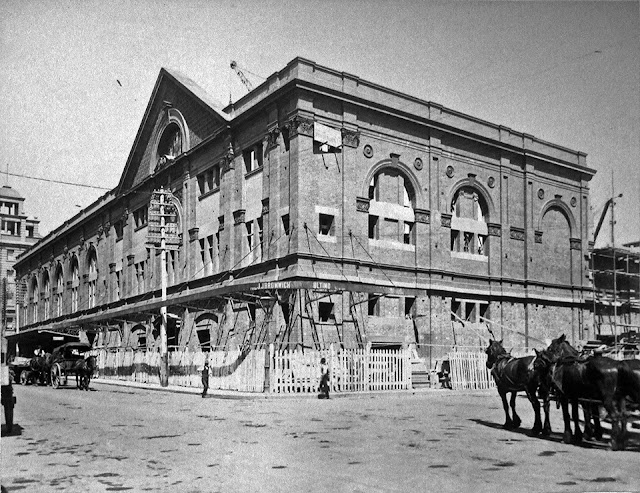 Wirth's Hippodrome, construction 1915. This is now The Capitol Theatre. 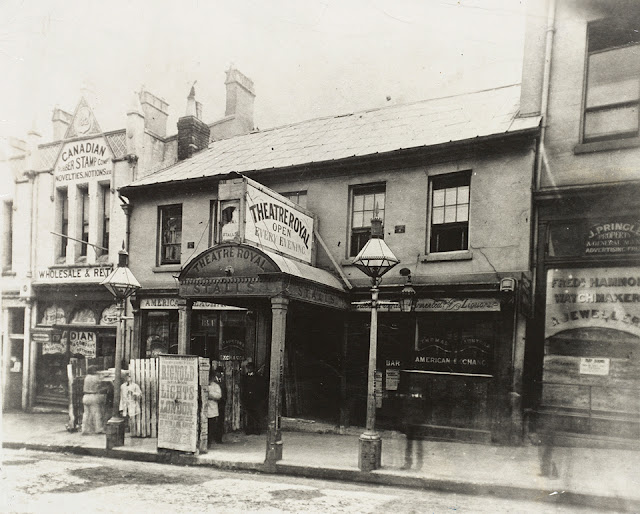 Theatre Royal, King Street entrance. 1882
The Theatre Royal is Australia's oldest theatrical institution located in Sydney, dating from 1833, though the current theatre was built in 1976.
In 1971–72 the theatre, along with the Hotel Australia, and much of the block on which it was situated, was demolished to construct the MLC Centre. Public agitation and action by construction unions once it was closed to save it resulted in the developer Lendlease incorporating a replacement 1,180-seat theatre into the design. 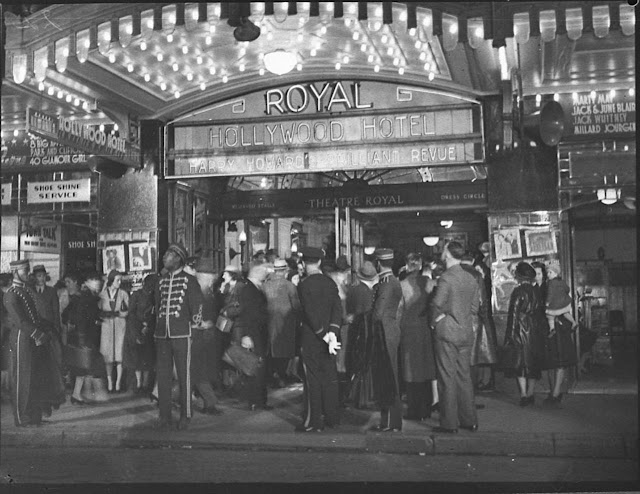 The Theatre Royal Exterior, 23 September 1938 on the opening night of Hollywood Hotel Revue 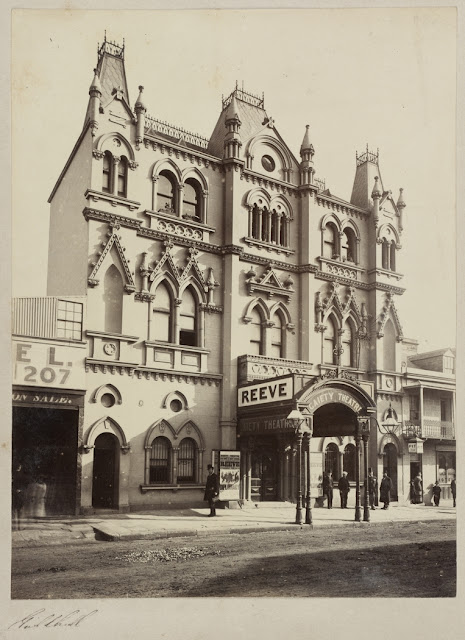 Gaiety Theatre, 1881
Sydney's Catholic Guild built the Victorian Free Gothic style hall on Castlereagh Street. It was then converted into the Academy of Music in 1879 before it was renovated in 1880 and re-opened as the Gaiety Theatre. It closed in about 1893 before it was re-opened again in 1895. It closed again and was operated as an athletic club until 1912 when it was sold to the Catholic Club, Land, and Building Company for 10,000 pounds and then demolished. 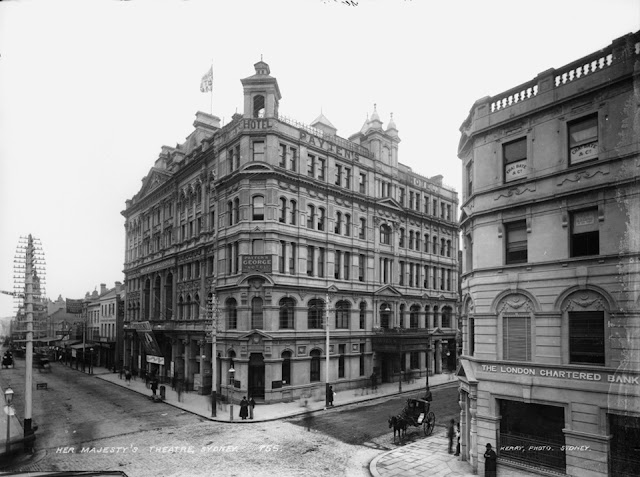 Original Her Majesty's Theatre, Sydney c1899
Her Majesty's Theatre, Sydney, Australia, refers to three theatres of the same name:
1. One was a theatre which opened on 10 September 1887 and closed on 10 June 1933. It was located on the corner of Pitt and Market Street, Sydney, where Centrepoint stands today.
2. The second was located in Quay Street, at the Bijou Lane corner. It had opened with the show Sunny in 1927 as the Empire Theatre. When J. C. Williamson wanted a long run for My Fair Lady, they renamed the theatre Her Majesty's. The theatre barely survived the 1960s and was destroyed by fire.
3. The third was also located on Quay Street, Haymarket, at No. 107 (near Central Station). It opened on 30 November 1973 but is no longer standing. Apartments were built on the site. 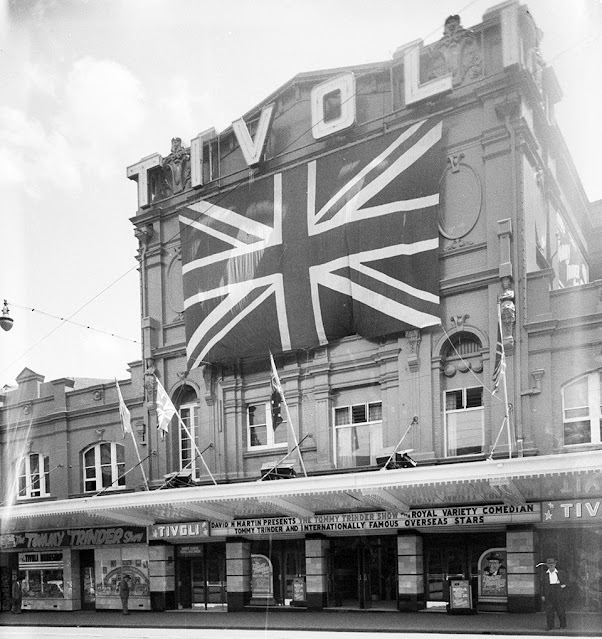 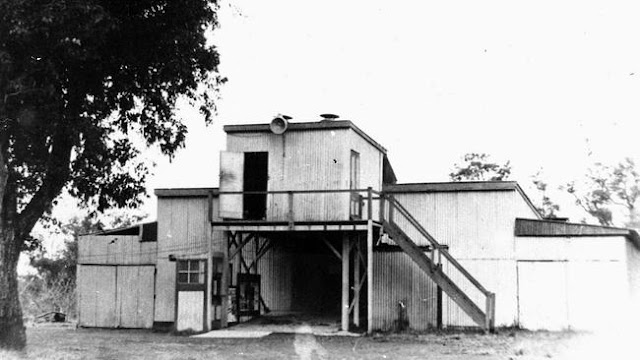 Khartoum Theatre, Macquarie Park (one screen, 480 seats)
Not every movie house built in the 1930s had salubrious art deco finishes and a whirly Wurlitzer putting on the Ritz. The exotically named Khartoum (corner of Khartoum Rd and Waterloo Rd) way out in Macquarie Park hardly had shelter from rain. The Khartoum was an open-air theatre — a type easily found in bush settlements but hardly in new sprawling suburbs. Amid market gardens, farms and waterways, the theatre was on the corner of an orchard and was knocked up with timber and corrugated iron. Entertainment at the interval might be a woodchipping contest, and if heat was needed, fires were cranked up in 44-gallon drums. This had to occur way before opening time to allow smoke to disperse. Known as The Shack, it was popular enough to run until 1966. The Skyline Drive-In opened only a block away in 1956 but, as usual, TV was the deadly competitor.
https://www.dailytelegraph.com.au/news/nsw/sydneys-lost-cinemas-ten-of-the-best-which-enchanted-audiences-before-biting-the-dust/news-story/7298b65c6f0e482c0ae1c0005e88997d
Posted by BytesMaster at 12:36 AM