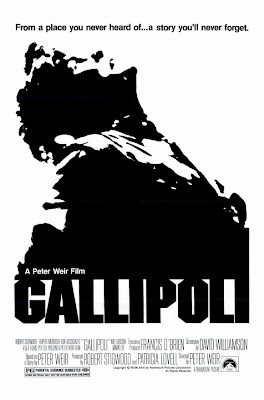 JACK: What are your legs?

JACK: What are they going to do?

ARCHY HAMILTON: Hurl me down the track.

JACK: How fast can you run?

ARCHY HAMILTON: As fast as a leopard.

JACK: How fast are you going to run?

ARCHY HAMILTON: As fast as a leopard!

JACK: Then let's see you do it!

The movie Gallipoli accurately depicts the tragic and futile charge of the 8th and 10th Light Horse Regiments at dawn on 7 August 1915 at the battle of The Nek'. The Nek was a narrow stretch of ridge on the Gallipoli peninsula, the name deriving from the Afrikaans word for a "mountain pass" The terrain was a perfect bottleneck and easy to defend.

The final scenes show the various assault waves being cut down by Turkish machine gun fire as soon as they go “over the top”. The men know that attack is futile and that they have no hope of survival. They leave their belongings such as watches, and last notes to loved ones, pinned to the sandbags by bayonets as they also say their farewells to each other. The end scene shows the young soldier Archie, formerly a stockman and prizewinning sprinter, running at the Turkish trenches as though in a foot race, without his rifle and in sprint mode. As he is cut down by machine gun fire, the movie freeze frames his death in an image that appears to be of him breasting a tape.

That incident is historically accurate, as are most of the military scenes in the movie. Archie’s sprinting at the impenetrable Turkish lines, without his rifle, is recorded by official war historian C W Bean:  “[Wilfred Harper]. . . was last seen running forward like a schoolboy in a foot race, with all the speed he could compass..."

The fuller account in which the above appears, together with some of Bean's other comments about The Nek battle, are as follows:


In an instant the first line, all eagerness, leapt over the parapet. Facing them, not a stone's throw away, were hundreds of the enemy, lining two-deep their front trench and others behind it.

...the instant the light horse appeared, there burst upon them a fusillade that rose within a few seconds from a fierce crackle into a continuous roar, in which it was impossible to distinguish the report of rifle or machine-gun.

Watchers on Pope's Hill saw the Australian line start forward across the sky-line and then on a sudden go limp and sink to the earth 'as though,' said one eye-witness, 'the men's limbs had become string.' Men known and popular, the best loved leaders in sport and work in the West [the 10th LHR was from Western Australia], rushed straight to their death. Gresley Harper and Wilfred, his younger brother, the latter of whom was last seen running forward like a schoolboy in a foot-race, with all the speed he could compass; the gallant Lieutenant Piesse, who had struggled from the hospital ship; two others, who had just received their commissions, Roskams and Turnbull - the latter a Rhodes Scholar.

During the long hours of that day the summit of The Nek could be seen crowded with their bodies. At first here and there a man raised his arm to the sky, or tried to drink from his waterbottle. But as the sun of that burning day climbed higher, such movement ceased. Over the whole summit the figures lay still in the quivering heat.

The bones of the dead still lay out on the narrow ridge in 1919 when Commonwealth burial parties returned to Gallipoli after the war.

The Nek Cemetery (below) now covers most of no-man's land of the tiny battlefield, and contains the remains of 316 Australian soldiers, most of whom fell during the 7 August attack. 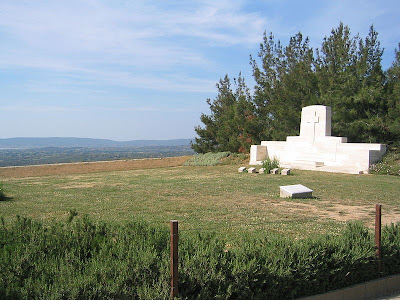 The remains of only five were able to be identified, one of those being Trooper Harold Rush of the 10th Light Horse Regiment who died in the third wave. His epitaph reads "His last words, Goodbye Cobber, God bless you". 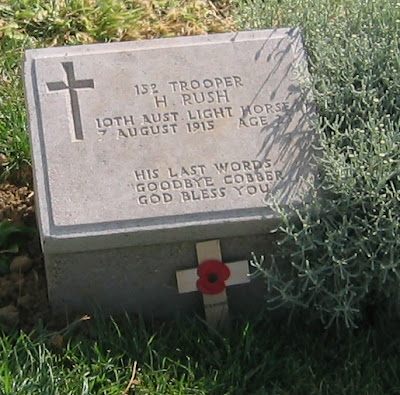 The Ottoman losses were minor in comparison, with only eight Ottoman dead.

This disparity in casualties underscores even further the tragedy and ultimate futility of the Battle of The Nek: the Australian soldiers were not able to return fire, having been ordered to attack with unloaded rifles with fixed bayonets.

Posted by BytesMaster at 9:23 AM