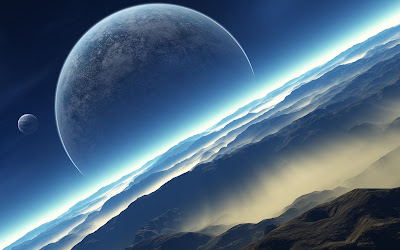 Every atom in your body came from a star that exploded. And, the atoms in your left hand probably came from a different star than your right hand. It really is the most poetic thing I know about physics: You are all stardust. You couldn’t be here if stars hadn’t exploded, because the elements – the carbon, nitrogen, oxygen, iron, all the things that matter for evolution and for life – weren’t created at the beginning of time. They were created in the nuclear furnaces of stars, and the only way for them to get into your body is if those stars were kind enough to explode. So, forget Jesus. The stars died so that you could be here today.
- Lawrence Krauss

"The nitrogen in our DNA, the calcium in our teeth, the iron in our blood, the carbon in our apple pies were made in the interiors of collapsing stars. We are made of star stuff."

I believe… [there is] a fundamental reason why we look at the sky with wonder and longing – for the same reason that we stand, hour after hour, gazing at the distant swell of the open ocean. There is something like an ancient wisdom, encoded and tucked away in our DNA, that knows its point of origin as surely as a salmonid knows its creek.
Intellectually, we may not want to return there, but the genes know, and long for their origins – their home in the salty depths. But if the seas are our immediate source, the penultimate source is certainly the heavens… The spectacular truth is – and this is something that your DNA has known all along – the very atoms of your body – the iron, calcium, phosphorus, carbon, nitrogen, oxygen and on and on – were initially forged in long-dead stars.
This is why, when you stand outside under a moonless, country sky, you feel some ineffable tugging at your innards. … We are star stuff…Keep looking up.
- Gerald D Waxman
Astronomical Tidbits: A Layperson’s Guide To Astronomy, September 17, 2010.