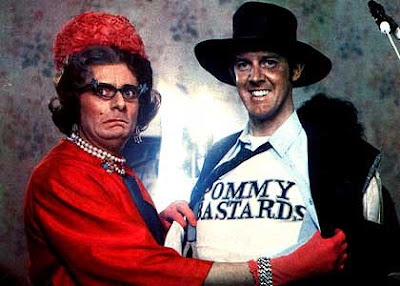 As Barry McKenzie (Barry Crocker), an illegal immigrant, is smuggled into the UK in a van with a group of Indians, he sits next to a young Indian female. Obviously educated, she is reading a book by Immanuel Kant. He tries to start a conversation with her and asks what she’s reading…
Indian Girl: I am studying Kant.
Barry McKenzie: Same here, but I keep failing the practical.
Barry McKenzie Holds His Own (1974)
(At the end of the movie Barry and his aunt, Edna Everidge, return to Australia after having bested Count Von Plasma, the vampire head of an isolated Eastern European dictatorship. Von Plasma had kidnapped Edna after having mistaken her for the Queen of England. At the airport they are welcomed by the then Prime Minister Gough Whitlam and his wife Margaret (the real ones, not actors) with the Prime Minister bestowing upon Edna the title of Dame Edna. When Whitlam and his government had been elected in 1972, one of the first policy decisions implemented was to scrap the imperial ie British, honours system in favour of an Australia one.  Whitlam was later to remark that the title Dame Edna "was the only Imperial honour my government ever conferred."). 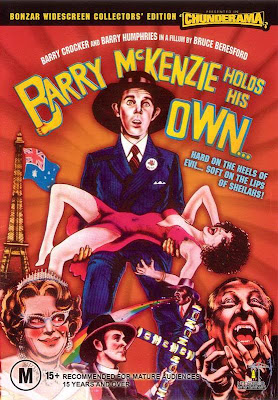 Posted by BytesMaster at 5:11 PM