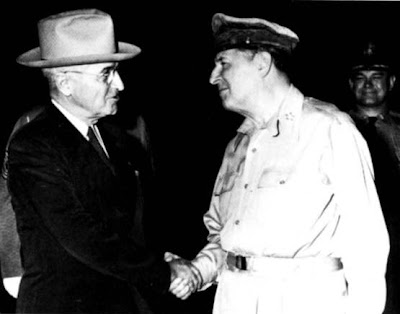 President Harry S Truman meets General Douglas MacArthur, Wake Island, Philippines, 1950
"I fired him because he wouldn't respect the authority of the President. That's the answer to that. I didn't fire him because he was a dumb son of a bitch, although he was…"
President Truman on his removal of General Douglas MacArthur from command in 1951
My father in law, Noel, a history buff who I respect immensely, quoted the above to me in a discussion on history and recommended it to me as a future Bytes item. On looking into it I found that the interest was not just in the quotation but in the facts of the dismissal, the interview that the quote came from and the brutally honest opinions, assessments views expressed by President Truman in that interview.
The following post is lengthy but, I believe, still informative and relevant to today’s political factional intrigues and party power struggles. Witness, for example, the political assassination of Kevin Rudd.

Harry S Truman (1884-1972) was President of the USA in the years 1945-1953. It was under Truman’s presidency that the atomic bombs were dropped on Japan and WW2 was brought to an end. It was also during Truman’s presidency that North Korea invaded South Korea, precipitating the Korean War. The war lasted for 3 years (1950-1953): MASH, set in the Korean War, lasted for 11 years. 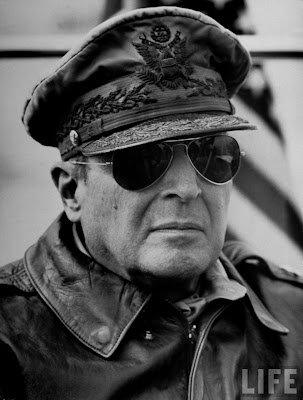 "With deep regret I have concluded that General of the Army Douglas MacArthur is unable to give his wholehearted support to the policies of the U.S. Government and of the U.N. in matters pertaining to his official duties. In view of the specific responsibilities imposed upon me by the Constitution of the U.S. and the added responsibilities entrusted to me by the U.N. I have decided that I must make a change in command in the Far East. I have, therefore, relieved General MacArthur of his command and have designated Lt. Gen. Matthew Ridgway as his successor".

MacArthur accepted the unsurprising news impassively. He said that he had never disobeyed orders, and that his dismissal was a plot in Washington to weaken the American position in the Far East.

MacArthur delivered a farewell address to Congress on 19 April 1951.

The final paragraphs of that address are:


"I am closing my 52 years of military service. When I joined the Army, even before the turn of the century, it was the fulfillment of all of my boyish hopes and dreams. The world has turned over many times since I took the oath on the plain at West Point, and the hopes and dreams have long since vanished, but I still remember the refrain of one of the most popular barrack ballads of that day which proclaimed most proudly that "old soldiers never die; they just fade away."


And like the old soldier of that ballad, I now close my military career and just fade away, an old soldier who tried to do his duty as God gave him the light to see that duty.

Posted by BytesMaster at 1:30 AM