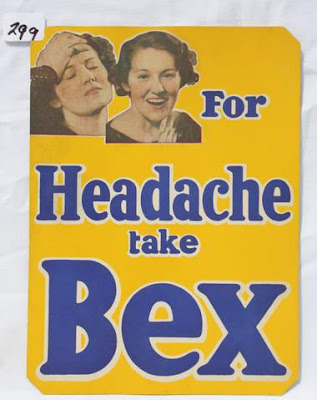 Yesterday I used the expression “A cup of tea, a Bex and a good lie down” when in conversation with my wife, Kate, and my two sons, Thomas and Elliot. The boys are now 22 and 17 respectively and they were nonplussed by the reference to “a Bex”.
Back in the 60’s Bex was the “housewive’s friend”.

What a drag it is getting old
"Kids are different today"
I hear ev'ry mother say
Mother needs something today to calm her down
And though she's not really ill
There's a little yellow pill
She goes running for the shelter of a mother's little helper
And it helps her on her way, gets her through her busy day
(“Mother’s Little Helper”, Rolling Stones)

Back then there were no Panadols, Nurofen et al, just a choice of Aspro tablets or the much stronger Bex powders and its rival Vincents Powders. Bex was the market leader. Both Bex and Vincents tasted nasty, being dissolved in a glass of water and drunk. I remember hearing about an old man who wanted to take a Bex in the park: he poured it into his mouth (it came in folded, unsealed paper saches) and went to the water bubbler for a drink to wash it down, only to find that the bubbler didn’t work.

"Things are different today"
I hear ev'ry mother say
Cooking fresh food for a husband's just a drag
So she buys an instant cake and she burns her frozen steak
And goes running for the shelter of a mother's little helper
And two help her on her way, get her through her busy day

From Wikipedia:
A Cup Of Tea, A Bex and A Good Lie Down was a comedy revue that opened at Sydney's Phillip Street Theatre in 1965. It was the longest running show at the Theatre in 1966. The cast included John Ewart, Gloria Dawn, Ruth Cracknell and Reg Livermore. Written by John Mckellar.
The play's subject matter was Bex, a strong compound analgesic in the form of "A.P.C." or aspirin-phenacetin-caffeine tablets or powder. Bex powders were the housewife’s drug of choice in the 1950s and 1960s until they were shown to be highly addictive and responsible for causing kidney disease when taken in large doses.
The expression 'A cup of tea, a Bex etc.' seems to have gained currency through much of Australia in the post WW2 period when aspirin became readily available. It was often used in the pejorative and abbreviated form 'go and take a Bex' to indicate to an over enthusiast person that they should take a more relaxed attitude to the subject being discussed, or to soothe a frazzled housewife. As such it had currency until very recently in bar room discussions, particularly where one person became animated in expressing a point of view that was contrary to the general view point of the group.

"Men just aren't the same today"
I hear ev'ry mother say
They just don't appreciate that you get tired
They're so hard to satisfy, You can tranquilize your mind
So go running for the shelter of a mother's little helper
And four help you through the night, help to minimize your plight

A review of a 2008 exhibition at Melbourne Museum contains the following: 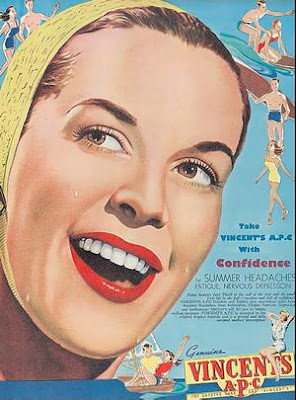 In the 1930s through to the early '70s, Australia was in the grip of a different white powder epidemic to that causing concern these days. It was characterised in the play A Cup of Tea, A Bex and a Good Lie Down, which ran in Sydney for many years, satirising the mid-20th century Australian housewife's drug of choice.
Bex and its analgesic rival Vincent's contained a combination of aspirin, phenacetin and caffeine and were known as mother's little helpers.
[Museum Curator Inara] Waldon said the caffeine made the combination highly addictive but it was the synthetic analgesic phenacetin that caused most problems. In this combination, it was discovered to be cacinogenic and responsible for kidney and liver failure.
Bex and Vincent's were sold over the counter not only without prescription but in corner stores. Such was their addictiveness that some users were consuming 50 powders a day.
Australians were the biggest users of this drug combination in the world and Newcastle, NSW, was the epicentre to such an extent that the affliction became known as the Newcastle Disease.
http://www.theage.com.au/news/national/strongdrugsstrong-an-exhibition-that-could-be-addictive/2008/05/11/1210444241688.html

"Life's just much too hard today,"
I hear ev'ry mother say
The pursuit of happiness just seems a bore
And if you take more of those, you will get an overdose
No more running for the shelter of a mother's little helper
They just helped you on your way, through your busy dying day