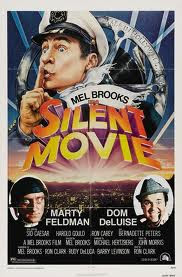 Comment:
There have been a couple of Movie Moments recently that have mentioned silent movies (The Jazz Singer, Wings). It is therefore appropriate to now feature a movie from 1976 that is called Silent Movie but which is technically not a silent film in that it contains one spoken word, plus sound effects. The rest of the dialogue is shown on screen cards, as for original silent movies.
Synopsis:
Noted film director Mel Funn (Mel Brooks), a recovering alcoholic, wants to make the first silent film in Hollywood in forty years. He is told that if he can recruit big name stars he will be allowed to make the movie. He and his sidekicks Dom Bell (Dom Deluise) and Marty Eggs (Marty Feldman) set out to obtain the stars, at the same time fighting the bad guys who want to take over the studio.
Quote:
“Non.”
- Meaning “no” in French, it is the only spoken word in the film and is a response to a request to appear in the new movie, the proposed silent film.  It is spoken by famed French mime artist Marcel Marceau.
Trivia:
Because of the inclusion of the word “Non”, the movie has been listed in the Guinesss Book Of World Records as having the fewest spoken lines of any sound movie. 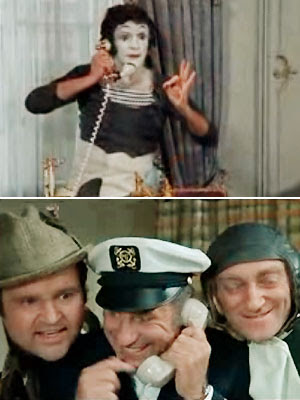 Posted by BytesMaster at 7:19 AM