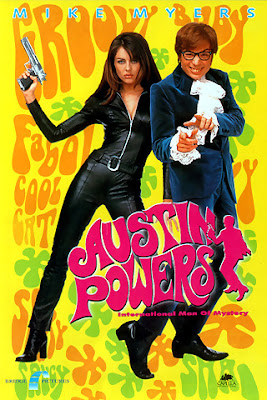 Austin Powers: International Man of Mystery
(1997)
Synopsis:
Austin Powers (Mike Myers), a 1960’s funky secret agent, has himself cryogenically frozen in respone to the freezing of arch villain Dr Evil (also played by Mike Myers).  In that way, Austin can be revived to battle Dr Evil should he ever reappear and threaten the world.  When Austin is thawed to oppose Dr Evil, he finds that the 1990’s and the social attitudes of that time are quite different from the world that he knew.
Quote:
Vanessa Kensington: Mr. Powers, my job is to acclimatise you to the nineties. You know, a lot's changed since 1967.
Austin Powers: No doubt, love, but as long as people are still having promiscuous sex with many anonymous partners without protection while at the same time experimenting with mind-expanding drugs in a consequence-free environment, I'll be sound as a pound!
Trivia:
According to Mike Myers, Austin Powers developed from his flirting with his wife in an English accent one night after coming home from hockey practice. She found it funny and laughed, telling him to write the routine down,so that he could do it again. Writing the routine down led to the script for the movie.

Posted by BytesMaster at 6:03 PM