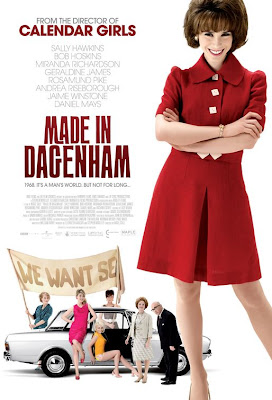 Made in Dagenham (2010)
Comment:
A true story, although the main character is a composite of a number of characters. It is often forgotten that what is today taken for granted as the norm has not always been so, that equality has been achieved by the struggles of those not equal. (And if you want to sound like a true Pom, pronounce it Dagn’m, not Dag-en-ham).
Synopsis:
It’s 1968 and women earn a fraction of what their male counterparts earn for the same work. They are also rated as unskilled whereas men doing the same work are rated as skilled. 187 female machinists at Dagenham Ford motor plant go on strike, demanding equality and respect. Opposed by husbands, male co-workers, management, unions and government, 187 courageous females with ordinary lives and from ordinary backgrounds, remain steadfast in their demand for justice.
Quotes:
“We gotta demand pay that reflects the job you do, not whether you got a dick or not.”
Journalist 1: What if the minister says no deal?
Journalist 2: Yeah, how will you cope then?
Rita O’Grady: Cope? We're women. Now don't ask such stupid questions.
Trivia:
At one point in the movie the striking women unfurl a banner which says “We want Sexual Equality.” Because the banner is not fully unfurled, it reads “We Want Sex.” This was the working title for the movie when it was in production and it was actually released in Germany under that name, causing numerous young males to leave in disgust when they realised it wasn't a porno flick.

Posted by BytesMaster at 9:46 PM