Some thoughts about the end of the world. . .


(This topic was suggested  to me by my father in law, Noel, who may or may not have had a bag packed). 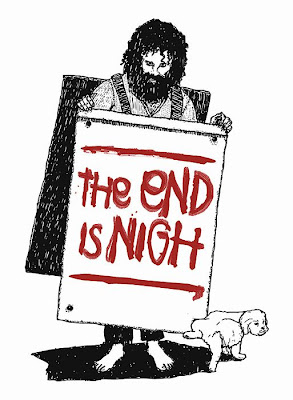 
The prophecy of the end of the world ended with a whimper, not a bang, Saturday as life went on as usual despite warnings of Judgment Day by a US preacher which provoked panic in some quarters and parties in others. Televangelist Harold Camping had insisted the so-called "Rapture" would begin with powerful earthquakes at 6:00 pm local time in each of the world's regions, with worthy souls transported to heaven. According to the 89-year-old and his religious broadcasting network Family Radio, the not-so-good were to suffer hell on earth until October 21, when God pulls the plug on the planet once and for all.
In the US . . . suicide prevention hotlines had been set up, according to the Washington Post, amid fears despondent Family Radio followers would be depressed if the apocalypse fails to materialise.
New York City Mayor Michael Bloomberg -- who is Jewish -- said on his weekly radio show that he would suspend alternate side street parking if the world ends on Saturday. The much-reviled parking rule requires New Yorkers to move their cars from one side of the street to the other to allow street cleaning to take place.
And some were cashing in on money-making opportunities. The Craigslist website ran tens of thousands of ads from non-believers offering to buy the worldly goods of those who think they're going to heaven, while a group of US atheists has sold hundreds of contracts to rescue people's pets.
The group American Atheists was hosting rapture parties around the country but also warned of the danger of following Camping's predictions. "We're going to poke fun at these people, but in the end we need to keep in mind that there are people being hurt here," said David Silverman, president of the US-based group. "We're hoping people look at this and learn to use their brains ... so we don't have an occurrence of this in 2012," when some believe the Mayas predicted the Earth's demise.
Sydney Morning Herald,  22 May 201
http://news.smh.com.au/breaking-news-world/apocalypse-not-doomsday-prediction-falls-flat-20110522-1eyil.html1-05-22 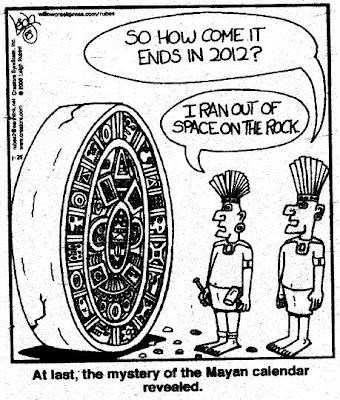 “Don't worry about the world coming to an end today. It is already tomorrow in Australia.”
-  Charles M Schulz

Posted by BytesMaster at 7:29 PM