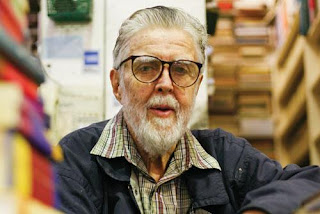 A FEW hours after Bob Gould's death at age 74 yesterday, the doors to his Newtown bookstore were open to the public.
''That's what Bob would have liked,'' said his daughter, Natalie Gould. ''He loved books and this place has been his life. Keeping it open is the best thing.''
The secondhand bookseller and left-wing activist had been frail for some time, but still worked at the store a couple of hours most days. He was sorting through his own books at the store, when he fell and injured his head. By the time the ambulance arrived, it was too late. Friends and relatives gathered at the store yesterday with his wife, Janet Bonser.
http://www.smh.com.au/entertainment/books/end-of-cultural-chapter-as-beloved-bookseller-dies-at-74-20110522-1ez1f.html#ixzz1N7HkXJNs

I was sorry to read that Bob Gould had passed away. Both he and his bookstore, Gould's Book Arcade in Newtown (named after the famous and historic Cole’s Book Arcade in Melbourne), were Sydney icons and it is always sad when an icon disappears from the scene.
Some personal anecdotes:
Bob was a renowned leftie and avowed Marxist, always in attendance whenever there was a protest or demonstration during my uni days. This is a pic of one of those times, Bob being the person at the front: 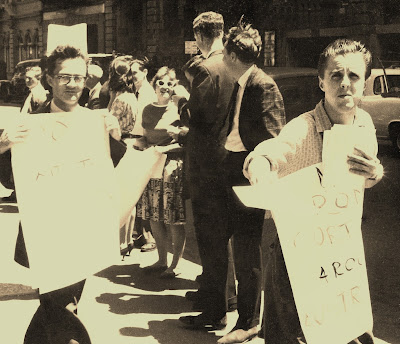 Indeed, Bob was one of the chaps who apprehended Peter Kocan after he shot the Federal Opposition leader, Arthur Calwell, in 1966.  Bob had been at the protest meeting at the Mosman Town Hall.
In the 1980’s I lived in Petersham, close to the bookshop he then had in Parramatta Road. That is where I hired my videos. One evening, as I was paying for videos I was hiring, Bob remembered that I was a lawyer and asked me for my opinion of Newtown as a commercial area. I said that I thought it was a nice suburb, that it would develop significantly in the future in that it was close to the city and the university. I asked why he was interested and he said “I’ve bought a large building there and I’m moving this business there.” Bob may have been a Marxist but he also typified Lloyd George’s statement that “A young man who isn’t a socialist hasn’t got a heart; an old man who is a socialist hasn’t got a head.”
Gould’s Book Arcade has to be experienced to e believed. Books are stacked on the floor, shelves, piles upon piles of books. There are also CD’s, DVD’s,b records, tapes, posters. . . 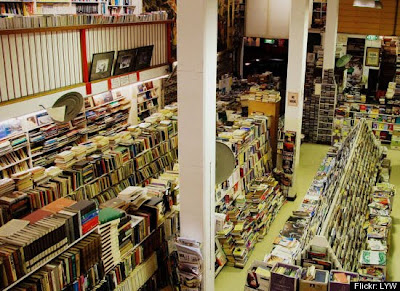 When I took my wife to the Newtown store for the first time after she moved from Canberra, her initial response was “I don’t believe this.” Quoting Al Jolson – “You ain’t seen nothing yet” – I removed some of the books on a nearby bookshelf to reveal even more books behind. On a lot of the shelves the books are actually stacked two deep.
On one occasion when he was at Petersham I asked Bob if he had a particular video. His response was “Dunno mate, you’ll have to look for yourself. That’s how I keep prices down.”
This was also the response in his Newtown store when I asked him to let me have a particular book which he said was in store in the ‘Political’ section.
This was ironic in that his prices weren’t that cheap.
In both the Petersham and Newtown stores Bob sat on a large chair that was on a dais, behind the counter. He literally looked down on his customers, much like a judge at a raised bench or a king on a throne, albeit surrounded by books as though in an alcove: 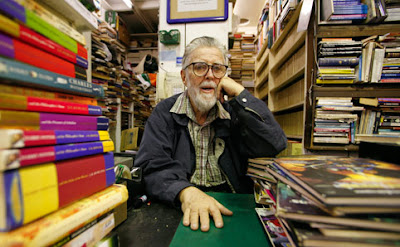 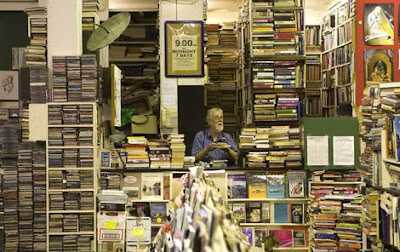 A couple of years ago I went to the Newtown shop with my wife, only to find that the place was quite dark as the result of a blackout that affected the neighbourhood.  We went in nonetheless and saw that it was so dark that it wasn’t possible to read the spines of the books.  That didn’t stop Bob.  He had a basket with torches in front of him and passed torches to customers from his elevated position on his throne.  Customers did their browsing with issued torches in a darkened shop, the torch beams sometimes looking like night aerial searchlights out of a WW2 movie.

What’s the bet that Bob, in whatever direction he has gone, has already set up a bookshop and is telling people to find things for themselves. 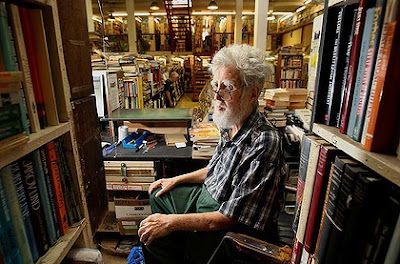 Posted by BytesMaster at 7:59 PM