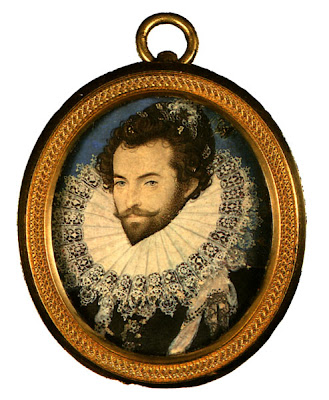 Sometimes you come across a tiny bit of information that causes you to see something, or someone, in a completely new or different light. Like first finding out that Bob Hawke, whilst a Rhodes scholar at Oxford, set a Guinness record for drinking 2.5 pints of beer in 11 seconds (“"In a political sense, it was one of the big advantages I got out of my time at Oxford. It endeared me to a large section of the Australian voting population that I had a world beer drinking record.” - Bob Hawke). Or that actor Jack Nicholson only discovered that his "parents" were actually his grandparents, the person he believed to be his sister actually being his mother. He discovered this only after being informed by a journo from Time doing an article on him.
So it is with an item I came across about Sir Walter Raleigh (1552-1618) pictured above, and his son, also named Walter.
Before looking at that item, a brief biography is in order.
Off the web:

Sir Walter Raleigh was one of the grand scalawags of the Elizabethan Age. He made a name for himself fighting the Irish at Munster; later he was introduced at court and became a favourite of Queen Elizabeth 1. Known for his wit and womanising, Raleigh was in and out of Elizabeth's favour. (According to a famous legend he once laid his plush and expensive cloak over a mud puddle so that the Queen's feet would not be dirtied; the legend has long been disputed, but it may actually be true.) He also organised expeditions to the new world, popularised tobacco, and found time to write poetry on the side. Raleigh was not a favourite of Elizabeth's successor, James 1, who kept Sir Walter imprisoned in the Tower of London for years and finally had him beheaded in 1618. After Raleigh's execution, his head was embalmed and returned to his wife... Some sources say on the day he was beheaded Raleigh was granted a last smoke of tobacco -- establishing the tradition of giving a prisoner a last cigarette before execution.
http://www.infoplease.com/biography/var/sirwalterraleigh.html

The above summary omits that between imprisonment and beheading, James 1 released Raleigh to enable him to conduct an expedition to Venezuela to seek the fabled city of gold, El Dorado. During the expedition Raleigh’s men attacked a Spanish outpost and Raleigh’s son Walter was killed in the attack. On Raleigh's return to England, the outraged Spanish ambassador successfully demanded that King James reinstate Raleigh's death sentence.
The following story about Sir Walter and his son, commonly known as Wat, is written in the original format and is taken from John Aubrey’s “Brief Lives”, a collection of biographies from about 1680: 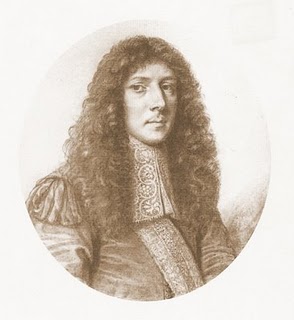 My old friend James Harrington, esq. was well acquainted with Sir Benjamin Ruddyer, who was an acquaintance of Sir Walter Ralegh's. He told Mr. J. H. that Sir Walter Ralegh being invited to dinner to some great person where his son was to goe with him, he sayd to his son "Thou art expected to-day at dinner to goe along with me, but thou art such a quarrelsome, affronting creature that I am ashamed to have such a beare in my company." Mr. Walter humbled himselfe to his father, and promised he would behave himselfe mighty mannerly. So away they went (and Sir Benjamin, I think, with them). He sate next to his father and was very demure at least halfe dinner time. Then sayd he, "I, this morning, not having the feare of God before my eies but by the instigation of the devill, went to a whore. I was very eager of her, kissed and embraced her, and went to enjoy her, but she thrust me from her, and vowed I should not, ‘for your Father lay with me but an hower ago’.” Sir Walter being strangely surprised and putt out of his countenance at so great a table, gives his son a damned blow over the face. His son, as rude as he was, would not strike his father, but strikes over the face the gentleman that sate next to him and sayd "Box about: 'twill come to my father anon." *  'Tis now a common-used proverb.

* Translation: He struck the face of the man sitting next to him and said “Keep passing it along, it will get to my father quickly enough.”