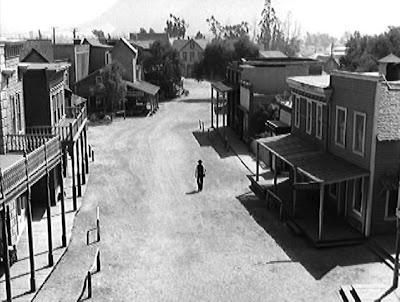 High Noon (1952)
Comment:
Not only a good western and a good film generally, although it remains hated by rednecks even today, it is also interesting in a number of respects:
·       Gary Cooper was nearly 30 years older than his love interest.
·       The love interest was Grace Kelly, to become Princess Grace of Monaco.
·       The film was released whilst the McCarthy Communist witch hunts were in progress and after the Korean War had begun.
·       Screenwriter Carl Foreman was blacklisted by Hollywood for refusing to cooperate with the House of Un-American Activities Committee (HUAC).  He refused to name names and pleaded his Fifth Amendment rights.
·       The film was a disappointment to many at the time because it lacked open spaces and western landscapes, action scenes and violence as were normally depicted in westerns.  Instead, it focused on emotions, message and dialogue, with action at the end.
·       Bill Clinton cited this as his favourite film and screened it a record 17 times when he was President.
·      The film was a comment on the failure of Hollywood personnel to stand up to the HUAC, McCarthy and to the blacklisting of 300 of its own.
Synopsis:
A sheriff, Will Kane, newly married to a pacifist Quaker and retiring that day, learns that Frank Miller, a man he jailed and who threatened to come back to kill him, is coming in on the noon train.  Three of Miller’s friends are at the station to meet him.  When he seeks assistance he is shunned by the townspeople and by his new bride.
Quote:
Judge: This is just a dirty little village in the middle of nowhere. Nothing that happens here is really important.
Link:
The ending:
http://www.youtube.com/watch?v=ty-a60VUfV4
Trivia:
Both John Wayne and director Howard hawks disliked High Noon so much that they filmed Rio Bravo in 1959 as a response.  According to Hawks: “I made Rio Bravo because I didn’t like High Noon. Neither did Duke. I didn’t think a good town marshal was going to run around town like a chicken with his head cut off asking everyone to help. And who saves him? His Quaker wife. That isn’t my idea of a good western.”
Wayne went further.  Although he collected Cooper’s Best Actor Oscar in 1953, he commented in a 1971 Playboy article “Everyone says High Noon was a great picture because [Dmitri] Tiomkin wrote some great music for it and because Gary Cooper and Grace Kelly were in it. In the picture, four guys come in to gun down the sheriff. He goes to church and asks for help and the guys go, ‘Oh well, oh gee.’ And the women stand up and say, ‘You rats, you rats.’ So Cooper goes out alone. It’s the most un-American thing I ever saw in my whole life. The last thing in the picture is ole Coop putting the United States marshal’s badge under his foot and stepping on it.
Actually, Cooper drops the Marshall’s badge in the dust, he doesn’t step on it.  The message is the same in any event.  Rio Bravo was quite different to High Noon.  Wayne plays a Sheriff holding a prisoner.  The prisoner’s brother and friends are coming to set him free.  Wayne plays the Sheriff as standing tall, unafraid, alone, who is offered assistance but refuses it, a man having to do what a man has to do.  Wayne was disappointed that he had not been offered the part of Will Kane in High Noon in that, according to Wayne, he could have made it more like one of his own westerns.
His dislike may also have been personal.  Wayne was President of the Motion Picture Alliance for the Preservation of American Ideals (MPA), which was founded to combat what it believed was the increasing domination of the film industry by Communists.  As President he stated “Let no one say that a Communist can be tolerated in American society and particularly in our industry. We don't want to associate with traitors.”  He and the MPA supported the blacklisting and HUAC’s witch hunt.